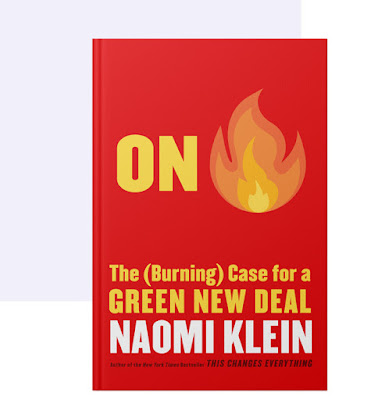 Twenty years after No Logo, and five years after This Changes Everything, On Fire explains how the bold ideas and action within the Green New Deal could avert climate catastrophe and be a blueprint for a just and thriving society.

Naomi Klein’s seventh book, On Fire: The Burning Case for a Green New Deal gathers for the first time Naomi’s impassioned reporting from the frontlines of climate breakdown, and pairs it with new material on the high stakes of what we choose to do next.

Published in hardcover in the US, UK and Canada in 2019, it was an instant New York Times bestseller and was serialized in The Guardian UK and in the Covering Climate Now news syndicate worldwide. Naomi completed a multi-country book in 2019/early 2020.  The paperback was released in 2020 with a New Foreword written during the Covid-19 Pandemic.

Jane Fonda said, “I didn’t know this [book] would change my life.  It told me what I had to do, and it motivated me to do it.”

Watch the Emmy nominated viral video “Message from the Future” produced by Naomi about the Green New Deal, co-written and narrated by Rep. Alexandria Ocasio-Cortez.

For more than a decade, Naomi Klein has documented the movement of the climate crisis from future threat to a burning emergency.  She has been among the first to make the case for what is now called the Green New Deal – a vision for transforming our economies to battle climate breakdown and rampant inequality at the same time. In our era of rising seas and rising hate, she argues that only this kind of bold, roots-up action has a chance of rousing us to fight for our lives while there is still time.

On Fire’s long-form essays, based on her extensive research and reporting, show Klein at her most prophetic and philosophical, investigating the climate crisis not only as a profound political challenge but as a spiritual and imaginative one as well. Delving into the clash between ecological time and our culture of “perpetual now”; the soaring history of rapid human change in the face of grave threats; rising white supremacy and fortressed borders as a form of “climate barbarism” and more, this is a rousing call to transformation – and a dire warning about what awaits if we fail to act.

With dispatches from the ghostly Great Barrier Reef to the smoke-choked skies of the Pacific Northwest, to post-hurricane Puerto Rico, to a Vatican waking up to the case for radical change, recognizing that we will rise to the existential challenge of climate change only if we are willing to transform the systems that produced this crisis — On Fire captures the burning urgency of the climate crisis, as well as the fiery energy of a global movement demanding a catalytic Green New Deal.

Learn about the Green New Deal in The Leap’s online book club for On Fire. Over three webinars the bookclub speakers dove into topics like wealth redistribution and reparations; tapping into the power of strikes to win a Green New Deal; what big tech has to do with the climate crisis; and more. The line-up of speakers — including brilliant writers, organizers, and journalists — spanned movements and geographies and ended with a live Q&A with Naomi. Watch all three bookclub webinars here: http://theleap.org/book-club