OH! PEGGY GUGGENHEIM AND THE GHOSTS OF THE UNFINISHED PALAZZO

Peggy Guggenheim wasn’t the first woman to own Palazzo Venier dei Leoni, the distinctive building that now houses her art collection. The two who preceded her — Marchesa Luisa Casati and Lady Doris Castlerosse — were equally colourful 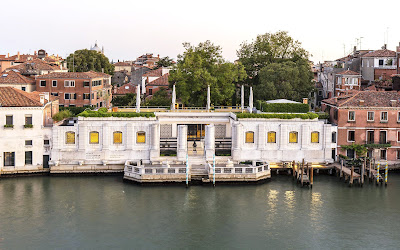 On the eastern stretch of the Grand Canal, as it widens out towards the lagoon, the Venetian waterfront becomes a riotous profusion of colours and styles. From Gothic palazzos decorated with mosaic and latticed stone to grandly classical façades and a listing assortment of dusky stucco villas, an entire history of architectural invention is on display.

There is one building, however, that stands out for its unusual restraint. The Palazzo Venier dei Leoni, home of the Peggy Guggenheim Collection, is a long, low structure, one storey high. Its lines are so clean and its walls so gleamingly white that many visitors assume it must have been built during the last century. Yet the palazzo has a past as richly chequered as most of its neighbours, dating back to 1749 when plans were drawn up for its construction.

The Venier family, who commissioned it, ranked among Venice’s most powerful dynasties, and their new palazzo — five storeys high and strutting with pillars and pediments — was intended as a monument to the family name. Yet as work began around 1751, it came to an abrupt halt.

It is possible that the builders failed to lay foundations deep enough to support the palazzo’s weight, but equally likely that construction was brought to a standstill by a decline in the family’s fortunes or their failure to produce a new generation of male heirs — and then, before work could be restarted, Napoleon invaded the city.

Whatever the cause, the Venier palazzo was left at a dwarfsh approximation of its intended size. Over the years, as it was sold off to different owners, deterioration set in. Ivy covered the walls, sections of the roof began to cave in, and the basement was converted into a cheap boarding house.

It became known in the neighbourhood as the palazzo non finito — the unfinished palace — and it might have been demolished, excised from history, but for the three women who came to inhabit it during the 20th century. They did so with a style and a sense of female entitlement unimaginable to its original, male owners.

The first of the trio was Luisa Casati, who came to the palazzo in 1910. Luisa was one of the wealthiest women in Italy, having inherited her father’s industrial fortune. As the wife of the Marchese Camillo Casati, she was allied to the highest ranks of Italian nobility. Yet after falling under the spell of the notorious writer and aesthete Gabriele D’Annunzio, Luisa had turned her back on conventional society and, with a passion that bordered on profound eccentricity, vowed to turn her life into a work of art.

Venice was to be her theatre, the romantically derelict Venier palazzo her stage. Luisa hired an army of workmen to transform the interior into a dazzle of marble, glass and gold, but she was determined to retain the building’s dirty, overgrown and crumbling exterior.

Further evidence of Luisa’s maverick taste was revealed in the menagerie of pets that she began to gather around her — parrots, monkeys, snakes and peacocks, plus a flock of albino blackbirds that she would dye different colours to suit her mood. Most beloved of these pets was the elegantly spotted cheetah that accompanied her everywhere.

Crowds would gather to stare as they floated about together in a gondola or processed through the Piazza San Marco, the cheetah kept under control by a tall manservant, Luisa dressed in costumes — many of them created for her by the Ballets Russes designer Léon Bakst — that ranged from a commedia dell’arte harlequin to a Persian princess. 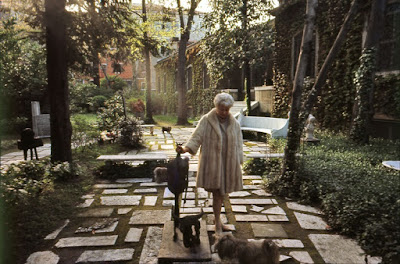 Luisa spent recklessly and, beyond the sums she lavished on her wardrobe, she hosted parties of astounding extravagance. Many were held at the palazzo, but the one that entered Venetian folklore was the 18th-century costume ball for which Luisa took over the whole of Piazza San Marco, hiring 200 black servants, all dressed by Bakst, to hold back the watching public.

As Luisa turned her daily life into a performance she commissioned artists to record her progress, amassing a portrait gallery that included photographs by Man Ray, paintings by Kees van Dongen and Augustus John, and a bust sculpted by Jacob Epstein..................