AND MEET THE NEANDERTHALS AT THE MOESGAARD MUSEUM, DENMARK 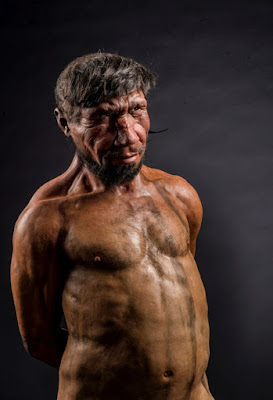 Because the Covid19 (Corona) situation, Moesgaard Museum will be closed to visitors until and including 1 March. Read more.

Once again, Moesgaard addresses one of the great stories in world history. This time taking a huge step back in time and looking deep into human evolutionary history.

The special exhibition Neanderthal – In the land of the mammoth hunters tells the story of the Neanderthals, about their lives and their meeting with Homo sapiens, modern humans, and what this has meant for human cultural and genetic development. The Neanderthals are our closest extinct relatives, and they lived in Eurasia from 300,000 to 40,000 years ago.

“The Neanderthals have acquired an almost iconic role in human evolutionary history, and the latest research takes us ever closer to who they were and, with that, what it means to be human. Especially since the discovery that we all carry traces left by the prehistoric encounters with the Neanderthals in our DNA, interest has only grown. The Neanderthals, together with our other evolutionary relatives, therefore play an important role in positioning us in the great and temporally deep world scheme,” says project leader, Dr Trine Kellberg Nielsen, who is an archaeologist specialising in Neanderthal research.

In connection with the exhibition, Moesgaard Museum has been fortunate in persuading Trine Kellberg Nielsen to return home to Denmark from Germany, where she has worked at the University of Cologne and at the Neanderthal Museum in Mettmann near Düsseldorf.

Trine Kellberg Nielsen senses a huge current interest in the Neanderthals, both from researchers and the general public.

“We want to react to this fascination by creating an exhibition in which we get very close to who the Neanderthals were, and what they actually mean for us and our own human species. The exhibition will focus on the last 120,000 years, a time characterised by the beginning of the last ice age, and we will tell the story of the Neanderthals’ life and their ability to adapt in a time of enormous climatic challenges. Their resourcefulness and ingenuity often astonish, because research has shown that the true picture of them is far removed from the primitive cave dwellers with which most people are familiar. We will also tell the story of when the Neanderthals met other humans such as Homo sapiens and the newly discovered Denisovans, and the traces these encounters have left in our own DNA today. And we will follow the demise of the Neanderthals and examine the theories about why they disappeared, while Homo sapiens survived. Our aim is for the exhibition to be an evolutionary sensation and a journey through a totally different world in a completely different time,” says Trine Kellberg Nielsen.

“The world we will meet in the exhibition will be utterly different to the one we know today – populated by different humans and long-extinct animals, living in a landscape that changed dramatically from interglacial to glacial times. Even though everything will seem foreign and strange, one of the most significant new discoveries in recent research is that the Neanderthals had much more in common with modern humans than was previously thought. It is therefore our hope that the exhibition can focus attention on the entirely fundamental question of what it is to be human,” says director of Moesgaard Museum, Mads Kähler Holst.

The special exhibition Neanderthal – In the land of the mammoth hunters opens  November 17, 2020 with support from Augustinus Fonden, Aage og Johanne Louis-Hansens Fond, Spar Nord Fonden, Knud Højgaards Fond, KrogagerFonden and Beckett-Fonden. It will be developed by Moesgaard Museum in collaboration with the Neanderthal Museum in Mettmann, Germany.

The Neanderthal exhibition can be seen at Moesgaard Museum from November 17. 2020 until October 24, 2021.