‘ALL SHE HAD TO DO WAS COME ON STAGE AND EVERYTHING BURST INTO LIFE, FIRE AND FLAMES’, SAID YVES SAINT LAURENT ON ZIZI JEANMAIRE

The YSL wardrobe of the impossibly chic Parisian ballerina, chanteuse and fashion muse is offered online until 26 January

Every fashion designer has his or her muse. Yves Saint Laurent, who revolutionised womenswear with the female trench coat, tuxedo, pantsuit, safari jacket and jumpsuit — and whose art collection, assembled with his partner Pierre Bergé, sold for nearly €374 million at Christie’s in Paris in 2009 — had several. 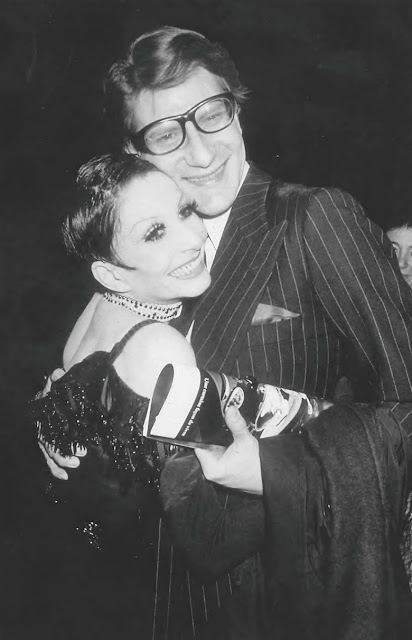 Victoire Doutreleau, Betty Catroux, Loulou de la Falaise and Mounia are among the most frequently mentioned. Yet Zizi Jeanmaire, the ballerina and chanteuse known for her pixie cut and enviably long legs, who led the applause after Saint Laurent’s first show under his own name in 1962, was no less a part of his inner circle.

As well as creating Jeanmaire’s stage costumes — ‘covering her in spangles and framing her with feathers in ways that seemed to nod to 19th-century nightlife as documented by Henri de Toulouse-Lautrec’, according to Vogue — Saint Laurent designed Jeanmaire’s chic, monochrome off-stage wardrobe.

The sale focuses on these tuxedos, trench coats, pussy-bow blouses and wraparound dresses, as well as a number of sparkling evening designs including a cocktail dress with beaded fringes from 1969 and a short dress, below, embroidered with beads and sequins, from Saint Laurent’s groundbreaking 1967 African collection.

‘There’s a story behind this dress,’ says de Foresta. ‘Jeanmaire originally wore a long, openwork version to meet Queen Elizabeth II following the premiere of one of her husband Roland Petit’s ballets, starring Rudolf Nureyev. But Petit thought it was too revealing, so they exchanged it for this version.’

Renée Jeanmaire was born in Paris on 29 April 1924 to Swiss parents. Her father was a self-made businessman; her nickname was given to her in early childhood by her mother.

Enchanted by a production of Gounod’s Roméo et Juliette, she enrolled in the ballet school of the Opéra de Paris at the age of nine — where she first met Petit, who was three months older. She joined his new company, Les Ballets de Paris, in 1948, and insisted he create ballets for her.

The result was Carmen, with Jeanmaire in the title role — and when it premiered on 21 February 1949 at the Prince’s Theatre in London, her cropped hair, corseted costume and sizzling performance caused a sensation. The production toured to the US, where it ran for more than 115 performances on Broadway. Jeanmaire, who married Petit in 1954 and had a daughter, Valentine, with him one year later, would continue to dance in his ballets into her fifties.

Dancing wasn’t Jeanmaire’s only talent. When injury forced her to rest, she worked in secret on her voice, knowing that Petit needed a dancer who could sing for his new ballet, La Croqueuse de Diamants. Having secured the role, she won the Grand Prix du Disque for the title song and went on to record 30 albums. Poets and songwriters such as Louis Aragon and Serge Gainsbourg were seduced by her husky voice. As Aragon said, ‘Paris wouldn’t be Paris without her.’

The Hollywood actress and cabaret star

Back in the US, she was introduced to Howard Hughes, which led to roles in Hans Christian Andersen (1952) with Danny Kaye and Anything Goes (1956) with Bing Crosby. It is as a cabaret singer and dancer in the music halls of Paris, however, that she is best known — singing Mon truc en plumes (literally ‘My thing in feathers’) at the Alhambra theatre in Paris in 1961, backed by 12 male dancers carrying pink ostrich feathers, and performing in countless other revues created around her by Petit.

It was Saint Laurent who designed Jeanmaire’s stage costume for that famous performance at the Alhambra; he had also watched her in Carmen  back in 1949. ‘The production was a scandal,’ he recalled. ‘The cigarette girls all came on smoking. I have an enormous tenderness for Roland and Zizi. They really marked my youth artistically.’

The friendship he felt for the singer and dancer is manifest in the black jersey jacket he created for her in 1975, monogramming the initials ZZ on the top left pocket after experimenting with several designs. ‘My dear Zizi,’ he wrote to her, ‘I have been entertaining myself by creating variations on your name. I am thinking of you as you can see and send my fondest love.’

For her part, Jeanmaire attended every major Yves Saint Laurent event — whether smiling broadly in a black tuxedo dress at the launch of the perfume Kouros in 1981 with Jerry Hall and other supermodels, or laughing helplessly in a black skirt tuxedo on the maison’s 30th anniversary in 1992 as she cut the cake with Saint Laurent, Bergé and Deneuve.

By the time of her death, on 17 July 2020, at the age of 96 — 12 years after Saint Laurent and nine after Petit — she was many things: a Chevalier des Arts et des Lettres, an Officier de la Légion d’Honneur and a Commandeur de l’Ordre National du Mérite.

As the writer Boris Vian said of her: ‘She has eyes that could empty a monastery of Trappist monks in five minutes and a voice that could only come from Paris. She’s a sequinned siren, a divine dancer, a true force of nature.’