Life in Palmyra did not stop in the third century but has gone on more or less continuously at the site for the 1,700 years since. 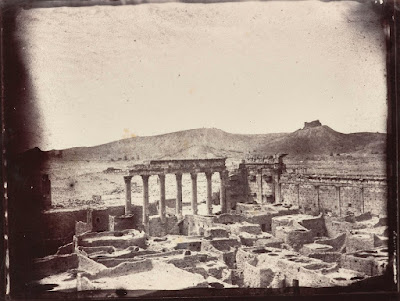 If news outlets thrust the ancient Syrian city of Palmyra (known as Tadmur in Arabic) into the public eye in 2015, when it was captured by ISIS, then museums have helped keep it there ever since. Most recently, the Getty Research Institute launched the online exhibition Return to Palmyra. Promotional material says the exhibition “re-presents” the Getty’s first online exhibition, The Legacy of Ancient Palmyra, from 2017. As with that earlier exhibition, Return to Palmyra centers on two rich sets of material illustrating Palmyra that the Getty owns: 18th-century etchings made after drawings by Louis-François Cassas (acquired in 1984); and 19th-century photographs by Louis Vignes (acquired in that fateful year of 2015). All of these, of course, are put in context of the recent devastation of the site during the Syrian Civil War.

One drawback of the original format of the exhibition was that it almost completely ignored life in post-classical Palmyra, which did not stop in the third century but has gone on more or less continuously at the site for the 1,700 years since. This absence was striking, since the Getty’s collections provide a wealth of detail about the Ottoman-period village at Palmyra, including the only known plan of the village’s mosque, in the cella of the Temple of Bel. The Getty’s prior focus on Roman-era Palmyra was so extreme that at least one reviewer concluded that the city was long deserted by the 19th century, merely hosting Bedouin squatters.

So, how does the re-presentation compare? At first, it appears mostly the same. The “exhibition” portion of the site is a verbatim copy of the earlier exhibition, with the added feature of an Arabic translation of the original text. The rich recent history of Palmyra and its people is still ignored.

Now, however, there is an added essay by curator Joan Aruz, entitled “Palmyra: Caravan City and Cultural Crossroads.” The focus is on the classical city, but Aruz also looks briefly at the rest of its history. Unusually, Aruz mentions that there was a village centered on the Temple of Bel compound into the 1930s and that the French (who controlled Syria under a League of Nations mandate) forcibly relocated the inhabitants at that time to a new town adjacent to the ancient ruins, in the name of excavation and preservation.

That recent history of the site is also pointedly referred to in a featured interview, conducted with Waleed Khaled al-As’ad, son of the archaeologist Khaled al-As’ad (murdered by ISIS in 2015 — because of his ties to the government and the Ba’ath party, not, as was rumored, because he refused to reveal the location of treasures for ISIS to destroy or loot). Al-As’ad’s family is from Palmyra — he can trace them back six generations in the town — and he himself grew up there. “To be the child of such a place, and to have lived alongside these great monuments,” al-As’ad reflects, “… is always a point of happiness and pride.” The interview also touches on the fate of the contemporary town: four years after Syrian and Russian forces pushed ISIS out, the city still lies in rubble; al-As’ad suggests only 1,000 to 1,500 inhabitants are left, of the tens of thousands who lived there before the war.

The exhibition, and the images it contains, are visually impressive. But this visual impressiveness of Palmyra’s ancient past has also served propaganda purposes for all sides in the Syrian Civil War: ISIS, the Syrian government and Russia (as restorers of cultural heritage), and the US and UK (fighting for “civilization” against “barbarism”). The modern city, not as photogenic, is usually ignored. In re-presenting the exhibition, the Getty has taken some small steps to address Palmyra’s rich history over the last 1,700 years, not just its Roman-era past. But it still has a long way to go.