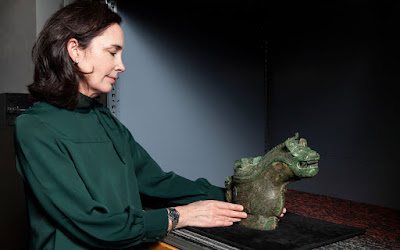 Specialist Margaret Gristina on a masterpiece of Chinese art: a lavishly decorated Shang-dynasty wine vessel in the form of a tiger and an owl, which comes to Christie’s on 18 March

Rituals were hugely important in China 3,000 years ago, when the Shang dynasty ruled over the middle and lower Yellow River valley: they were what brought society together. And often at the centre of those rituals were bronze vessels used for offerings of food or wine — a rare example of a wine vessel is to be offered at Christie’s in New York on 18 March.

‘This is one of the most extraordinary archaic bronzes I’ve ever handled,’ says Christie’s Chinese Works of Art specialist Margaret Gristina. ‘The quality of the craftsmanship is so intricate and sophisticated. It’s a type of lidded wine vessel known as a gong, which is among the rarest of all Shang-dynasty vessel shapes.’

The front of the gong  has been skilfully cast as a crouching tiger, ready to pounce. Its ferocious face forms one end of the lid. Experts think that the wine was served hot, so that steam would have poured out menacingly between the tiger’s fangs.

The opposite end of the gong  takes the form of an owl, with a rounded chest and complex, spiralling feather patterns detailed on its wings. Between the two animals, decorative dragons and other mythical beasts with beaks and rams’ horns are cast in low relief.

‘When I first saw the Luboshez gong, I was amazed by the animation of the animals’ faces, as well as the wonderful details of the tiger’s curled forelegs and springing hind legs,’ says Gristina. ‘The overall creativity and refinement are incredibly striking.’ 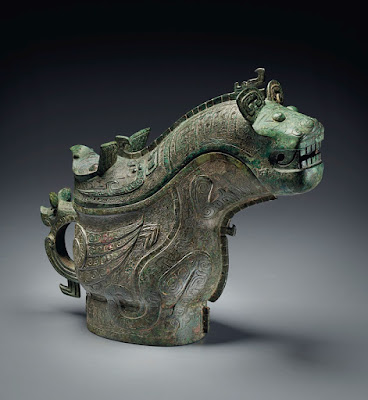 The exact intended use of the gong  remains unclear, but we do know that this form of vessel was produced in limited quantities and for a relatively short period, between the 13th and 11th centuries BC. However, the Luboshez gong can be dated a bit more precisely thanks to some academic detective work.

It belongs to a group of six known gong  vessels that are nearly identical: one is in the Harvard Art Museum; two are in Japan; and two, found in the tomb of Lady Fu Hao in Anyang, Henan Province, in 1976, are in China.

A principal wife of the Shang dynasty king Wu Ding, Lady Fu Hao was a powerful military leader, a priestess and mother to a prince. In her tomb, archaeologists discovered that she had been buried along with 2,000 objects to serve her every need in the afterlife — jades, bells, mirrors, shell currency and 468 ritual bronzes, including the two gong.

‘The fact that Lady Fu Hao’s pair of gong  are inscribed with her name leads us to believe that they were made around the time of her death, circa 1200 BC,’ explains Gristina. ‘The similarities between those two examples and the Luboshez gong  would suggest that they were made in the same region, around the same time, and perhaps by the same craftsmen.’

More can be deduced about the mysterious commissioner of the Luboshez gong. In its interior is a small inscription, possibly a clan sign, of four footprints around what has been interpreted as two hands holding an album or book. Efforts to identify the patron associated with these markings have so far proved fruitless, but the same pictogram can be seen on another bronze vessel type, known as a you, in the Musée Cernuschi in Paris.

‘This suggests that our wealthy and important owner once had a large set of bronze vessel shapes,’ says the specialist.

The production of bronze gong  vessels declined around the middle of the 11th century BC, when the Shang (1600-1046 BC) fell to the neighbouring Zhou dynasty (1046-771 BC). The new Zhou rulers claimed that the Shang’s taste for wine was decadent and not in keeping with the proper observance of sacred rituals. The ancestral spirits, they said, were more interested in sober offerings such as rice and grain.

n more modern times, archaic bronzes have been highly prized and sought after in China. Between 1749 and 1755, the Qing emperor Qianlong, one of China’s greatest art collectors, commissioned the Xiqing Gujian, a 40-volume catalogue of the 1,529 Chinese ritual bronzes in the imperial collection.

The Luboshez gong  is named after another esteemed collector, Captain S.N. Ferris Luboshez (1896-1984). At the outset of the Second World War, Luboshez — a lawyer and trained scientist — joined the US Navy and was eventually posted to Shanghai. There he developed a taste for Chinese art and purchased the gong  at some point before 1949.

‘He was a rare breed of collector: an astute connoisseur invited into the inner circles of Chinese collectors and scholars, who at the time did not always welcome foreigners,’ says Gristina.