FRANCE BIDS ‘ADIEU’ TO MERKEL, AWARDS HER LEGION OF HONOR

BEAUNE, France (AP) — German Chancellor Angela Merkel was feted by France on Wednesday in a special farewell ceremony honoring her leadership and partnership.

French President Emmanuel Macron was to award Merkel with the Great Cross of the Legion of Honor as part of her “adieu” visit to the historic Burgundy town of Beaune. 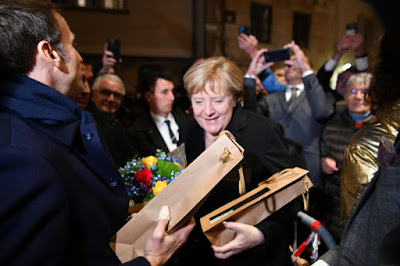 Macron and his wife Brigitte joined Merkel and her husband Joachim Sauer for a visit to the Hospices de Beaune, a medieval hospital that is now a monument renowned for its museum and surrounding vineyards, and for a piano recital at the Vougeot Chateau.

The event is also seen as a gesture of friendship between France and Germany, long-time foes whose partnership is at the heart of the European Union.

Macron is the fourth French president to hold office since Merkel took power in 2005.

Merkel is leaving office after 16 years in power. The three parties that hope to form Germany’s new government say they aim to have the country’s next chancellor in place in early December.