A musician bravely descends to the Underworld, determined to rescue his beloved from the clutches of death through a mixture of daring and art: The ancient myth of Orpheus and Eurydice has struck a primal chord in human hearts and minds for thousands of years, and has particularly resonated with composers of opera—itself an attempt to achieve the impossible through art—since the genre’s earliest days. Now, American composer Matthew Aucoin adds to the tradition with Eurydice, a brilliant contemporary retelling based on Sarah Ruhl’s acclaimed play, which reimagines the myth from Eurydice’s point of view. This season at the Met, Music Director Yannick Nézet-Séguin takes the podium to conduct the powerful new opera in an immersive staging by Mary Zimmerman, with radiant soprano Erin Morley singing the title role. By William Berger 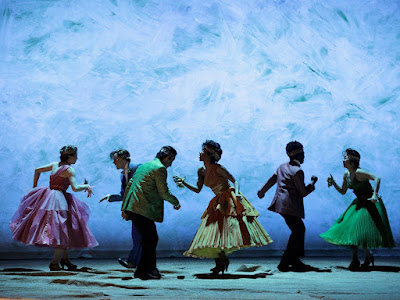 The myth of Orpheus and Eurydice has captivated imaginations for millennia. Orpheus, the archetypical musician, marries Eurydice, who then dies (from a snake bite, in most versions) on their wedding day. Orpheus mourns so movingly that the gods allow him to descend into the Underworld and lead the shade of Eurydice back to the world of the living. There is—as so often in myth— one catch: Orpheus must not speak to Eurydice, or even look back at her, until they have completely emerged from the Underworld, or else he will lose her forever. Of course, he can’t resist the urge to see his beloved and make sure she’s following, so he turns to look, and she is taken from him forever (although there are countless variations).

Matthew Aucoin’s acutely fresh and new operatic take on the myth, which premieres on November 23, is simply titled Eurydice. According to playwright Sarah Ruhl, who wrote the source play (2003) as well as the libretto for the opera, this is significant. She says she had long been fascinated by Orpheus and Eurydice, but wondered how the myth would change if Eurydice had more agency and was a more active participant in the story. “I imagine Eurydice saying his name and startling him, and causing him to turn,” she says, by way of example. This season, one of today’s most brilliant sopranos will sing this newly independent Eurydice: Erin Morley, familiar to Met audiences from previous star turns as Sophie in Der Rosenkavalier and Olympia in Les Contes d’Hoffmann, among many other roles, as well as a show-stealing performance in the live-streamed At-Home Gala. 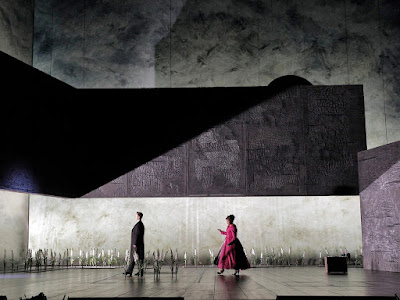 “I also was really interested in a kind of dialectic between language and music,” Ruhl continues. “I thought, what if Eurydice were language and Orpheus were music?” It’s an intriguing prospect that suggests one way this story lies at the heart of opera as an art form: the depth of love between word and music, but also the turbulence of their relationship.

This parallel between the Orpheus myth and opera points toward a connection that has existed for hundreds of years, right back to the invention of the operatic form. The earliest extant complete opera we have today is Jacopo Peri’s Euridice (1600), the second earliest is also a Euridice by rival composer Giulio Caccini (1602), and the oldest opera that is still performed with any regularity is Monteverdi’s L’Orfeo (1607). Why are these unlucky lovers so irresistible, especially to creators of opera?

Aucoin thinks it has to do with the relatability of the myth. “We’ve all been Orpheus at the moment of the backward look,” he says. “It’s the act of doing the thing that you know will hurt you, that you know will be bad for you, and yet you do it. You do it with the full knowledge of its disastrousness. I think that’s something really primal.” The cultural persistence of certain myths is almost always because of this ability to transcend the divide between fiction and truth, Aucoin says. “There’s really no question of whether they actually happened because they are always happening. They’re happening inside of us.”

Orpheus’s experience, then, encapsulates something primal in all of us, and versions of the myth reappear throughout the arts, in painting and literature, film (e.g., Marcel Camus’s celebrated Black Orpheus, 1959), Broadway (e.g., Hadestown), and elsewhere. But opera has a special relationship to this story, from dozens of Baroque settings to Gluck’s Orfeo ed Euridice to Jacques Offenbach’s Orphée aux Enfers (1858) to Philip Glass’s Orphée (1993), among many others. If we extend the meaning of the myth beyond the specific characters and into metaphorical retellings of a man on a quest to rescue a woman from some sort of underworld (Mozart’s Die Zauberflöte and Verdi’s La Traviata come instantly to mind), we can discern the myth in many more operas and even, in some broad sense, perhaps in all operas. “The Orpheus story is music’s foundational self-glorification,” as Aucoin puts it. “But it’s also pretty brutal about human nature. It says that music can conquer death—but that we are not worthy of it. Human beings are always going to screw it up.”

One new aspect of this retelling of the myth is that, when Eurydice arrives in the Underworld, she finds her father—sung in the Met’s production by bass-baritone Nathan Berg. Father and daughter discuss the cycles of life and loss inherent in the myth. “My father, who I was really close to, died when I was 20,” Ruhl says. “And I think I just wanted to have more conversations with him. I thought that if Eurydice were in the Underworld, it stands to reason that she would meet an ancestor.” In Ruhl’s version of the story, part of the effect of Eurydice’s death is that she entirely loses her memory. In the Underworld, her father helps her to relearn her identity and recover her life experiences. “I think that’s really the emotional kernel of why I wrote the play,” Ruhl says…………….