RETURN OF PARTHENON MARBLES TO GREECE IS UP TO BRITISH MUSEUM, UK OFFICIAL SAYS. BRITISH-MUSEUM

In a meeting in London, the Greek Prime Minister reiterated an offer to loan other artworks to the British institution in exchange for the priceless marbles. 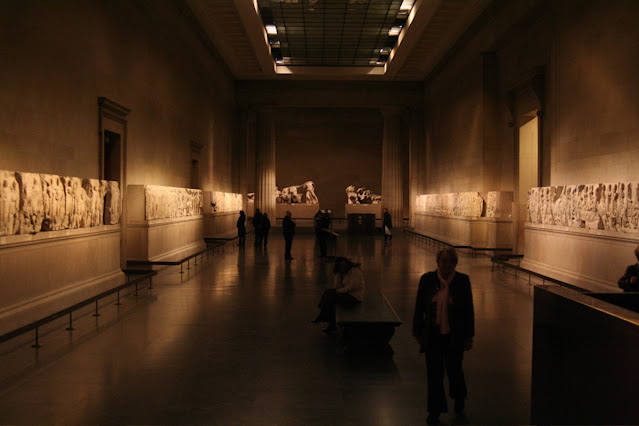 The Duveen Gallery at the British Museum, where the Parthenon Marbles are displayed. (photo by Nic McPhee via Wikimedia Commons)

Visitors admiring the Parthenon Frieze at the Acropolis Museum in Athens may notice plaster casts on view in place of the marble originals that once wrapped around the ancient Greek temple. Many of the high reliefs depicting the procession of the Panathenaic festival have been destroyed in the 2,500 years since the monument’s construction. But the majority of surviving Parthenon marbles outside of Athens, including not only 250 feet of frieze fragments but sculpted relief panels and pediment statuary, resides in the collection of the British Museum in London.

Known as the Elgin Marbles after the British official who had them removed from the ruins of the Parthenon when Athens was under Ottoman rule in the early 19th century, the coveted sculptures have long been the subject of heated debate between the UK and Greece. The country has repeatedly called for the permanent return of all the Parthenon pieces in the British Museum’s collection, presenting a formal request for their return in 1983 — the first of many fruitless attempts in recent decades. Last March, Prime Minister Boris Johnson reasserted the UK government’s long-held position that the marbles were “legally acquired” and “have been legally owned by the British Museum’s trustees since their acquisition,” firmly denying the possibility of their return.

But that stance may now be changing. Today, in advance of a scheduled meeting with Greek Prime Minister Kyriakos Mitsotakis in London, a spokesperson for Johnson said that “the possession of the marbles is a matter purely for the museum” and “not one for the UK government.”

“The British Museum operates independently of the government. It is free, rightly, from political interference,” the spokesperson told the Guardian. “Any decisions relating to the collections are taken by the museum’s trustees, and any question about the location for the Parthenon sculptures is a matter for them.”

In an interview last weekend, Mitsotakis argued his case for the artworks’ return, reiterating an offer he made in 2019 to loan artworks to the British institution in exchange for the priceless marbles.

“Our position is very clear,” Mitsotakis told the Daily Telegraph. “The marbles were stolen in the 19th century; they belong in the Acropolis Museum and we need to discuss this issue in earnest.”

He continued, “I am sure that if there was a willingness on the part of the government to move we could find an arrangement with the British Museum in terms of us sending abroad cultural treasures on loan, which have never left the country.”

The UK official’s comments today appear to defer the question of repatriation to an institution that has held on to the sculptures just as fervently as the national government. In response to Hyperallergic’s request for comment, a British Museum representative said that its trustees “firmly believe that there’s a positive advantage and public benefit in having the sculptures divided between two great museums.”

“The Acropolis Museum allows the Parthenon sculptures that are in Athens (about half of what survives from the ancient world) to be appreciated against the backdrop of Athenian history,” the representative told Hyperallergic. “The Parthenon sculptures in London are an important representation of ancient Athenian civilisation in the context of world history. Each year millions of visitors, free of charge, admire the artistry of the sculptures and gain insight into how ancient Greece influenced — and was influenced by — the other civilisations that it encountered.”

In 2019, British Museum Director Hartwig Fischer drew ire when he expressed a similar view, arguing that the removal of the Parthenon marbles from Athens in the 19th century was a “creative act.”

While the institution defends its possession of the pieces, the Parthenon sculptures are listed in a dedicated section on its website titled “Contested objects from the collection.” Also included in this category are the museum’s approximately 900 Benin bronzes, looted by British troops from Nigeria in 1890, and the so-called Maqdala treasures, plundered in Abyssinia two decades earlier.

Last month, UNESCO’s Intergovernmental Commission for the Return of Cultural Property to Countries of Origin issued a recommendation urging the British government to “reconsider its position and to negotiate with Greece” on the sculptures’ return. But for Elizabeth Marlowe, an associate professor of ancient and medieval art and museum studies at Colgate University, it is unethical to prioritize the return of the Elgin marbles while the Benin and Maqdala objects, and other spoils of colonial violence, remain in the collection.

“The retention of the Parthenon sculptures in London is a wrong done by one self-proclaimed inheritor of the classical tradition to another self-proclaimed inheritor of the classical tradition, an act of interfamilial bullying,” Marlowe wrote in an op-ed for Hyperallergic. Such cases of restitution always “attract the most sympathy” and “get righted most quickly,” she adds, citing the return of Napoleon’s loot to European countries and the Washington Principles on Nazi-confiscated art.

In a 2016 episode of John Oliver’s talk show Last Week Tonight, the British comedian tackled the subject of the contentious sculptures with a cheeky line that has since become a popular meme.

“All our greatest possessions are stolen. Tea? Stolen. The Elgin marbles? Let’s say permanently borrowed,” Oliver said. “The entire British Museum is basically an active crime scene. If we start giving back everything we took from the empire, that building will basically be completely empty except for one portrait of Lord Alfred Tennyson and a pair of Gary Oldman’s old running shorts.”