To the Shah of Iran, these gold reliefs of mythical beasts represented the pinnacle of Persian culture. To the scholar Arthur Upham Pope, they ranked among the greatest artworks in history. Specialist Chanel Clarke sheds light on their 2,500-year history 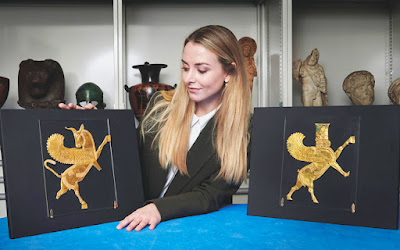 In the summer of 1963, His Majesty Mohammad Reza Shah Pahlavi, the Shah of Imperial Iran, penned an article for the international edition of Life  magazine, which celebrated his nation’s ‘glorious past’ and ‘shining future’.

He wrote how, under his command, the ‘cradle of civilisation’ was being restored, and noted that Iran’s ‘illustrious rulers laid the foundations of the Persian Empire, destined to live on as the oldest monarchy of the world’.

Sixteen years after the article was published, a revolution brought his reign to an end.

The Shah could not have predicted his nations’s future, but his claims about its past were backed by 2,500 years of art history. His text was preceded by nine pages of photographs of the ancient palaces of Persepolis, the shimmering turquoise mosques of Isfahan and the ornamental gardens of Shiraz.

From this plethora of riches, however, the Shah selected an artwork on a much smaller scale for the magazine’s front cover: a gold relief of a winged bull, just over 24 cm high, dating back to Iran’s Achaemenid empire (550-330 BC).

On 8 December the bull and a gold lamassu — a half man, half hooved-and-winged Persian beast — are being offered in the Antiquities sale in London.

The two extraordinary objects were reputedly discovered during an excavation at the city of Hamadan, in northwest Iran, in 1920.

The site had been known as a rich source of finds since the end of the 19th century. Previous digs, led by the French scholar Charles Fossey, had unearthed Achaemenid citadel towers, column bases decorated with arabesques, faience tiles and the sculpted head of a prince.

Yet the most dazzling discovery by far was a trove of 23 gold items — among them the two plaques coming to auction — that also included statues of goats and camels, items of jewellery, and two tablets with inscriptions dating the hoard to the reign of King Artaxerxes II (404-359 BC). 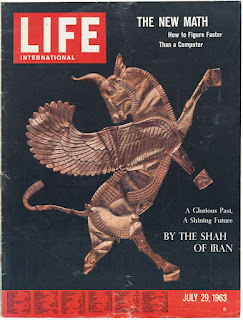 Artaxerxes II was a powerful leader who successfully defended the largest empire the ancient world had ever seen — stretching from Greece to India — against his brother, Cyrus the Younger, and his army of Greek mercenaries known as ‘The Ten Thousand’. He also waged successful campaigns against the Spartans, Athenians and Egyptians.

Much of the king’s wealth was lavished on building projects, including the restoration of the palace of his forebear, Darius I, at Susa, a new hall at Hamadan and his own tomb at Persepolis.

Greek and Roman historians described how Achaemenid buildings were covered in spectacular amounts of gold. Persepolis alone is said to have contained 2,500 tonnes of it. Herodotus wrote that Achaemenid soldiers ‘glittered all over with gold, vast quantities of which they wore about their person’.

Gold plaques such as this pair add credibility to these accounts, says Christie’s Ancient Art and Antiquities specialist Chanel Clarke.

‘Stone carvings show Achaemenid kings with similar appliqués pinned to their cloaks,’ she says. ‘These two are too large and heavy for that. Instead, the small tongues at the ends of the animals’ hooves suggest they slotted into grooves on furniture — maybe a chest, a door or even a throne.’..............