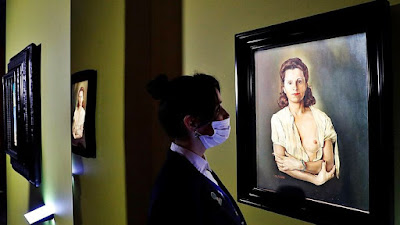 The exhibition features a unique selection of Dalí’s paintings and drawings representing his wife and muse Gala. Most of them come from the artist’s own collection – he considered them so valuable that he wanted to keep them and to exhibit permanently in his Theatre-Museum in Figueres. Dalí admired Gala and throughout his career as a painter had created a vast mythology apotheosizing her as his personal Daemon. Her many disguises – Leda and Helen, Gradiva and Galarina – refer to the well-known Ancient and classical European narratives and at the same time reflect Dalí’s personal artistic metamorphosis.

The central artwork at the exhibition – Leda Atomica – had been created by Dalí in 1947-49, and is rightly considered to be one of his most important (or even the most important) paintings ever. It represents Gala as Spartan queen Leda who according to the myth was seduced by Zeus in the disguise of a Swan. The painting explicates the principles of Dalí’s «nuclear mysticism», while all important elements are suspended in the space without touching or mixing with each other. Leda Atomica is the landmark for Dali to realize he has reached his own path and can now teach young apprentice painters. He presents it to the audience as his very first masterwork, an ideal painting based on the rule of the Golden Section and Ancient geometry». Galarina (1945) is also a masterpiece, that has been never lent since Dali’s death. It represents a retrospective look at Raphael, the Master who is always present in Dali’s evolution. Here, Raphael shows Dali the way to Classicism. 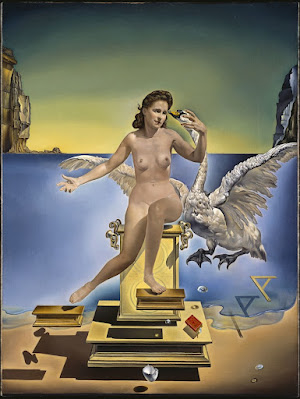 Gala has always been regarded as Salvador Dalí’s muse, an inspiring and mysterious woman, a clichéd adjective, but one that shows how little we know about her. Loved by some, loathed by others, she always caused a notable impact. She was a great intuitive woman who knew how to recognize and encourage the artistic and creative genius of artists such as Paul Éluard, Max Ernst, René Char, René Crevel or Salvador Dalí. Paul Éluard described her glance as ‘eyes piercing through walls’ and Salvador Dalí talked of her “medium-like intuition” or he declared that “she was the Angel of Equilibrium, the precursor of my classicism”.

In this exhibition we implicitly refer to an artist without an oeuvre, being an intellectual and a writer herself.