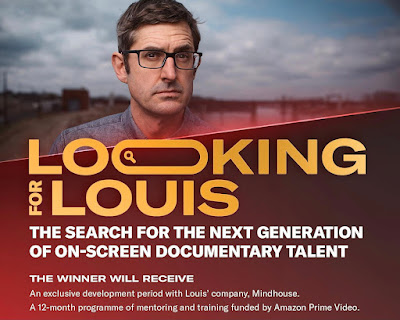 The Search for the Next Generation of On-Screen Documentary Talent

“I am very excited to be part of this initiative. For me, one of the best parts of launching Mindhouse is being involved behind the scenes with new talent who can tell fresh stories in different and exciting ways. To paraphrase Danny Glover in Lethal Weapon, I’m getting old for this shit, and my knees aren’t what they once were. We need to safeguard the future of irreverent and intelligent on-camera reporting by bringing up the next generation of presenters."

The TV Foundation (the umbrella charity of the Edinburgh TV Festival), is teaming up with internationally renowned journalist, documentary maker, broadcaster and author, Louis Theroux, to launch a new talent search to discover the next generation of on-screen documentary makers who want to follow in his investigative footsteps.

Looking For Louis will culminate in a must-see session at this year’s Festival where Theroux and his production company partners Nancy Strang and Arron Fellows will reveal the talented winner.

The search has been launched through Theroux’s production company, Mindhouse Productions, in partnership with The TV Foundation and Amazon Prime Video with support from The TriForce Creative Network.

Only one element marred the Louis Vuitton men’s show Tuesday, Nov. 30, at Miami Marine Stadium, a moment that unfortunately felt decidedly inappropriate to some guests — indeed, to employ the word used by one high-profile fashion editor, it veered into “offensive.” But more on that later.It’s not too big a leap to arrive at such an opinion, especially as Tuesday night’s focus was clear: to honor Virgil Abloh in a show produced less than 48 hours after the artistic director’s death Sunday, Nov. 28, from a rare form of cancer.
Publicado por alicia perris en 12:49