As part of its mission to collect, conserve, and promote understanding of the art of our time, the Guggenheim has long engaged experimental performance, dance, music, and theater, as well as related mediums such as film, video, and installation. These intertwined modes of aesthetic creation have played a pivotal role in the history of modern and contemporary art. From the early 20th-century European avant-gardes of Futurism, Dada, Surrealism, and the Bauhaus to the international movements of Fluxus, Happenings, and Conceptual art in the 1960s and ’70s, live and recorded work introduced experiential, social, and temporal strategies that radically reshaped notions of what art could be and how it related to the world. Today, performance is widely accepted as an essential aspect of art practice, and the issues it raises—regarding duration and ephemerality, the role of the document and the function of memory, the value of labor and the significance of personal interaction—remain as challenging and compelling as ever. 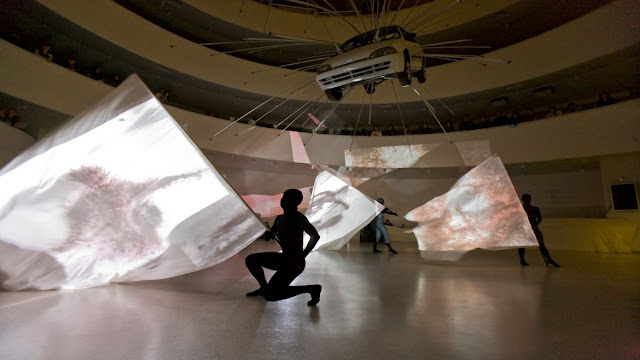 The Guggenheim’s commitment to performance and other time-based mediums dates back to the 1960s. As these forms of art achieved new levels of cultural prominence, the agora-like quality of the Frank Lloyd Wright–designed rotunda encouraged numerous artists to develop site-specific interventions in the form of one-time events or ongoing exhibitions. In 1969 the 26-year-old choreographer and singer Meredith Monk staged the now-legendary dance and music piece Juice, which found inspiration in the unique sight lines and acoustics of the architecture. Over the next ten years, other artists followed suit in taking advantage of the building’s peculiarities; when the museum hosted the First Intermedia Art Festival in 1980, Ping Chong, Joan Jonas, Nam June Paik and Charlotte Moorman, and Stan VanDerBeek, among others, created performances that collapsed conventional distinctions between music, new media, theater, and visual art. During the same era, the Guggenheim began to organize exhibitions highlighting artists whose work in painting or sculpture was deeply inflected by performance—notably a 1979 Joseph Beuys retrospective.

The Beuys presentation served as an important touchstone for the exhibition program in the 1990s and 2000s, when performance-based art flourished in Rebecca Horn: The Inferno-Paradiso Switch (1993); The Hugo Boss Prize (1996–97); Rrose is a Rrose is a Rrose: Gender Performance in Photography (1997); The Worlds of Nam June Paik (2000); and Matthew Barney: The CREMASTER Cycle (2003), among other shows. In November 2005, the museum mounted Marina Abramović: Seven Easy Pieces, a groundbreaking presentation of seven endurance performances, which established the Guggenheim as one of the leading proponents—and interrogators—of performance art’s institutionalization. The landmark Works & Process series (founded in 1984) also expanded its program, bringing dozens of leading performing artists, choreographers, composers, writers, and directors to the museum for intimate performances and public discussions, and often offering audiences a glimpse of productions well before their official premieres.

In recent years, live art has become increasingly central to the Guggenheim’s program, with nearly every major exhibition boasting at least one related performance. These projects may occupy the galleries over days or weeks; in 2010 the museum emptied the rotunda of objects for six weeks to present Tino Sehgal’s ephemeral, interactive artworks. The growing presence of live art in and around the building is coupled with the museum’s pioneering efforts to bring performance art into the collection, which began with the acquisition of Sehgal’s This Progress (2006) in 2010 and expand with each year. The dual process of maintaining and displaying these ephemeral, durational works embodies the Guggenheim’s ongoing mission to preserve and present the art of today.