From Sainte-Adresse to Giverny, Claude Monet’s tranquil, yet vibrant, garden scenes are instantly recognizable within the canon of Impressionism. Richard Thomson delves into these iconic pictures 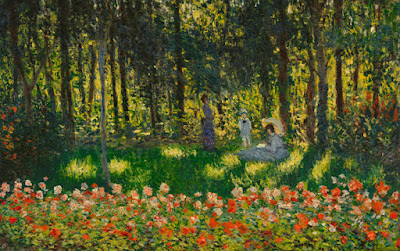 While the garden came to be one of the most beloved subjects within the Impressionist circle, Claude Monet’s idyllic outdoor scenes have emerged as some of the most iconic and easily recognizable garden pictures of the 19th and 20th centuries. Though he began exploring the motif as a young artist in his aunt and uncle’s manicured lawns, it was not until he moved to Argenteuil in 1871 that the subject became increasingly more important, culminating in the sweeping Nymphéas at the Musée de l'Orangerie that serve as both a celebration to the artist’s historic career and his legendary garden in Giverny.

Painted a year after the Parisian public was first introduced to the revolutionary plein-air aesthetic at the First Impressionist Exhibition of 1874, Monet’s Au Jardin, la famille de l’artiste (1875) depicts the artist’s family caught in a moment of suspended leisure. Last exhibited in 1919, the painting will be offered in Christie’s 20th Century Evening Sale this November in New York.

Below, Research Professor in the History of Art at the University of Edinburgh, Richard Thomson, introduces the fascinating history of Monet’s gardens and the proprietorial and creative inspiration that the artist drew from them.

The garden was a central theme in Claude Monet’s art. His life’s work culminated in the grandes décorations on the theme of his water-garden at Giverny, with their sweeping vistas of the water-lily pond and the sky reflected on their still surfaces. Installed in the Orangerie des Tuileries in May 1927 after his death the previous year, these serene canvases of his own garden were his gift to the state in the wake of the First World War, an old man’s fusion of the private and the national. But throughout Monet’s long career, the garden had encouraged his painterly gifts in the most varied ways.

Monet’s garden paintings can carry a strong suggestion of the proprietorial. As a young artist in the later 1860s, he painted his prosperous uncle and aunt’s manicured garden at their large property at Sainte-Adresse and depicted them among gladioli and geraniums on a terrace overlooking the entrance to the busy port of Le Havre (Terrasse à Sainte-Adresse, 1867, The Metropolitan Museum of Art, New York). In the following decade, the decorations he made for the wealthy Ernest Hoschedé feature the extensive gardens and turkeys on the lawns in front of the family’s mansion of Montgeron to the south of Paris (Les Dindons, 1877, Musée d’Orsay, Paris). By contrast, Monet was conscious of his then comparatively modest status. Painting his garden at Vétheuil in 1881 when his finances were very difficult, he four times painted a deceptive composition which suggests an expansive property, but he had inventively used a low viewpoint to exclude the main road between La Roche-Guyon and Mantes that separated the house from the garden……………….