As the acclaimed Netflix series has gone on, it appears in some ways to have bought into its own hype too much, and in doing so has weakened its critiques. 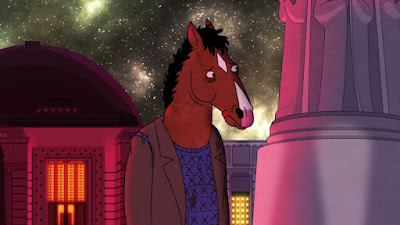 The last half of the final season of BoJack Horseman is nearly upon us. The only remaining TV series of the initial wave of Netflix originals from 2013/2014, it’s come a long way from the mixed critical reception it received for its first season. The show is now consistently lauded as one of the platform’s best, if not the best. The story of a washed-up, self-destructive Hollywood actor surrounded by an equally flawed circle of friends, its acclaim is all the more impressive given that it’s a cartoon in which half the characters (including the eponymous lead) are anthropomorphized animals. It’s been praised for its treatment of topics including depression, sexual harassment in show business, and aging.

But the show’s most intriguing theme has emerged from the overarching plot surrounding the main character. As BoJack has alternated between trying to claw his way to being a better person (so to speak) and backsliding into bad habits and worse behavior, the series has increasingly turned a critical eye toward the very premise of “redemption” and the underlying tropes of antihero television. This has grown naturally from the show’s penchant for metafictional humor, as well as its continual interrogation of the expectations pop culture sets for ideas of well-being and personal fulfillment. But as the series has gone on, it appears in some ways to have bought into its own hype too much, and in doing so has weakened this critique. 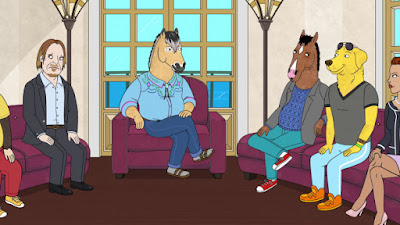 This is perhaps best demonstrated by the fifth season’s central storyline, which sees BoJack become the lead in a gritty prestige drama. In the process, it spoofs many crime show cliches of the contemporary “Golden Age” of television, primarily True Detective. Series like The Sopranos, The Wire, and Breaking Bad helped seed the blossoming of this modern era of “prestige TV,” or whatever you want to call it. BoJack Horseman righteously upbraids the more problematic elements of this genre, particularly its treatment of women. But there’s an odd hypocrisy at play here — though less a thematic than an aesthetic one.

Over the course of BoJack‘s run, half-hour shows have in some ways supplanted the traditional hour-long drama as the preeminent critical darlings (a trend BoJack has played no small role in driving). For all that it mocks about the self-seriousness of programs like True Detective, BoJack itself can be tremendously guilty of the same thing. Though seldom will an episode go by without a healthy number of gags, the show has increasingly leaned into its reputation for devastation.

This wouldn’t necessarily be an issue if the show had finessed such moments. Sometimes the writers pull it off, and incredibly well. Several Season 4 episodes dealing with BoJack’s mother and her dementia represent what I consider the best of the series. But they can just as often land as maudlin, self-pitying, or disastrously misaimed. The most glaring example of this is a Season 5 episode that attempted to mitigate some of the criticism the show faced for having white actress Alison Brie voice Diane Nguyen, a character of Vietnamese descent. In it, Diane goes on a would-be journey of self-discovery in Vietnam. The optics of having a white woman’s voice muse on intensely specific anxieties of Asian American identity were either not considered or disregarded.

More broadly, from its very start BoJack has too often couched its exploration of its issues in obvious therapy-type dialogue, heavy on capital-M Meaningful speeches. It’s the kind of writing that’s ideal for putting on shareable image macros, but that projects more depth and insight than it actually possesses. It’s in line with the rest of the show’s fuck-the-fourth-wall style, but that style usually proves better for laughs than pathos.

The show can also fumble in its handling of the worst of BoJack’s bad behavior, which often forms the crux of major plot points. This has become especially glaring as the cliffhanger ending the first half of this season set up the public exposure of a few of his worst moments, suggesting an imminent reckoning for the character. One of the strangest of these lingering regrets for BoJack is how his onetime director, Kelsey Jannings, was fired from the film they were working on after they defied the producers to go on a wacky misadventure too complicated to explain succinctly. Watching such an absurd concept result in several season’s worth of serious emotional repercussions is odd, to say the least. 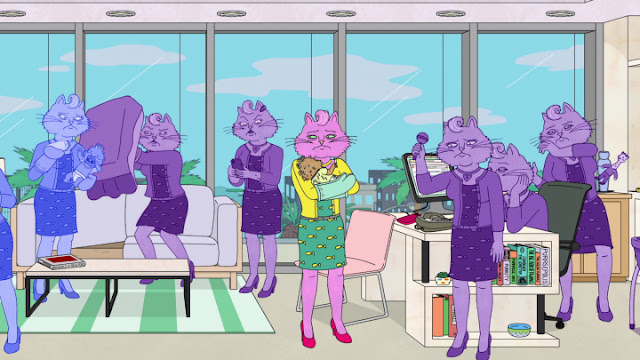 Also, unlike some of the shows it has mocked — which have no qualms about simply presenting their protagonists doing terrible things (though whether they properly unpack such actions varies) — BoJack tends to bring BoJack to his worst actions through strange, roundabout methods. For all his self-critical talk of being a “piece of shit,” it uses convoluted plot mechanics, like giving him a painkiller addiction that somehow produces hallucinations to make him briefly strangle a costar.

The show’s empathy for its characters is one of its greatest appeals. It helps the average viewer identify, since BoJack’s anxieties hew closer to those of many average people than those of older-style prestige TV gangsters. But in this realm, that approach seems to have held the show back in its scrutiny of fallen behavior; it’ll give us pause over BoJack, but never take him too far for a viewer to stomach. Given that the antihero age arguably took off with Tony Soprano pitilessly strangling a man in defiance of the growth we expected of him, BoJack‘s approach is actually something of a step back in terms of trusting an audience.

I’ve faithfully followed BoJack Horseman from its beginning, and have frequently found it quite funny and fitfully touching, but as time goes on I find it more difficult to fully embrace the show as a meaningful work. There are still eight episodes to go, so things may still wrap up in a satisfying manner, one both thematically and emotionally coherent. Yet I can’t help but fear we’re in for more speechifying and half-measures masquerading as significant events.
https://hyperallergic.com/538873/bojack-horseman-final-season/?utm_medium=email&utm_campaign=D013120&utm_content=D013120+CID_96a4b2cab1aaf0a55fcacb1ddd1f9b57&utm_source=HyperallergicNewsletter