Rick Barrett  Milwaukee Journal Sentinel
Somewhere between referencing the fight against injustice and recalling his late brother's plea for love, actor Joaquin Phoenix spent a chunk of his Academy Award acceptance speech talking about cows. Dairy cows, to be specific.

On Monday, dairy farmers pushed back.

"You should get out of Hollywood for a while," dairy farmer Carrie Mess from Lake Mills, Wisconsin, wrote on her blog. "The natural world isn’t there, it’s out here and it’s a beautiful day in the neighborhood."

Phoenix, who on Sunday night took home the best-actor award for his role in “Joker,” used his speech to rip on the dairy industry and the breeding of cows.

“I think that we’ve become very disconnected from the natural world and many of us, what we’re guilty of is an egocentric world view — the belief that we’re the center of the universe,” he said. 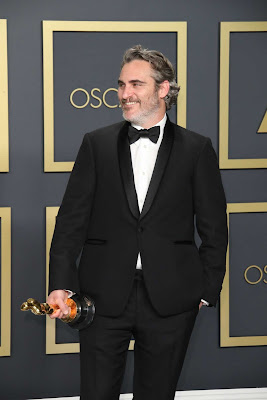 "We feel entitled to artificially inseminate a cow, and when she gives birth we steal her baby, even though her cries of anguish are unmistakable. And then we take her milk that’s intended for her calf and we put it in our coffee and our cereal.”

That didn't go over well with dairy farmers, who would have been happier if the actor had just jumped to the part where he acknowledged, "I have been a scoundrel."

A newborn calf is taken from its mother, about 20 minutes after birth, but it’s for the calf's own safety, Wisconsin dairy farmer Tina Hinchley told the Milwaukee Journal Sentinel, part of the USA TODAY network.

“If that mom had manure on her, we would risk that calf, our best genetics on the farm, getting contaminated with salmonella, E. coli or listeria, along with tetanus and all the other stuff that hangs out on the farm as well,” Hinchley said.

Instead, the calf is given colostrum from its mother, and is then bottle fed with a milk-replacement formula.

“Milk replacer is the best baby formula you can get. It’s powdered milk with all the vitamins and nutrients that a calf needs,” Hinchley said.

As for the "cries of anguish," Hinchley said: “She’s going to moo for that calf a little bit, but she’s not charging at us or anything. It’s almost like ‘Woo hoo, the babysitter is here. Now I can go eat.' And that is what she needs to do.”

For thousands of years, cows have been bred to produce milk for people.

“Today’s modern dairy cow isn’t all that maternal,” Mess said. “Occasionally we will have a cow that shows a little more maternal instinct, but it’s pretty rare.”

Mess has a blog called Dairy Carrie, stemming from her experiences as a farmer. Monday, on her blog, she wrote an open letter to Phoenix — and took a shot at the actor's supposed connection to the "natural world."

Part of it says: "Joaquin, you don’t need to drink milk. You don’t need to use or consume animal products. I respect your beliefs. But understand that there is no one more connected to the natural world than the farmers who are out here in the places you’ve never heard of, caring for the land and the animals. We’ve been sustainable and green since long before it was cool." 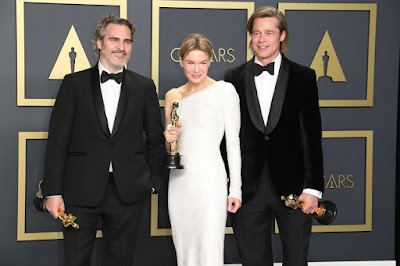 Phoenix has spoken out against the wool industry as being cruel to sheep.

To protest fishing, “He’s ‘drowned’ to show how fish typically suffer in their last moments of life,” the group People for the Ethical Treatment of Animals says on its website. A vegan since he was a child, Phoenix was PETA’s 2019 Person of the Year.

Nielsen estimates 23.6 million people watched the Oscars, which makes dairy farmers cringe at the harm that Phoenix’s remarks could have as more consumers turn to soy milk, almond milk and other dairy alternatives.

'Shame on the academy': Luke Perry, others left out of Oscars' In Memoriam segment

“We have a free country, with freedom of expression, but we do wish that Joaquin Phoenix would talk with us, rather than at us, because if he did he would learn a lot about the commitment that dairy farmers have for animal welfare,” said Alan Bjerga, spokesman for the National Milk Producers Federation.

“This isn’t the first time he has made remarks like this, but it gets more prominence because it was in an Oscars speech,” Bjerga said.