WHAT ARE THE NEW YORK PUBLIC LIBRARY LIONS READING? THE GREAT GATSBY AND BELOVED

As part of its 125th anniversary celebrations, NYPL has outfitted the marble lions that flank its main branch entrance with their very own copies of two books chosen from librarians’ 125 favorite titles. 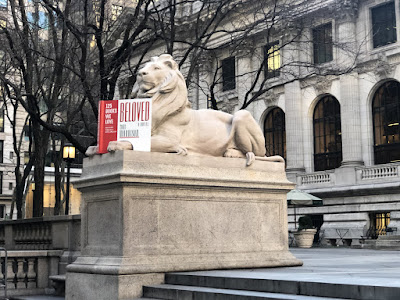 One of NYPL’s famous lions reading its own, lion-sized copy of Beloved by Toni Morrison (photo by the author)

The marble lions that flank the entrance to The New York Public Library (NYPL)’s majestic main branch in Manhattan are now doing more than stoically welcoming visitors and serving as climbing posts for over-active children. As of February 14, New York City’s most cherished stone felines are doing what one does at a library: reading books.
In celebration of its 125th anniversary, NYPL released a list of 125 titles for adults from the last 125 years developed by librarians across its three-borough system. Patience and Fortitude — the nicknames given to the lions by Mayor Fiorello LaGuardia in the 1930s to boost New Yorkers’ spirits during the Great Depression — have been given their very own copies of two titles from the list: The Great Gatsby by F. Scott Fitzgerald and Beloved by Toni Morrison (who was an NYPL trustee).
The addition is particularly exciting because NYPL’s mascots have not always enjoyed the luxury of accessorizing. In December 2013, Patience and Fortitude donned holiday wreaths for the first time since 2004, when a restoration discovered damages to the century-old marble likely caused by adornments. A time-lapse video provided by NYPL, below, shows how the lovable beasts were outfitted with the giant novels, complete with cut-out circles for their paws.
Personally, I would have liked to see Fitzgerald’s book retitled The Great CATsby, but I guess you can’t have it all.

According to an NYPL spokesperson, top 125 lists for kids and teen lists will come out later this year. In the meantime, adults will get the lion’s share.