Booksellers
Once a haven for modernist pioneers, the beautifully cluttered bookshop is now a legend, known for letting travellers stay the night– if they write an autobiography

Hannah Williams
Ernest Hemingway and three women, including Sylvia Joly (third from left), the director of Shakespeare and Company, in 1926. 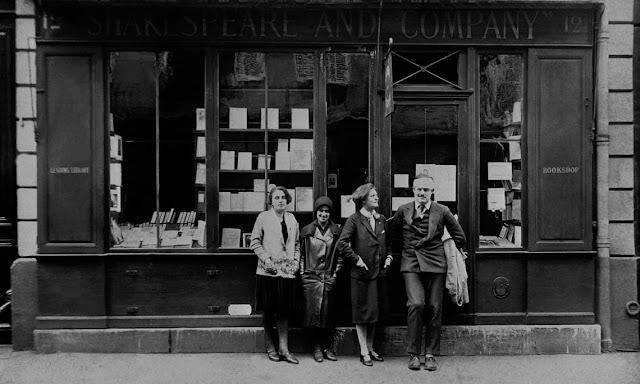 High-browsers … Ernest Hemingway and three women, including Sylvia Beach (third from left), director of Shakespeare and Company, outside the shop in 1926. Photograph: Coll Lausat/Keystone-France/Cam

There are currently 4,000 reviews of Shakespeare and Company on TripAdvisor. Many of them describe the shop as “magical” or “a dream”. Some mention its pedigree – the famous writers including F Scott Fitzgerald, James Joyce and Ernest Hemingway who went there, the films and TV programmes shot there. Even those that don’t rate the shop – who think the stock isn’t good enough or complain that it’s too crowded – recommend visiting, talking of its history and its proximity to Notre Dame. As a Paris landmark, which turns 100 this month, it is ranked below the Eiffel Tower and above the crumbling angels of Père-Lachaise cemetery. But how does a bookshop become a place of pilgrimage, a tourist trap and an emblem for a city, all at once?

There are no Shakespeare and Company equivalents in any other city. Britain’s capital has the London Review Bookshop, its tote bags beloved by fashionable kids in Seoul, but the clientele just want to visit a well-stocked bookshop. None of the bookshops in London are so deeply stitched into the mythos of the city that they have become part of any presumed sightseeing tour, alongside Big Ben, Westminster Abbey and Buckingham Palace. None have become an attraction for those otherwise uninterested in the literary landscape of their holiday destination. 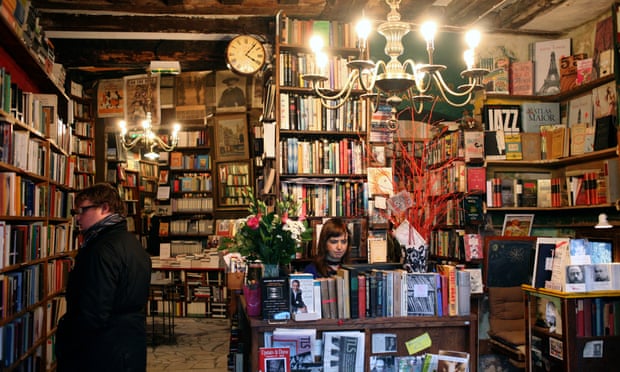 Print legends … inside the bookshop in 2009. Photograph: Eamonn McCabe/The Guardian

There’s the fact that the shop itself is beautiful: the dark wood, creaking like a ship, low-hanging absinthe-coloured lanterns giving off a dim, gold light. Its slight disorderliness – books stacked on the floor, wedged in too-small gaps on shelves, rested in the rungs of ladders – is undeniably attractive in a world where the majority of our novels are bought on the recommendation of an algorithm on a clean, white website. And its location is perfect too, allowing it to claim some of the long-dissipated bohemian charm left over by the artists and intellectuals of the old Rive Gauche, while being a quick walk from tourist favourites. And there is the much vaunted novelty that aspiring writers can stay in the shop for free; called “Tumbleweeds”, the travellers must help out with a few hours’ work, read a book a day and write a short autobiography.

But much of Shakespeare and Company’s tourist-drawing power comes from its glamorous history. The original shop was founded by Sylvia Beach, one of many American expats after the first world war drawn by the lure of Parisian life and the declining value of the franc. Beach’s life story is inextricable from that of Shakespeare and Company. She and her long-term partner, bookshop owner Adrienne Monnier, opened the shop in Paris in 1919. It was immediately frequented by the stars of the French literary scene, such as Valery Larbaud and Jules Romains. Ezra Pound soon followed. Then TS Eliot, Djuna Barnes, Fitzgerald (“one of our great pals”, Beach called him, musing on his “blue eyes and good looks”), Joyce, Hemingway.

The shop barely made a profit but no matter; this was a social movement, not merely a bookshop. Maybe it helps that the 1920s are the definitive time for literary salons in the public imagination: we see the names of modernists, we think of Gertrude Stein and Alice B Toklas, the Bloomsbury Group. Even their conversations are the stuff of legend; see Toklas calling Beach “flagstaff”, a chummy reference to the latter’s dedication to flying the flag of American literature.

In Beach’s salon-cum-shop, writers met editors met publishers, the young and the old, the esteemed and the low, all swirling in that dimly lit room by the Seine. There are pictures from around this time, black and white and heavy with shadow, where Beach stands outside the shop with Hemingway, the man who she’d introduced to the work of Turgenev, and DH Lawrence, an image of puff-chested masculinity. It’s at this point that the legend of Shakespeare and Company gains life; the residue of its patrons’ most brilliant ideas settling on the books like dust motes.

Ah, yes, it was Hemingway, more a giant than ever
Adrienne Monnier
Hemingway and Joyce are the stars of this fabled milieu. In addition to bookselling, Beach was a publisher. In 1922, she published Ulysses in English for the first time, printing 1,000 numbered copies on handmade paper. (Joyce sold Ulysses to a different publisher soon after, nearly bankrupting Beach, which only adds to the drama.) It was supposedly Beach’s refusal to sell her last copy of Finnegans Wake to a German soldier in Vichy France that led to her closing the shop – the soldier threatened to confiscate her books, which were hidden on the fourth floor. She comforted American soldiers being sheltered by the French resistance, hid Arthur Koestler in her attic from the Nazis, and was interned in a camp for her anti-fascist sentiments.

At the end of the war, Hemingway came back to Paris to see Beach. Monnier’s description of the scene reinforces the strange, fairytale quality of his association: “I saw little Sylvia down below, leaping into and lifted up by two Michelangelesque arms, her legs beating the air. Ah, yes, it was Hemingway, more a giant than ever.” There’s also the story, possibly apocryphal but impossible to resist, that Hemingway turned up to symbolically liberate the shop, before heading to the Ritz to drink to freedom.

Shakespeare and Company’s allure has been further gilded by the culture that grew around it. There’s Richard Linklater’s Before Sunset, set in a golden, swooningly romantic City of Light where the lovers find each other again during a reading at the shop. There’s also Woody Allen’s Midnight in Paris, a fan-fiction version of the 1920s literary scene where everyone is handsome and forever smoking. Beach’s own 1956 memoir – of course titled Shakespeare and Company – furthered the legend, with all the details about the readings, the authors and the champagne. The book is full of pictures, with slim, witty anecdotes about Beach’s litany of stars, their eccentric little ways, their gin-soaked extravagances. Chapters have titles such as “Fitzgerald, Chamson, and Prévost” and “Mr and Mrs Pound”. It’s an exercise in self-mythologisation, a door opened to a crowd eager to be invited in.