Organized by Free CUNY and the People’s Cultural Plan, protesters called to eliminate police presence in schools, subways, and museums. 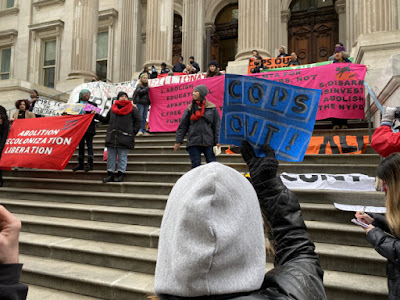 The protesters congregated outside the DOE’s offices on Chambers Street around 9am, where they were welcomed by a New York Police Department (NYPD) force of about 30 officers. “We’ve got to protect the pre-K school inside this building,” one of the officers told Hyperallergic.

The protesters held signs that read “COPS OUT!”, “FREE CUNY”, and “FREE MTA”, among others.

The building across the street houses the New York City Department of Cultural Affairs, which the protesters addressed as well.

Organized by the grassroots organizations Free CUNY and the People’s Cultural Plan (PCP), the event was held under the slogan “Students Speak Out: Cops out of our Schools and Subways!” The activists were joined by students from different high schools across the city, including those who staged the “Strike for Integration” last year.

“The People Cultural Plan finds this to be a cultural issue in our society,” Alicia Grullón, an artist and an organizer with PCP, told Hyperallergic. “Parents, educators, cultural workers, and students are being traumatized by the presence of police on campuses and in our schools, and even in our museums.”

Speaking to the crowd, Grullón said, “Our five demands are: to abolish educational apartheid; to free and fully fund CUNY; to make the MTA for New Yorkers, not the rich; no cops or military in our schools; we want to disarm, disinvest and abolish the NYPD.”
Alexandria James, a member of Free CUNY and an undergraduate student, added, “I’m here today because I want military recruitment off of CUNY campuses. I want armed security off of CUNY campuses.”

James, who is majoring in Philosophy and Africana studies at Brooklyn College, described feeling surveilled and policed both on campus and in the MTA system. “I don’t want to go to a school where I have to be surveilled, where my body is a moving target,” she said. “Free CUNY demands a cop-free school zone, a decolonized curriculum, and free education for us all.”

The New York City Department of Education still has not replied to Hyperallergic’s request for comment.
“Cultural workers and students are being traumatized by the presence of police on campuses and in our schools, and even in our museums,” said Alicia Grullón (front), an artist and an organizer with the People’s Cultural Plan.
The protest was held in solidarity with “#FTP3” (FTP stands for “Fuck the Police” or “Free the People”), the third in a series of citywide actions held by the group Decolonize This Place (DTP). The activist group, which in 2019 led protests against the Whitney Museum’s former vice-chair, Warren B. Kanders, has since shifted its focus to organizing actions against arrests of turnstile-jumpers and the harassing and policing of vendors and performers at NYC subway stations. They also advocate for free transport, among other demands.

DTP’s series of citywide actions comes in response to the Metropolitan Transportation Authority’s (MTA) vote to hire 500 new policemen, as well as a series of viral videos depicting police brutality on subways. At its last rally in November of 2019, in which hundreds took part, 58 of the protesters were arrested. In an Instagram post yesterday announcing their third action today, the group promised an escalation writing, “tomorrow, this city will be ours … FTP3/J31 will go down in history.”

Alicia Hu, a senior at NYC Lab School in Chelsea, told Hyperallergic at the protest that discriminatory policing is noticeable within her class. “We’re mostly a white school,” she said. “At the 14th Street subway station, everyone at my schools goes through the doors, they don’t pay. Policemen hold the door for them, but when a Black kid goes through the door, 20 cops are there. That’s not okay.” 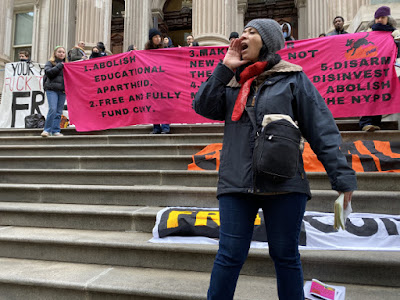 “Education is a right, not just for the rich and white,” protesters chanted.
Isabel Abbad-Munson, a student at Hunter College, added, “Police presence in the subway has gone way too far. Now it’s just everywhere. I know it’s supposed to make us feel safer but it does the opposite.”

Emma Gerard, a non-matriculated student at Hunter College, says she showed up at the protest to denounce the presence of military recruiters on campus. “I’m sick of them commodifying Black and brown bodies, making students think that their only way to make an income and have a chance at education is to go into the military,” she told Hyperallergic.

A DOE worker who declined to disclose her name was visibly agitated by the claims made by the protesters as she was on her way to work. “This is ridiculous,” she told Hyperallergic. “I’m not saying we have to increase police presence, but we shouldn’t decrease it either,” she continued. “If we don’t have discipline, we don’t have an education.”

When asked to respond to claims that students of color are affected most by policing at schools, the DOE worker said, “They suffer the most from lack of discipline. Schools have Safety Agents. If you decrease their number, there will be riots in schools.”

Last year, the American Civil Liberties Union (ACLU) released a report highlighting over-policing and lack of mental health support in schools across the nation, revealing that there were over 1,000 more police officers in NYC schools than there were guidance counselors and social workers in the year 2015-2016.

“When I see a police car, I just feel fear and anger,” said Jasmine, 9th-grader at Theodore Roosevelt High School in the Bronx.
Melody Moulton, a senior at Bronx High School of Science who belongs to the educational activist group Teens Take Charge, says New York City has the most segregated public high school system in the country.

“We want more guidance and college counselors: a one to 80 ratio at schools. And a real-world learning coordinator that ensures each student gets a paid internship every summer,” Moulton told Hyperallergic. “We also want shared courses, sports teams, and clubs, so students at under-resourced schools can take classes at schools in the same vicinity as theirs that might be able to offer those opportunities.”

As a final chord, the protester chanted, “Education is a right, not just for the rich and white.”

“Police are bad at their job, they don’t even help with crime,” said Jasmine, a 9th-grader at Theodore Roosevelt High School in the Bronx after the protest ended. “When I see a police car, I just feel fear and anger.”
https://hyperallergic.com/540230/nyc-high-school-and-college-students-demand-cops-out-of-schools/?utm_medium=email&utm_campaign=D020320&utm_content=D020320+CID_444cb40b8e9d08f222cafca9d79917d6&utm_source=HyperallergicNewsletter