The film star has been fascinated by the medium since he was young, and is selling more than 140 works by some of its greatest exponents 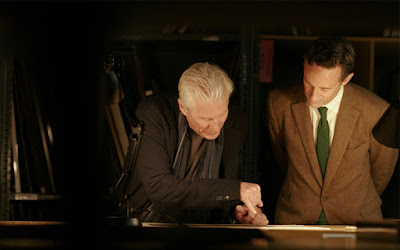 The actor Richard Gere is best known for his leading roles in romantic film dramas and comedies such as An Officer and a Gentleman (1982) and Pretty Woman (1990), which elevated him to international stardom. Now 72, it should perhaps come as no surprise that a man whose image has appeared countless times in the media over the past four decades also has an avid interest in photography.

On 23 March Christie’s New York will launch the online auction of more than 140 photographs from Gere’s collection. Featuring works by some of the greatest exponents of the medium — from early pioneers such as Alfred Stieglitz and Edward Weston to later giants Richard Avedon and Diane Arbus — the collection is remarkable for its breadth. Christie’s International Head of Photographs, Darius Himes, praises the collection for having ‘a level of aesthetic attunement and sophistication that you rarely see’, and yet Gere hesitates to call himself a collector, explaining his rationale in simple terms: ‘These are images that spoke to me.’

Gere’s passion for photography was sparked by a gift from his mother of a Kodak Brownie camera when he was a boy scout. ‘I remember taking pictures with that,’ he says, ‘I'm sure the quality was dodgy, but I remember starting to understand composition.’

His interest further developed when he made the transition from stage to screen in the mid-1970s. He saw first-hand the way a narrative could be built by using multiple camera angles — ‘each one of them telling a different story’. Gere describes his early days in New York and Los Angeles vividly, evoking the hours he spent in all-night bookshops browsing volumes about masters such as Irving Penn and Edward Curtis.

It was during this time that Gere became friends with the fashion photographer Herb Ritts, whose dramatic black-and-white pictures have become some of the best-known images of the young actor. ‘I knew him before he was a photographer,’ says Gere. ‘He was just kind of in the gang… and he'd take pictures of us.’

After meeting the more established Bruce Weber, Ritts soon became a leading name in the fashion scene, and Gere’s photographer of choice. ‘He was the only one I wanted to work with… So probably 80 or 90 per cent of the shots of me that ended up in magazines were by him.’ Gere also spent a lot of time with Ritts at shoots where he wasn’t the subject. He recalls his friend’s easy manner with models and how he ‘cared deeply’ about every image.

Gere further expanded his taste by visiting exhibitions wherever he travelled for work, and by going to auctions with Ritts. ‘It wasn't necessarily to buy,’ he explains, ‘it was like going to a museum. It was about seeing beautiful stuff.’ This became part of what Gere terms ‘an evolutionary process of training your eye and your own sensibilities’, which stood him in good stead when he began buying photographs seriously.

From the beginning he was captivated by the work of Diane Arbus, whose pictures of residents of a home for the developmentally disabled both disturbed and delighted him. The auction features several early works from Arbus’s career, including a haunting image taken in a Manhattan cinema, with the beam of the projector frozen like a ray of sunlight in a cathedral.

Gere was introduced to Arbus’s work by Elizabeth Avedon, daughter-in-law of the great fashion photographer Richard, whose two portraits of Bob Dylan appear in the sale. Gere played Billy the Kid in Todd Haynes’s 2007 film I’m Not There, in which six actors portray real or fictional characters who inspired Dylan’s songs or represent pivotal moments in his career. He describes Avedon’s Bob Dylan, Folk Singer, New York City (1965) as ‘one of my favourite photographs ever taken’.

He also acquired several pictures by Penn, choosing classic images from the photographers’ travels such as Bena Family, New Guinea (1970). This posed portable-studio portrait of five indigenous people from the Pacific island stands in stark contrast to his better-known Vogue fashion shoots. ‘He was very influenced by 19th-century photography,’ explains Gere, who has long admired the American photographer’s dedication to the formal qualities of his work, from the ‘soft north-face light’ he favoured to the complex printing processes behind every shot.

Gere’s collection also includes examples of early photography, including pictures by Edward S. Curtis (1868-1952) and Gustave Le Gray (1820-84). The actor takes obvious pleasure in relating how Le Gray’s magnificent Études de nuages clair-obscur (1856-57), a serene vision of clouds over a calm sea, belies its technical complexity. Measuring 16 x 20 inches (40 x 50 cm), the image was compiled from two negatives, he says, ‘The light metering is very different, top and bottom, so he took two shots, sometimes more than that. He used the horizon line as the division,’ marrying the two negatives in the darkroom.

Le Gray’s composite study is a rare landscape in Gere’s collection, which is dominated by people and glimpses of everyday life. Speaking about the works in the sale he describes Woman on Bus (1947) by Robert Frank in detail, interpreting the image’s ‘emotional and observational information’ in a way that attests to the decades he has spent in front of the camera himself. ‘Being an actor,’ he says, ‘my basic tool is emotions — storytelling. I think most of the pictures I respond to have a story.’

This could equally be said of the collection as a whole, which is a snapshot of how the great photographers made us see the world differently and draws us into Gere’s own remarkable story.