UKRAINE ACCUSES RUSSIA OF BURNING DOWN A MUSEUM. HYPERALLERGIC 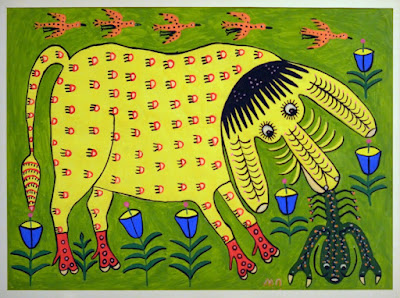 About 25 paintings by Ukrainian artist Maria Pryimachenko were destroyed in a fire at a museum near Kyiv, according to Ukrainian officials

About 25 paintings by Ukrainian artist Maria Pryimachenko were destroyed in a fire incited by an attack as part of the Russian invasion, Ukraine’s Ministry of Foreign Affairs said today, February 28, on Twitter. The works were housed at the Ivankiv Local History Museum in the Kyiv province.

A video circulating on Twitter shows what appears to be the museum’s building in flames. The destruction of the museum was also reported by the Kyiv Independent. Hyperallergic could not independently verify these reports.

Born to a peasant family in the village Bolotnya in the Kyiv region, Pryimachenko received no formal art education but learned embroidery from her mother in childhood. In early adulthood, Pryimachenko began to sell her embroideries at a market in Ivankiv, and her work caught the eye of another Kyivan artist, who encouraged her to work in the Central Experimental Workshop of the Kyiv Museum of Ukrainian Art.

From there, Pryimachenko took part in the First Republican Folk Art Exhibition in Kyiv in 1936, which later traveled to Moscow and Leningrad. By 1937, Prymachenko’s drawings were shown at the International Exhibition in Paris. Her work was exhibited around Ukraine, and in 1966 she won the Shevchenko National Prize of Ukraine.

Her drawings, paintings, and embroideries vividly depicted fanciful plants, animals, and beasts in a visual style evocative of dreams, parables, and myths. She worked with transparent watercolors and gouache on paper, translating shapes like bulbous flowers, fern-like leaves, peacock’s crests, and lion’s manes to a two-dimensional page while supplementing them with magical tactility.

“Numerous historical and architectural monuments and archaeological sites are under threat of artillery shelling and uncontrolled movement of heavy military trucks,” Vlada Litovchenko, director of the Vyshhorod Historical and Cultural Reserve, warned in a statement on Facebook that was translated into English. Attached to her post is a photo of the Ivankiv museum, several photos of the works by Pryimachenko that graced its walls, and a call for UNESCO to deprive Russia of its membership in the organization.