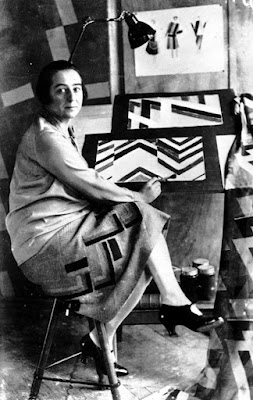 Colour, light, rhythm! Louisiana presents an international classic in the West Wing. Working across a variety of genres and media, Sonia Delaunay (1885-1979) was at the same time a painter, designer, and entrepreneur. She ranks among the most original and fascinating voices of modernism.

The exhibition is supported by Aage & Johanne Louis-Hansens Fond.

When Sonia Delaunay entered a Parisian dance hall in 1913 wearing a collage-like dress that resembled a colorful, cubist painting, it was a statement that attracted attention. It made an impression in the avant-garde environment of the time. Here, the visual art came strolling out of the painting’s frame and directly into the modern, dynamic everyday life.

Right there Delaunay manifested her artistic program and trademark: it was not just about modernizing the visual arts but the culture in a much broader sense.

Sonia Delaunay was among the pioneers in developing and disseminating abstract art in the 1910s. She swung freely between isms and roles across the boundary between “art” and “craft", her practice spanning painting, textile design, clothing, costumes, advertising, and book design. Always with powerful colors and color contrasts as a central element.

Delaunay often engaged in experimental collaborations with leading colleagues from other art fields. She was a forerunner of trends in the avant-garde movement of the 20th century, but the work also points to today’s multimedia practices in the field of visual arts and design. 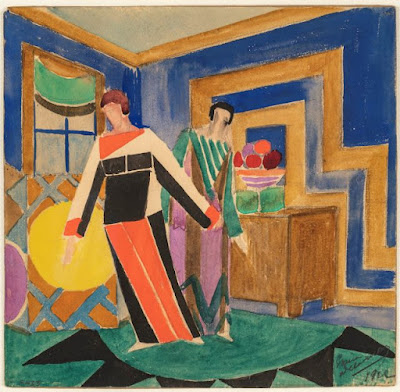 “I love creation more than life, and I must express myself before disappearing.

The exhibition spans the artist's production from the 1910s until the 1970s and introduces the large range of Sonia Delaunay's project and her various use of media. The exhibition is the largest exhibition hitherto in Scandinavia and the first solo presentation in the region in 15 years since an exhibition at Skissernas Museum – Museum of Artistic Process and Public Art in 2007.

A special section in the exhibition focuses on Delaunay’s textile designs and her 30-year partnership with the prestigious Dutch department store Metz & Co in Amsterdam. From painted sketches to finished fabrics, we see the wide range of her work, which totalled 200 designs.

Designs for theatre costumes are showcased, as well. The artist created costumes and “poem-dresses” in collaboration with Tristan Tzara, a central figure in the Dada movement who became a close friend. The exhibition also takes a look at Delaunay’s avid engagement in, and connections to, the avant-garde poetry of her day. She saw a close link between visual and verbal abstraction. 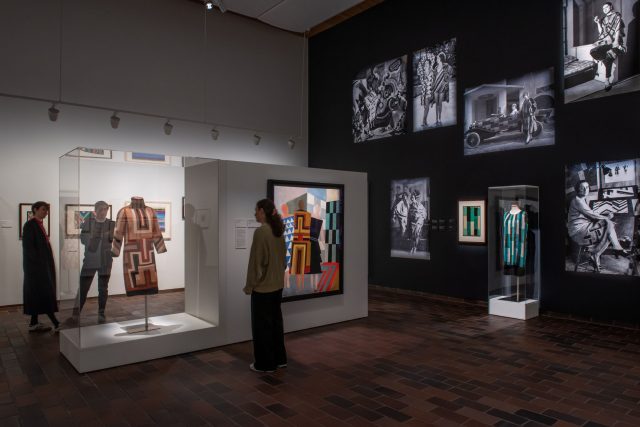 Sonia Delaunay was born into a Jewish family in Odessa, Russia (now Ukraine), as Sara Élievna Stern. Her parents gave her up for adoption to her mother’s well-off brother, Henri Terk, in St. Petersburg. She spent her childhood immersed in art and art books, took lessons in French, German and English, and went on European vacations with her family.

At age 18, she moved to Karlsruhe, Germany, to attend art school. A few years later, she went on to Paris to continue her education surrounded by the latest trends in the world centre of modern art.

Delaunay briefly explored figurative painting, but above all she cultivated colour in abstract compositions, in painting and design, from 1911 and up to her death in 1979, at age 94.

In 1910, Sonia Terk married Robert Delaunay (1885-1941), a painter her age. The two artists worked closely together in an ongoing exchange of artistic ideas until Robert’s untimely death in 1941. The couple’s home in Paris was a meeting place for avant-garde artists and writers, both before and after World War I.

Sonia and Robert worked closely together to develop a visual vocabulary based on rhythmic compositions of coloured planes – a colourful take on Cubism that they termed ‘Simultané’. The term was inspired mainly by the theory of “simultaneous contrasts”, a theory that colours affect one another and change character when placed side by side and experienced simultaneously.