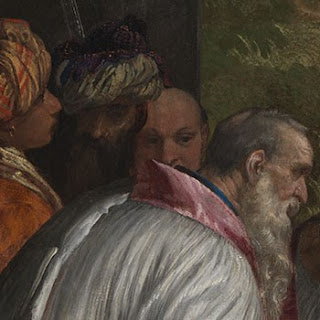 Many of the paintings you see on our walls would have originally hung in spaces that are very different to the gallery setting you see today. Paolo Veronese’s ‘The Consecration of Saint Nicholas’ was commissioned in 1561 as an altarpiece to hang in the church of San Benedetto al Po, near Mantua, Italy.

Through the use of virtual reality, you are invited to see what this painting would have looked like in its original setting and discover the story of its creation.

When you put on the headset, you will find yourself inside a digital reconstruction of the church of San Benedetto al Po. Your guide in this virtual world will either be Veronese’s patron and abbot of San Benedetto al Po, Andrea Asola; or Dr Rebecca Gill, our former Howard and Roberta Ahmanson Curator in Art and Religion, who researched the painting and its original setting. Both experiences will let you explore how the painting would have been seen in its original setting.

Commissioned by the National Gallery and StoryFutures

Art in a time of crisis

Paolo Veronese, 'The Consecration of Saint Nicholas' and the church of San Benedetto al Po

Once the climax of the Chapel of Saint Nicholas in the church of San Benedetto al Po, near Mantua in Italy, Paolo Veronese’s painting of ‘The Consecration of Saint Nicholas’ has been in our collection since 1826 - just a couple of years after the National Gallery’s foundation.

The painting was removed from its original location during the Napoleonic Wars and in 1811 it made its way onto the London art market, where it was purchased with the idea that it would hang on the walls of a future National Gallery. Thanks to the power of digital technology, we are now able to reunite, for the first time in over 200 years, ‘The Consecration of Saint Nicholas’ with the chapel for which it was originally made…………..