During the entire period of the exhibition, benefit from a reduced rate of €11 at the Centre Pompidou upon presentation of your Bourse de Commerce exhibition ticket. 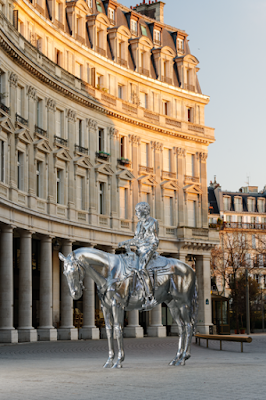 A major figure on the contemporary art scene, American sculptor Charles Ray (b. 1953) opens the cultural programme of 2022 , with an exhibition running until the spring. In collaboration with the artist, the Bourse de Commerce – Pinault Collection devotes an ambitious exhibition to the sculptor that opens on 16 February 2022

This carte blanche to the artist, the first of its kind in France and Europe in terms of its scale, is shared with the Centre Pompidou: two exhibitions are jointly presented, one in each museum, located a stone’s throw from each other. The corpus of Charles Ray’s work consists of some one hundred sculptures and bas-reliefs, and over a third of his sculpted work can be seen in Paris for the first time, with approximately twenty works at the Bourse de Commerce – Pinault Collection, and the equivalent at the Centre Pompidou. After the collective inaugural exhibition “Ouverture”, the Bourse de Commerce – Pinault Collection will transform its gallery spaces for this new event. The presentation will stretch from the forecourt to the Rotunda, and from the Salon to the galleries on the second floor, covering two-thirds of the total exhibition surface area. It will reveal an exceptional collection, including six previously unknown works, coming from the Pinault Collection and on loan from major international public and private collections. Two works from the Pinault Collection are on loan to the Centre Pompidou for the occasion.

This first major monographic exhibition presented at the Bourse de Commerce attests to the ability of the Pinault Collection to take risks and to commit to an artist by inviting them to invest a very large section of this new Museum. This choice also demonstrates the strong relationship that has existed for over twenty years between the collector and the artist, and the importance that the latter occupies in the Collection: seven works presented in eleven exhibitions since 2006, some of which have acquired an iconic dimension, like Boy with frog, commissioned by François Pinault for the opening of the Punta della Dogana. The work was exhibited at the tip of the Grand Canal in Venice. This exhibition also follows in the footsteps of several major monographic exhibitions, cartes blanches and retrospectives in Venice, dedicated to some of the key figures of contemporary art by the Pinault Collection. These include artists like Marlene Dumas (2022), Bruce Nauman (2021), Henri Cartier Bresson (2020), Luc Tuymans (2019), Albert Oehlen (2018), Damien Hirst (2017), Sigmar Polke (2016), Danh Vo (2015), Martial Raysse (2015), Irving Penn (2014), Rudolf Stingel (2013) and Urs Fischer (2012).

Between formalism and a reflection on representation and on the individual, Charles Ray plays with the notion of scale, as well as the recourse to realism and stylization. In his works, we have a sudden attention to detail, a fading vein here, an absent gaze there, a suspended expression ... Transformed into sculpture, the everyday beings and objects used as models discreetly destabilize our points of reference, through these imperceptible shifts and transpositions, by a recourse to what the eye might, at first glance, interpret as a hyper realistic, quasi virtuoso obsession, but whose details and particularities evade detection. Without attributes, context, or a narrative, Charles Ray’s works manage, through their presence, mass and monumentality, to set themselves up as a universal figure, even to abstraction.

The artist enjoys making the viewer “look twice”. Through their “strange familiarity”, ambiguity, and flawless technical precision, Charles Ray’s works destabilize, similar to the effect of a hallucination, almost managing to unsettle the space around them, and even reality, surreptitiously leading the viewer into a form of fiction.

His works are rooted in a deep knowledge of the history of classical art and antiquity. They are inspired by the great exercises of statuary, the mastery and play on its iconic canons, all the while coming to life via the history, themes and procedures specific to the most radical contemporary art. Whether the work is produced in steel, fiberglass, aluminium, cement, paper or polished steel, Charles Ray’s practice brings together various processes, between craftsmanship and cutting-edge industrial technology, always concealing a complexity that is often prodigious and time-consuming.

The artist explains how, through his reading of the work of Alberto Giacometti and his slender figures in space, he came to no longer “think of sculpture” but to “think sculpturally”. His artistic practice places the question of space at the centre of his research and offers the viewer an experience of the relationship to reality that is more complex and mysterious. For Charles Ray, sculpture is the medium that establishes the most privileged relationship to space, and which most effectively explores this physical and psychic tension. The artist designs sculptures capable of acting on the spectator, in particular through the scale of the empty space that they require around them. Moreover, these works are rarely kept at a distance from the viewer, but are presented at their level, frequently without stanchions or pedestals.

AND AT THE TEATRO DE LA ZARZUELA IN APRIL