In the early eighteenth century, when the legendary art collection of August the Strong came into being, Asia was viewed with excited fascination in Europe.

In addition to today‘s world-famous porcelain wares, more than 1,100 Chinese drawings and watercolour paintings on paper and silk, as well as woodcuts and coloured prints, were brought to Dresden. This important collection, along with 850 chinoiserie prints, is preserve in the Kupferstich- Kabinett of the Staatliche Kunstsammlungen Dresden. In the first inventory of the Kupferstich-Kabinett, drawn up in 1738, the objects were listed under the categories “La Chine” and “La Chine européenne”. 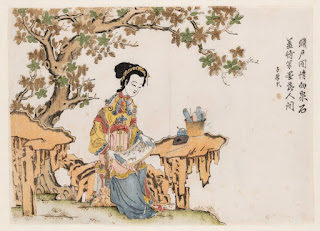 An outstanding feature is the large collection of Chinese popular prints. In China itself, such New Year pictures, congratulatory leaflets, and theatre scenes were considered mere commodities, so that hardly any have been preserved. The prints were cheap to buy. With their wideranging symbolism, usually promising good fortune and prosperity, these sheets were hung up in homes for the New Year or passed on as a blessing, for example, and usually were not preserved. In Europe, Chinese folk art was seen as documenting the costumes and customs of distant lands. In the courtly sphere, the sheets were used as wall decorations, for example. They also served as models for chinoiserie prints. These provided motifs for decorations on buildings and furniture, as well as for porcelain painting.