From his shadow to his gaunt face, the vampire Count Orlok in 1922's Nosferatu: A Symphony of Horror remains one of film's most spine-tingling creations. Nicholas Barber examines why. 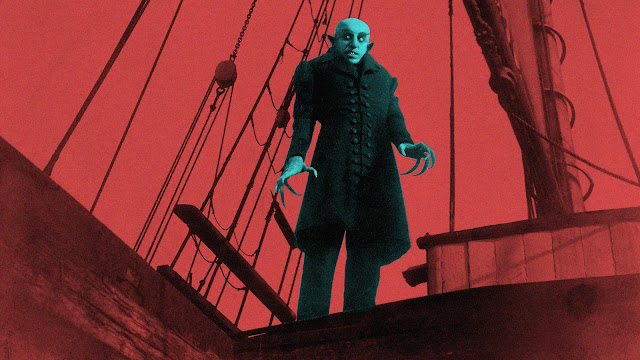 It was exactly 100 years ago, in March 1922, that Berlin's movers and shakers attended the premiere of FW Murnau's Nosferatu: A Symphony Of Horror, and saw the nightmarish Count Orlok springing bolt upright from his coffin. Those unsuspecting viewers could well have witnessed the first great jump scare in the history of horror movies. They had certainly witnessed its first great monster. An unofficial adaptation of Bram Stoker's Dracula – hence the Count's name-change from Dracula to Orlok – this silent masterpiece pioneered techniques and established horror tropes that have been used ever since. But the creation of the iconic Orlok, played by Max Schreck, is its supreme achievement. He is, says Cristina Massaccesi, in her guide to Nosferatu for the Devil's Advocates horror history series, "the Ur-Vampire, the father of all undead creatures lurking in the darkest recesses of a cinema screen".

He is also one of the few monsters to be instantly recognisable, even in silhouette. Murnau makes spine-tingling use of his shadow – and once you see the outline of Orlok's domed, bald head, his pointed ears, his hunched shoulders, his stick-thin body and his snaking talons, you know who's on the prowl. Then you see his gaunt, chalk-white face. More animal than human, Orlok has huge bushy eyebrows, sunken eyes, a beaky nose, and a rodent's incisors in the centre of his mouth (far odder than the sharp canines possessed by later screen vampires). As Kevin Jackson says in Constellation of Genius, his survey of 1922 in the arts, Orlok "must be the strangest and most hideous leading man in all cinema".

Much of the credit for this strangeness should go to the producer of Nosferatu, Albin Grau. A student of the occult, he wrote an article claiming that, during World War One, a Serbian peasant had told him of his own encounters with vampires: "Before this wretched war, I was over in Romania," said the peasant, allegedly. "You can laugh about this superstition, but I swear on the mother of God, that I myself knew that horrible thing of seeing an undead... or Nosferatu, as vampires are called over there." In 1921, Grau set up an independent studio, Prana Film, but he also worked closely with Murnau as the designer of Nosferatu. With no earlier vampire films to copy or to react against, Grau had to dream up something new – and his sketches of Orlok, a spindly, demonic alien with glowing eyes, are even creepier than the version in the finished film.

"Grau knew from the very beginning of the project how the vampire was supposed to look," Massaccesi tells BBC Culture. "He retains only a few elements already present in Stoker's novel, such as the pointed ears and aquiline nose, and he used a lot of connections with the undead of the Eastern European folkloric tradition. Orlok is a vermin-like creature, more at ease amongst rats than people.”

Some commentators have condemned this "vermin-like creature" as an anti-Semitic caricature. J Hoberman, a film critic who specialises in Jewish representation, notes in a 2020 essay for Tablet magazine that Orlock is an "ancient, tremendously powerful creature, a sort of humanoid rodent given an imposing hooked nose, who communicates with his minions in a mysterious code, which includes several Hebrew letters as well as the Star of David".  On the other hand, Hoberman argues, Nosferatu may project a primal fear of "foreign contagion" which isn't specifically fixated on Jewishness. "Nosferatu's script was written by a Jew, Henrik Galeen," he wrote. "The cast included several Jewish actors... [and] there is no suggestion that Murnau or Grau, who weren't Jewish, were anti-Semitic. Indeed, the love of Murnau's life, poet Hans Ehrenbaum-Degele, killed in the war, was the son of a Jewish banker."

Others have theorised how the abominable, ratty design of Orlok had to do with the traumas of the war – a conflict that Grau described as a "cosmic vampire" – and the subsequent Spanish flu epidemic: in the hold of a ship bound to Germany from Transylvania, the Count is accompanied by plague-carrying rats.

Orlok's skin-crawling make-up and costume are extraordinary, but Schreck's performance is key. With his uncanny stillness, and his slow, stiff movements, he commits himself to the gothic weirdness of the character while being more nuanced and restrained than most of his co-stars. In 2000, E Elias Merhige's behind-the-scenes fantasy, Shadow of the Vampire, proposed that Schreck (Willem Dafoe) was so convincing as an on-screen vampire simply because he was a vampire off screen as well. Well, you never know. But, given that he had a successful career in theatre and cinema, Schreck was probably just a brilliant actor. "It's a silent movie," notes Kim Newman, horror film doyen, and the author of the Anno Dracula series of vampire novels, "so Schreck can’t do Bela Lugosi's accent, and he can't use Bram Stoker's dialogue. He has to convey the wrongness by how he looks – and Orlok is the wrongest vampire of all."

Lugosi's accent, as mentioned by Newman, was heard by the world in 1931, when he starred in Tod Browning's Hollywood film of Dracula. Ever since, when we think of vampires, we tend to think of him: his Hungarian lilt, his oiled black hair, his bow tie, and his wonderfully swishable cape. Lugosi's suave, seductive Dracula would influence countless other actors, from Christopher Lee in the Hammer films to Adam Sandler, who voices Drac in the first three Hotel Transylvania cartoons. But if Lugosi's romantic interpretation of Dracula is the most influential, Schreck's repulsive Orlok casts his own shadow across the genre. "There are two main strains of cinematic vampires," says Professor Stacey Abbott, author of Undead Apocalypse: Vampires and Zombies in the 21st Century. "You have the Bela Lugosi tradition of the attractive, alluring vampire, but Orlok set the template for the macabre, pestilence-ridden vampire who is associated with disease and plague. He's who you turn to when you want to really capture the monstrosity of the vampire."

Since then, Orlok's descendants include the post-apocalyptic scavengers in I Am Legend, the ravaging blood-suckers in Guillermo del Toro's Blade 2 and TV series The Strain, the Pale Man in del Toro's Pan’s Labyrinth, and the gliding, grinning Gentlemen in "Hush", the spookiest episode of Buffy the Vampire Slayer. It's no coincidence that one of the Gentlemen, one of the Strain, and the Pale Man himself were all played by del Toro's regular collaborator, Doug Jones, who went on to star as Orlok in a remake of Nosferatu in 2016.

Alas, that remake is still locked in the basement of a Transylvanian castle – or, at least, it hasn't been released. But when Werner Herzog remade Nosferatu in 1979 with Klaus Kinski, he stuck with the look of Orlok, despite changing the Count's name back to Dracula. And recently Robert Eggers, the director of The Witch, The Lighthouse and this year's The Northman, has discussed the possibility of his own remake featuring Anya Taylor-Joy.

Whether or not it ever goes into production, what's fascinating about these proposed and actual remakes is that Murnau's original is, fundamentally, a Dracula film. If you're planning to remake it, why call your own film Nosferatu at all? Why not just call it Dracula? The answer is that Orlock's image is so powerful that, even though he's Dracula in all but name, he stands apart from every other Dracula there is. "I can't think of any other instances of a franchise being divided that early on in its history," says Newman. "It's a peculiar thing to happen, but this one particular version became a separate entity which then inspired its own separate remakes."

Orlok doesn't just inspire vampire films, either. One bizarre homage to his fashion sense is the Viktor & Rolf Spring 2022 Collection in which the Dutch designers imitate his high-shouldered, tightly-buttoned coat and long claws. There's even an argument that while post-Lugosi lotharios are the norm in horror movies, it is the reclusive, bald-headed Orlok who is the progenitor of such supervillains as Lex Luthor and Ernst Stavro Blofeld.

Dracula, you could say, has been defanged. A figure of fun in the likes of Love at First Bite and Hotel Transylvania, among many other comedies, he is, in effect, the self-parodying superstar beloved by mainstream audiences, whereas Orlok is the cooler alternative, the underground cult anti-hero who never sold out. "Browning's Dracula film was based on a Broadway production which Lugosi had starred in," says Newman. "When you see his Dracula smarming around a drawing room in evening dress, engaging in polite chit-chat, that all came from the stage play. But you wouldn't let Orlok into your drawing room. You wouldn't engage him in a battle of wits. If he came to the door, you'd run away screaming."

Even while he embodies unnatural evil, though, there is also something pitiable about the decrepit Orlok. "He is utterly scary and devastatingly sad at the same time," says Massaccesi. First seen isolated in his crumbling castle, with no sign of the three nubile vampire women who keep Dracula company, Orlok is initially just as keen to chat to Hutter (the film's equivalent of Jonathan Harker in Stoker's novel) as he is to bite his neck. "Should we not sit together, my dear friend," he pleads. "Sunrise is far away and during the day I have to sleep." Later, once he has moved to Hutter's hometown in Germany, he is shown gazing forlornly out of the barred windows of his new home, as lonely as he was in the remote Carpathian Mountains. "You could argue that he is trapped by what he is," says Abbott. "Again, there are two sides to vampirism in the cinematic canon. One is the thrill of being young and attractive forever. The other is the horror of immortality which leaves you weary and exhausted."

So let's raise a glass of something red to Count Orlok on his 100th birthday. Yes, he's a revolting, blood-sucking, plague-carrying mass murderer, but he's tragic, too. "The Anno Dracula novels are all about a society full of vampires," says Newman, "but I wanted to include a vampire who was beyond the pale. I used Count Orlok, because it suited the character so well. Even among vampires, he's the vampire that no one wants to talk to."