The miniature painting on this Persian folio is attributed to Aqa Mirak, described by his peer Dust Muhammad as ‘the genius of the age, the prodigy of our era’ — and the artist who made the most valuable Islamic painting ever sold at auction

Roughly halfway into his 52-year reign, Shah Tahmasp (1514-1576) of Iran dismissed almost all the artists, poets and musicians who had helped bring about a cultural flowering at the start of it. This was because of a growing sense that the arts were at odds with religion.

Tahmasp duly signed the Edict of Sincere Repentance in 1556. One of the few artists retained in the royal atelier after that was Aqa Mirak, a figure described by his peer, the miniature painter and art historian Dust Muhammad, as ‘the genius of the age, the prodigy of our era’.

Mirak also received praise from several other contemporaries, but it was Muhammad who expressed it most memorably, hailing his ‘God-given might’ and the way ‘he but picks up his brush [to produce] pictures of unparalleled delight’. 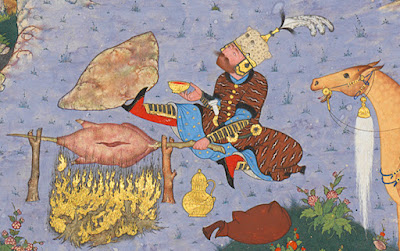 On 31 March, one of the artist’s classic works is being offered in the Art of the Islamic and Indian Worlds including Oriental Rugs and Carpets sale in London.

The work (below) is a folio from the Shah Tahmasp Shahnama, widely regarded as one of the finest illustrated manuscripts ever made. Comprising 759 folios of text, more than 250 of which feature paintings, the manuscript is named after Tahmasp because it was completed under his rule. It had been commissioned by his father — the previous ruler, Shah Ismail — a few years before his death, and took around two decades to finish.

If that seems a long time, it’s worth bearing in mind what exactly was being created: the most lavishly illustrated copy yet of the Iranian national epic, the Shahnama. The poem contains 50,000 rhyming couplets and tells the history of all Persia’s rulers, from the country’s ancient mythical beginnings through to its conquest by the Arabs in the mid-7th century AD.

The Shahnama, or ‘Book of Kings’, was composed by the poet Abu’l Qasim Firdawsi in 1010 and went on to become a great source of national pride. It also served as a primer for subsequent shahs about correct conduct and how to rule. New copies of the epic (often illustrated ones) were commissioned by monarch after monarch, as a way for each to present himself as rightful heir to the rulers of yore.

In the case of Ismail there was added significance, given that in 1501 he had founded a new dynasty, the Safavids, the first indigenous Persian dynasty since the Sasanians. (It was the Sasanians who fell to Arab invaders in the mid-7th century, with rulers of Mongol and Turkic descent also assuming power in the centuries thereafter.)

When it came to the Shah Tahmasp Shahnama, no expense was spared — by Ismail or Tahmasp. Several artists worked on the manuscript, with three outstanding figures given overall control at different times: Sultan Muhammad, Mir Musavvir and, finally, Aqa Mirak, who oversaw roughly the final third of the project.

With a little help from an assistant, Mirak personally painted the folio coming to auction. Dating from around 1530, it depicts one of the poem’s heroes, the legendary warrior Rustam, in a mountainous landscape. Rustam can be seen sitting while holding a cup of wine and spit-roasting an onager (a type of wild ass).

A large boulder has also just been hurled at him down a mountainside by his adversary, Bahman. The latter was so wary of Rustam’s strength that he wished to avoid meeting him in direct combat.

According to the text at the top of the page, our fearless warrior ‘ne’er moved nor laid aside the onager. He waited till the stone was close to him, then with a kick dispatched it far away.’ His brother and fellow warrior, Zawara, depicted with his horse in the picture’s top right, watches on in ‘wonderment’ at Rustam’s coolness.

The boulder scene was a favourite among Shahnama  illustrators, and another version of it — dating from the Timurid era almost a century earlier, and pictured below — also appears in the Art of the Islamic and Indian Worlds sale.

Rustam, who is said to have lived to the age of 500, features in numerous episodes in the Shahnama. He personified loyalty to the Persian throne and spent his long life serving and advising different kings. (Rustam is accompanied on many adventures by his horse, Rakhsh, a once-wild stallion that only he had had the speed and strength to tame.)

Mirak’s painting on this folio is a masterclass in compositional invention. It is structured along an invisible diagonal line. This connects the green mound where Rakhsh stands, in the foreground on the bottom right; the central figure of Rustam; the rocky peak of the mountain; and Bahman, who has scaled it, in the picture’s top left. The two enemies are forever frozen in the moment, looking at each other directly along this line.

Incidentally, it’s not just Bahman who appears to threaten Rustam. The mountain does, too — seeming almost to rear up, curl over and point at our hero.

Also worthy of note is Mirak’s command of space. There is no visual overload, as in certain folio paintings. All the people and objects — including flora — are spread out and given their own area of influence. The artist included fewer flowers than his contemporaries, which allows each red flower-head to glow brilliantly in its own space.

Not long after its completion, the Shah Tahmasp Shahnama  was presented to the Ottoman sultan, Selim II, in Istanbul, to mark his accession, having been sent to him with a convoy of 34 camels.