A HISTORIC MARIONETTE THEATER IN LA LIVES ON, AND IT’S STILL MAGICAL

The Bob Baker Marionette Theater — the country’s longest-running puppet theater — has found a new space that seems like a natural fit.
Matt Stromberg 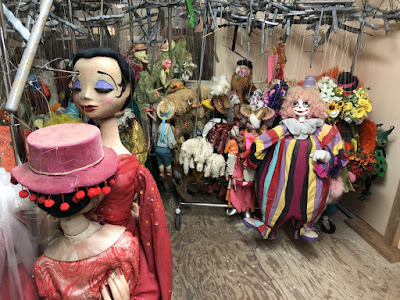 LOS ANGELES — This past May, a small team was busy putting the finishing touches on the new home of the Bob Baker Marionette Theater in Los Angeles’s Highland Park Neighborhood. An artist painted a bucolic scene of rolling green hills on the walls, while a group of workers on a scissor lift carefully hung a large chandelier from the ceiling. A Wurlitzer organ on loan from the LA Theatre Organ Society sat covered in plastic waiting to be unwrapped. Bunches of marionette puppets hung on racks, though the majority were still at the location the theater had occupied for over 50 years on First Street in the Westlake District. “The last thing that hasn’t moved over which gives me stress dreams are the puppets,” said Winona Bechtle, the theater’s director of development and community outreach. “They’re still at the old spot. All 3,000 puppets.”

Los Angeles native Bob Baker became infatuated with puppets at age seven after his father took him to a Christmas puppet show at the Barker Bros. Department Store at Flower and 7th Streets in Downtown Los Angeles. He started his own “Petit Theatre” in his backyard while still a child, and began his career as an animator and puppeteer for various studios, including Disney. In 1963, he and partner Alton Wood opened the Bob Baker Marionette Theater in a former scenic shop on the border of Echo Park and Westlake. Over the ensuing decades, over one million children would be entertained by Baker’s original puppet productions. Although Baker died in 2014 at the age of 90, his devoted company continues to honor his legacy at the oldest children’s theater in Los Angeles.

The new space — originally a silent movie theater, known as the York Theatre, dating back to 1923 — seems like a natural fit for the country’s longest-running puppet theater. But last fall, the company’s future was anything but guaranteed. Faced with economic uncertainty, Baker sold the original building to a developer in 2013 for $1.3 million. A planned mixed-use development on the site originally included the theater, which was designated a Historic-Cultural Monument by the Los Angeles City Council in 2009. However, later proposals for the new property drastically reduced the theater’s size. With no guarantee that their longtime home would be viable even after the construction dust settled, Bechtle and Alex Evans, the executive director and head puppeteer, decided to jump without quite knowing where they would land. “We closed just willing this into existence with nothing behind it other than a lot of work and knowing that we wanted to do it,” Bechtle said. A closing ceremony was held last November 23, the same date that the theater opened 55 years earlier.................