“This feels like a loss,” said Andrea Prasow of Human Rights Watch while touring the museum, flagging several errors in how curators have presented the history of torture and interrogation.
Zachary Small 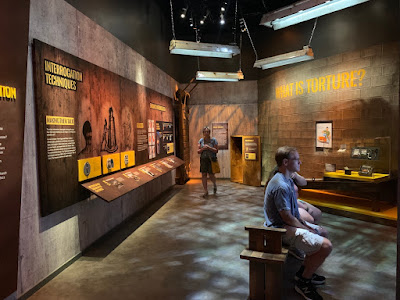 WASHINGTON, DC — The International Spy Museum is filled with dystopian versions of fun. One room includes a pair of mailboxes, which participants can open to see if they’ve received an exploding letter bomb or not; another features a faux interrogation room dedicated to the Stasi police of the Cold War’s East Germany. But the most popular game — one which regularly draws a crowd of onlookers — is called “The Hunt for Osama Bin Laden,” an elaborate digital recreation of the Al Qaeda leader’s assassination complete with a scale model of his Pakistani hideout and guidance from Cynthia Storer, a former senior terrorism analyst for the Central Intelligence Agency. The immersive game allow participants to control the operation, surveilling Bin Laden’s family and associates before ultimately striking the compound with lethal force.

For someone who has spent her career defending human rights, the scene was disheartening. “We know we have won when the history books get things right, but this feels like a loss,” said Andrea Prasow after touring the museum with Hyperallergic.

Prior to becoming the Washington, DC deputy director for Human Rights Watch, an advocacy group investigating abuses around the globe, Prasow spent years as a lawyer defending the habeas rights of Saudi detainees caught in the judicial limbo of Guantanamo Bay. She also served as assistant council for Salim Hamdan in the only contested military commission trial to date. And it’s precisely because of her expertise in counterterrorism and national security that a walk through the International Spy Museum provokes worry.
After a $162 million move to its new location at L’Enfant Plaza, the International Spy Museum has revamped its permanent exhibition detailing the history of espionage from America’s founding to present day. But the nonprofit frequently struggles to balance its mission to educate with its desire to entertain. That’s immediately clear from the lobby (which hosts an Aston Martin DB5 from Goldfinger and a replica of the Turtle, a submersible from the revolutionary war) to the various galleries that mix Hollywood with history.

The majority of spyware on display belongs to Keith Melton, who holds one of the largest collections of espionage artifacts in the world and sits on the museum’s board of directors. “I preserve and protect,” the longtime historical advisor to the CIA told the New York Times in January. “I don’t look at things politically.”

Maybe that’s true for the collection itself, but the museum’s curation often skews historical facts in favor of the intelligence community. And while it’s evident that curators aspire toward impartiality, their attempts in wall texts and video testimony elucidate a false balance between the people who have benefited from spycraft and those who suffer from it. Such a narrative benefits the intelligence community, which has struggled to attract support from the majority of young Americans. And it’s good public relations for the museum’s trustees and donors, many of which are involved with private cybersecurity firms and government contracting.

Or to borrow a phrase from actor Morgan Freeman’s narration of the museum’s opening video: “All is not what it seems.” As Prasow observed toward the end of our tour, nowhere do curators explicitly mention that spying is technically illegal. Virtually all countries prohibit foreign governments from espionage, even if in reality most employ their own intelligence operatives. The United States outlawed the practice itself as early as 1917 with the Espionage Act, which succeeded the earlier Defense Secrets Act of 1911, a law that criminalized the disclosure of government secrets.

This version of paradoxical exceptionalism for spycraft has contributed to the alternative legal framework and public complacency that bolsters its legitimacy. Presidents have defended the use of spying against their own citizens by the National Security Agency (NSA), which gained unprecedented surveillance powers from the Patriot Act after the September 11 terrorist attacks and continues to monitor Americans six years after Edward Snowden released highly classified information about the program. Another version of the International Spy Museum may treat these facts as cornerstones to its narrative; instead, curators have minimized these details in favor of a high-production celebration of the security apparatus.

Which is to say that tourists genuinely enjoy themselves inside the International Spy Museum’s immersive galleries where they can pretend to interrogate each other, explode letter bombs, and kill Osama bin Laden. But should visitors leave the museum so happy?

Several lawyers and former CIA analysts say no, arguing that the DC institution has padded its most controversial exhibit on interrogation with patently false information and subterfuge. While the permanent exhibition begins with a largely benign survey of famous spies (Dmitri Bystrolyotov, Sidney Reilly, Mata Hari) and gadgetry (pigeon camera, flashlight gun, rectal toolkit), it later turns toward the disputed ethics of post-9/11 counterterrorism operations with an installation called “Interrogation: Who Knows.”

Text near the room’s entrance asks: “Even if it’s effective is harsh interrogation compatible with our ethics and values?” Illustrations of torture equipment through the ages line one wall, which also features an abridged historical debate about the practice’s viability (George Washington and Napoleon Bonaparte? Against it. Imperial Japan and the Bush administration? For it.) The installation also includes several cartoons featuring a dark-skinned man with facial hair being experiencing several forms of torture alongside an image of the World Trade Center exploding. Additionally, curators have staged a waterboarding table and a “stress box” in which detainees of the “War on Terror” were pretzeled into for hours or days.

Having worked directly with Guantanamo detainees who have experienced torture, Prasow found the installation disconcerting and factually incorrect. First off, the display’s uses the terms torture and interrogation interchangeably, especially in texts that are actually discussing the former. Secondly, the exhibit’s language suggests that torture might be an effective tool, but there is no evidence that it produces valuable intelligence.

“Interrogations extract confessions, not information,” she noted. “It’s a failure of the post-9/11 world that people think it’s valid to discuss the merits of torture. Where does this line of thinking end?”

Prasow also pointed out the photograph attached to the room’s “stress box” featuring a mugshot of Abu Zubaydah, who experienced the torture device as the first detainee captured in the “War on Terror” under the presumption that he was a high-ranking member of Al-Qaeda. She wondered aloud if the museum obtained a privacy waiver from him. Prisoners aren’t allowed to profit from illegal conduct, but technically, he’s not a prisoner. Zubaydah has never been charged with a crime and remains in Guantanamo nearly 13 years after his last transfer. 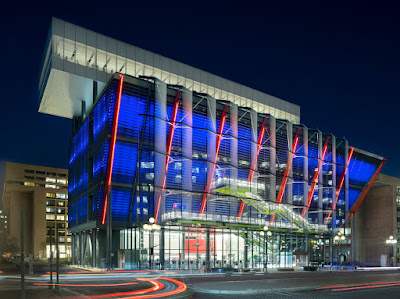 Surrounding explanations and annotations clearly try to present a balanced view, including a video with five people speaking for and against enhanced interrogation tactics. Two who speak in support of the program are also, not coincidentally, its chief architects: military psychologist James Mitchell and CIA contractor Jose Rodriguez, a former head of the agency’s clandestine services.

“I decided that I had a greater moral obligation to use what I knew about psychology and what I knew about resistance to interrogation to save American lives than I did about the temporary discomfort of a terrorist,” says Mitchell in his testimony.

Here, the museum neglects to mention that Mitchell was central to a damning 2014 report from the Senate select committee on intelligence that suggested the CIA misled elected officials and the pubic; that unauthorized interrogation methods were used; that the legal opinions defending enhanced techniques were flawed; that torture yielded no useful intelligence. And nowhere does the museum mention that Mitchel received $81 million in contracts to develop and conduct the torture program. The installation also fails to explain what Rodriguez is best-known for — ordering the destruction of 92 torture tapes, some of which recorded prisoners undergoing enhanced interrogation techniques. Many government watchdog groups, including Human Rights Watch, have called for Rodriguez’s prosecution.

A wall of propaganda posters, which includes both materials and explanations on the back of each panel (photo by author)
Enhanced interrogation techniques like waterboarding rely more on cognitive tactics than explicit violence. It’s about controlling a suspect’s entire field of perception so that the sensation of dying can last forever. This hijacking of the brain’s processing powers elevates adrenaline levels, producing a brain-washing effect powerful enough to extract a false confession from the subject.

The International Spy Museum likewise plays mind games with its visitors, presenting the veneer of objectivity without explicitly naming its biases. For a lawyer like Prasow, the museum’s immersive setup is worrisome because it skews public discussion away from understanding torture as a demonstrably bad form of intelligence-gathering to something with possible undiscovered benefits.

But then again, the media’s glamorization of spycraft may have already colored the public’s interpretations of spycraft. “To be a spy is to be on the frontlines of war,” announced the godlike voice of Freeman during the museum’s introductory video as images pass across the screen with captions like “mass migration” and “extreme nationalism.” Like a war, history also has its own sides. It’s just that the International Spy Museum pretends like interrogation tactics are a settled debate.