HOW VENETIANS ARE REINVIGORATING THE RICH TRADITIONS OF MURANO GLASS

Casey Lesser
On the Venetian island of Murano, the storied glass workshop Specchi Veneziani Barbini is known for making ornate, engraved mirrors. Their gleaming designs range from elegant rectangles etched with delicate foliage motifs to Rococo-esque pieces draped in flowers and ribbons, like icing on a cake. The family-run workshop was founded by Nicolò Barbini in 1927, and is now run by his kin; but the family’s esteemed Murano glass lineage stretches back centuries. In 1665, several Barbini ancestors were secretly whisked away to Versailles to work on Louis XIV’s legendary Hall of Mirrors. 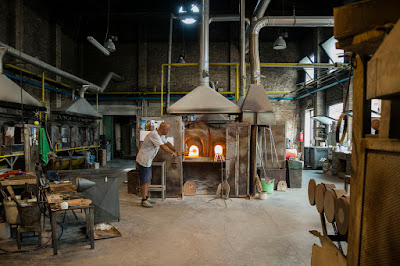 The high-profile expedition needed to be covert because for centuries, Venetians heavily safeguarded the trade secrets of Murano glass. In the late 13th century, a guild was born to protect the industry; and later, laws passed to move all of Venice’s glass furnaces to Murano, and to prohibit its glass masters from working elsewhere. As new generations came of age, the secrets were passed down from father to son. Even now, family-run establishments are common, but these days, Murano glass needs a new kind of safeguarding.

While there were hundreds of furnaces producing glass a few decades ago, now there are only around 50. Various factors are to blame: Rising production costs, the proliferation of mass-produced, cheap glass trinkets made in China, and a scarcity of collectors. Despite its rich traditions, Murano no longer represents the forefront of artistic glass, as new international hubs have arisen.In response, in the past decade or so glass furnaces have embraced openness and innovation; they are more inclined than ever to share their expertise with international artists and designers. And Venetians are building a greater audience for Murano glass. Arts organizations and institutions are working to preserve Murano’s history and raise its international profile through initiatives like Venice Glass Week, now in its third edition this September 7th–15th. 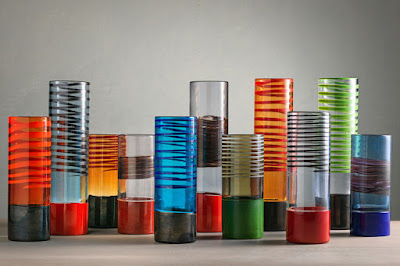 Venice Glass Week co-founder David Landau and his wife Marie-Rose Kahane have been major players in the recent promotion of Venetian glass. The philanthropist couple has a world-class collection of Venini glass—one of the most important glass furnaces of Murano. When they moved to Venice a decade ago, they “were expecting to find a tremendous amount of activity around glass—exhibitions and events, lectures and symposia,” Landau explained. “And when we arrived, there was absolutely nothing at all.”

To rectify the situation, Landau decided to build a kunsthalle for glass, Le Stanze del Vetro, a collaborative initiative of his foundation, Pentagram Stiftung, and Venice’s Fondazione Giorgio Cini. The exhibition space opened in 2012 in a former school building on the island of San Giorgio Maggiore. Its sleek interiors were designed by Annabelle Selldorf and now host two shows per year, one dedicated to a chapter of Venini’s history, and one to 20th- and 21st century glass more broadly. “We thought that would be a way of reviving interest in glass, which seemed to be waning,” Landau offered. “And it did.”......................