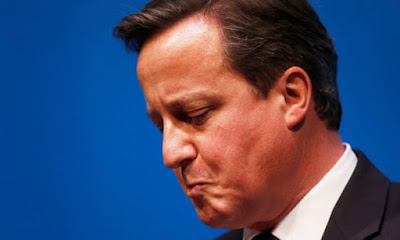 ‘The man who put his country through years of polarising trauma’: David Cameron during the closing days of the Scottish referendum, September 2014. Photograph: Murdo MacLeod/The Guardian

Neville Chamberlain died in November 1940, just six months after the bankruptcy of his policy of appeasement towards Hitler had forced his resignation as prime minister. This was unlucky because he did not live long enough to write a memoir trying to justify himself. This was lucky because he was not around to hear himself being pilloried as one of the most calamitous leaders in British history.
David Cameron, who was an ex-PM at the young age of 49, is doomed to be remembered as a Chamberlain-class prime minister and fated to know it. Now and for ever more, he will be defined by the one epic misjudgment that terminated his time at Number 10 and hurled his country into the vortex of chaos in which it is still trapped more than three years later. In the unlikely event that Brexit ultimately proves to be a brilliant idea, he will not be able to claim any credit for an enterprise that he opposed. In the rather more likely event that leaving the EU proves to be the gravest error in Britain’s modern history, he will rightly shoulder a vast weight of the blame. And in the event that Brexit is reversed, Cameron will be remembered as the man who put his country through years of polarising trauma for no purpose.

Brexit is the giant, dark cumulonimbus that squats over the pages of this long memoir from its first sentence. You can sense that the author dreaded arriving at the chapters where he would have to explain himself, for the earlier ones are bulked up with some stodgy padding that could have benefited from more ruthless editing.

In the build-up to the breaking of the storm that sweeps away his career, the tone is largely sunny. He is amusing about the “tiny gene pool” at his hideous prep school, the classic posh English combination of privilege and brutality, where the Duke of Bedford and Prince Edward were among the “dorm captains” and the “spartan diet” included a dish of “curry, rice and maggots”. He is moving about his son, Ivan, writing of his death: “It was as if the world stopped turning.” He tends to the bland when discussing other leaders, but there are a few tangy titbits. I enjoyed the anecdote about Silvio Berlusconi taking Cameron into the then Italian prime minister’s bedroom, showing off an ancient two-way mirror and explaining: “They didn’t have porn channels in the 15th century.” He reminds us that he was occasionally brave as prime minister, legislating for gay marriage against the fierce opposition of reactionaries in his party. One Tory came to the constituency surgery to tear up his membership card in front of Cameron.

The book’s voice is not as humble as the interviews he has given to promote it. There are lengthy tracts of self-justification as he relitigates every controversy of his career before almost invariably coming tWhen he addresses the choice that immolated his premiership, Cameron is sufficiently sensible to know that a tsunami of derision would have come down on his head if he did not admit to some mistakes. So he agrees that he underestimated the toxifying effects on public opinion of years of rubbishing of the EU by the Tory party and its media. He accepts that he ought to have made a more positive case for membership. He just about acknowledges that he chose the worst possible time to hold the referendum. What he cannot confess is that it was a terrible mistake to make that cavalier promise in the first place when he had not a clue what he would extract from his “renegotiation” with the EU and no idea what the atmospherics would be like when he had to make good on the pledge. He continues to insist that a referendum was “necessary and, I believe, ultimately inevitable”. Here he is hiding from the truth, probably because confronting it would be too much to bear. Far from being “necessary” or “inevitable”, there was no nationwide clamour for a vote on EU membership when he made the pledge in 2013. Europe rarely made the top five when pollsters asked voters to tell them which issues were bothering them most. Cameron “resents” the accusation that he made the promise because he had a party management problem with a fervent minority on the right only later to half concede that this was indeed a factor in his calculations. “I don’t argue that the referendum pledge had nothing to do with party politics.” It was not a courageous decision arrived at in the national interest; it was a cowardly one made in a panic by a leader running scared of Nigel Farage and the ultras in the Tory party.o the conclusion: “I was right.”

One value of this memoir is that it offers some character clues about why his career soared and then self-destructed. He was born into home counties upper-middle-class affluence. As a teenager, he was nagged by the thought that he was “slightly mediocre” with “a weakness for going with the crowd, even when the crowd was heading in the wrong direction”, but insulated by a dash of charm. At Eton, he spent summer afternoons with friends getting “gently off our heads” smoking hash. Caught, he swerves expulsion by telling “more and more elaborate lies”. It may have been then that he first started thinking that there was no scrape he could not wriggle out of. At Oxford, “I fell in love. Lots of times.” That’s a sentence that doesn’t sound as attractive as he thinks it does.

Before he reached No 10, he was once asked why he thought he should be prime minister. “Because I would be good at it,” was his glibly insouciant reply. I recall being invited to lunch with him in Downing Street early on in his premiership. Knowing that many previous occupants of the office have found its responsibilities a shock, I asked what had surprised him about being prime minister. “Nothing really,” he replied, a nonchalance he intended to be reassuring, but which I found a bit disturbing. This hubris swelled with time. The defeat of Scottish independence in 2014 and his election win a year later were both squeaky bum campaigns and the victories ultimately achieved were by quite tight margins. Rather than conclude from this that he had been fortunate to pull them off, he started to believe there was no gamble he could not risk and win.
Cabinet colleagues considered Cameron to be smart, but not an original thinker. Others first conceived the Tory “modernisation project” that he used to rebrand them in opposition. His response to the economic situation that he inherited in 2010 was a highly conventional and painful dose of fiscal contraction that exploded his pretensions to build a “big society” and undid a lot of his previous effort trying to prove that the Tories were no longer “the nasty party”. You can now find quite a lot of Conservatives who think they overdid austerity. Cameron believes the opposite, arguing that “we might as well have ripped the plaster off with more cuts early on”. He doesn’t join any of the dots between the squeeze on disadvantaged communities and the increasing alienation among the “left behind” that helped to power the Leave vote. 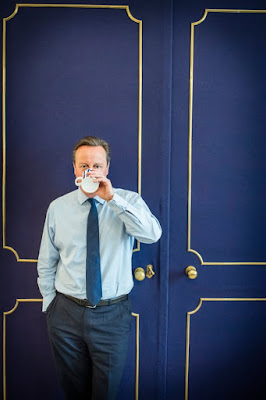 He thinks himself a good judge of character and yet was often anything but. He gave a senior job at No 10 to Andy Coulson, the former newspaper editor who was later jailed for his part in the phone-hacking scandal. He made Steve Hilton – “one part brilliant to several parts bonkers” – his principal strategist at No 10 only for Hilton to quit in frustration at what he saw as Cameron’s lack of radicalism and later campaign on the other side of the Brexit divide. He lubricated the ascent of Boris Johnson and promoted Michael Gove, the duo who would be his nemesis as the “ambassadors for the expert-trashing, truth-twisting age of populism”. The two frontmen of the Leave campaign are the principal villains of Cameron’s account. Johnson “didn’t believe in Brexit” and “risked an outcome he didn’t believe in because it would help his political career”. The “mendacious” Gove, a man he had counted as “one of my best friends”, was serially treacherous and turned into a “foam-flecked Faragist”. These are not original accusations, but the charges have additional force when they are levelled by their former leader and chum. Here, the memoir oozes bitterness from the still weeping wounds of a man who feels betrayed. When Gove subsequently does the dirty on Johnson, Cameron sends Johnson a text: “You should have stuck with me, mate.” Johnson responds: “Blimey, is he (Gove) a bit cracked or something?”

How incestuous they are, even when at one another’s throats, this clique of frenemies who have wielded so much influence over Britain in the years since 2010. Cameron likes to bemoan the way in which Brexit became a “Tory psychodrama”, but he was the actor-manager who put the dysfunctional cast of this never-ending tragi-farce on the stage and trapped the whole of Britain in their theatre of the absurd.

Theresa May was never one of the gang. When they fell out, Cameron looked to her to be an instrument of his revenge on Johnson and Gove. Although he posed as a neutral in the contest to succeed him, he reveals that he secretly gave encouragement to May’s leadership campaign. When she became prime minister, “I felt relieved that I would be passing the responsibility to a safe pair of hands.” That was another misreading of character that failed to anticipate what she would do with the premiership. One of her first acts was to call in George Osborne, Cameron’s closest friend in politics, and sack him as chancellor in the most humiliating fashion. To this day, Osborne upbraids Cameron: “I told you not to do that fucking referendum.”
Cameron says he knows “I failed”. This memoir doesn’t convince me that he fully grasps why.
• Andrew Rawnsley is the Chief Political Commentator of the Observer