THE AESTHETICS OF UGLINESS. AT WHAT POINT DOES AN IMAGE BECOME OBJECTIONABLE?

David Carrier
In 1831, Honoré Daumier depicted the French monarch Louis-Philippe in a newspaper as a pear, a fathead in French slang.
When the government complained, he published a diabolically clever four-stage image narrative demonstrating the slippery slope that transformed the depiction of the king into the representation of a pear — a process that seemed to ask: At what point does my image become objectionable? 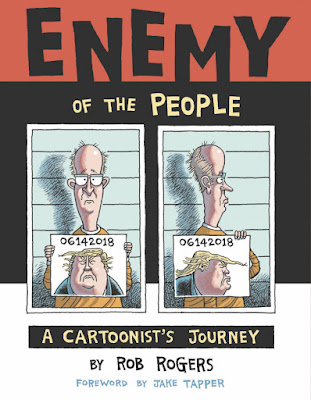 In the new book Enemy of the People (IDW Limited, 2019) depicting his travails since he was fired in 2018 from Pittsburgh’s daily newspaper, the Post-Gazette, cartoonist Rob Rogers alludes to that story with an image showing his current best subject, Trump, as a turnip, a pear-like shape.
Moralizing about the content of Rogers’s images would be preaching to the choir. But what deserves attention, I think, is how his caricatures work. Interpretation of Nicolas Poussin’s paintings is complex and frequently controversial. Sometimes just identifying his esoteric subjects takes scholarship. Newspaper caricatures, by contrast, need to be immediately accessible, though of course some of Rogers’s contemporary references and allusions to life in Pittsburgh can be obscure. But because caricatures are simple-seeming contemporary popular artworks, widely read but with little prestige in the art world, they don’t regularly get the respectful analysis that they deserve.

Rogers’s new book includes a generous sampling of his recent work. Usually he employs a single image. On August 12, 2017, he showed Trump together with Nazis and KKK members singing, “We Shall Overcome.” So far as I know, Trump doesn’t sing, and certainly has not sung publicly with Nazis and the KKK. But since he has implicitly supported their white nationalist sympathies, here we have truthful exaggeration.

Likewise, on January 25, 2018, In a cartoon labeled “I, Donald,” Rogers depicted Trump in a tutu and brandishing a length of pipe as he ice-skates around a fallen female rival bearing the initials “FBI” — an allusion to I, Tonya (2017), the film about the controversial figure skater Tonya Harding — to illustrate Trump’s thuggish lawlessness. And when on November 15, 2016, a week after the election, he portrayed Steve Bannon turning into a werewolf as he howls at the sight of an ascendent Trump-in-the moon, he perceptively plumbed the fear and loathing that gripped the majority of Americans who had voted against the president-elect. 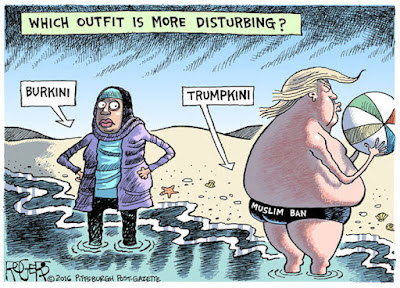 When the topic calls for it, Rogers would use a narrative sequence. On September 26, 2017, a three-panel strip showed an aged white veteran complaining in what appears to be , in the first two panels at least, a Trumpist diatribe about “some spoiled millionaire” disrespecting the flag. Then the third panel reveals the surprise punch line: he is in fact complaining about the president’s vicious attacks on “the free speech of athletes,” alluding to Trump’s vilification of football players who kneel during the National Anthem.

In another narrative, this one from 2016, Rogers describes his creative process. After finding “a topic that begs for satire,” he chooses a “perfect metaphor,” draws the cartoon, and then stands back, or so he says, to “watch as readers react to your brilliance.” (A joke!) But of course it isn’t that simple. A news reporter might use up to 2000 words to write a story , while a caricaturist needs to condense that story into a single image or a brief sequence of images. Thus on January 13, 2015, Rogers showed Muhammad, Buddha, and Jesus sitting in a bar, the three religious figures lamenting the terror practiced in their names…………….