The pianists Jenny Lin and Adam Tendler explain why “Poetic and Religious Harmonies” is better underground than at Carnegie Hall. 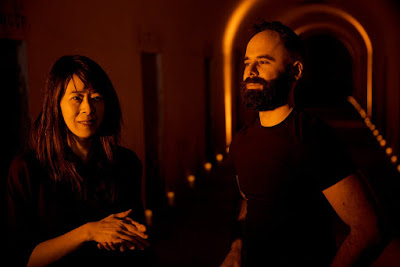 Jenny Lin and Adam Tendler inside the Green-Wood Cemetery catacomb, where they will perform Liszt’s “Poetic and Religious Harmonies.”CreditCreditKevin Condon/Death of Classical

If you haven’t heard of Liszt’s “Poetic and Religious Harmonies,” you’re not alone.
Performances and recordings of the 10-movement cycle, nearly an hour and a half of music for solo piano, are rare. Few performers are willing to take on not only its daunting scale, but also its grueling restraint — a cohesion held together in a delicate tension of wild Romanticism and controlled transparency.
It is, in other words, not your typical Liszt. Tellingly, the most famous section, “Funérailles,” is also the closest “Harmonies” gets to the pyrotechnic showiness that has made Liszt a favorite for encores.
“This is definitely a very private Liszt, one who’s retreated to his inner self,” said the pianist Jenny Lin. “I don’t think you could do this at Carnegie Hall. It would be weird.”
So when Ms. Lin and Adam Tendler share “Harmonies,” Sept. 24-27, they’ll be far from Carnegie, in a much more intimate space: the catacomb of Green-Wood Cemetery in Brooklyn. It’s the latest installment of The Angel’s Share, a series organized in the cemetery by Andrew Ousley, of the wryly named organization Death of Classical, which also presents The Crypt Sessions, concerts in the crypt at the Church of the Intercession in Manhattan.
Mr. Tendler and Ms. Lin aren’t typically associated with Liszt, or 19th-century music at all. But, to them, that’s part of the fun.

“We’re raised on this stuff,” said Mr. Tendler, who conceived the program. “It’s in our bones. And now we can come at this music with a different kind of lens.”
And it didn’t take long for them to see just how modern “Harmonies” can be. “In a very contemporary way, he’ll do all these shifts in harmony,” Mr. Tendler said. “You see him playing with harmony, like: ‘What will this chord sound like after this chord?’”
But the two pianists were also struck by the uncharacteristic reserve in Liszt’s score. There are long sections with symphonic heft and athletic fingerwork, but many movements are brief, direct transcriptions of sacred music. The cycle is full of breaths and silences, with a fermata on nearly every page: sometimes over consecutive notes, sometimes over entire measures of rest.

“Depending on the acoustic and your mood, it can be done so many different ways,” Ms. Lin said. “I don’t have a set idea for the timing like you would in a piece by Brahms or Schumann.”….....