The Athens and Epidaurus Festival is the city’s annual arts festival and a highlight of the Greek summer calendar. With a legacy that spans more than sixty years, today it incorporates a full programme of music, theatre, dance and visual arts that takes place at various venues around the city, including the former industrial buildings at Piraeus 260, the Ancient Agora of Athens and the Onassis Cultural Centre. Performances at the two ancient amphitheatres of Odeon Herodes Atticus and the Theatre of Epidaurus are highlights of the festival. Both theatres are famous for their exemplary acoustics and many of the great works of classical playwrights such as Sophocles who premiered at the Epidaurus theatre in ancient times. 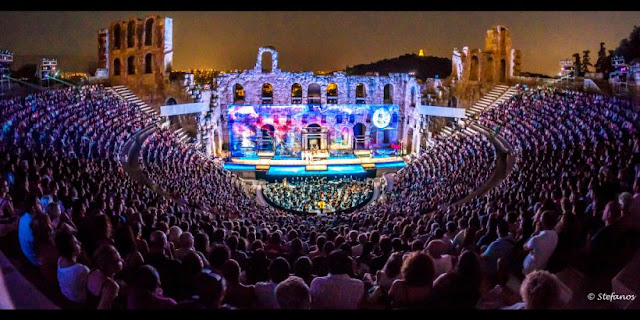 A theatre performance at the Odeon of Herodes Atticus Photograph: Stefanos, courtesy of Athens and Epidaurus Festival

The festival will once again present a diverse programme that has been described as youthful, alternative and political. There is a nod to the city’s cultural heritage with a full schedule of ancient Greek drama, comedy and tragedies showing at Epidaurus theatre throughout July and August. The performances showing at the Odeon of Herodes Atticus in Athens and Epidaurus (a two hour drive from the city) are listed below.