NERO ROCK OPERA IS A BURNING ISSUE IN ROME 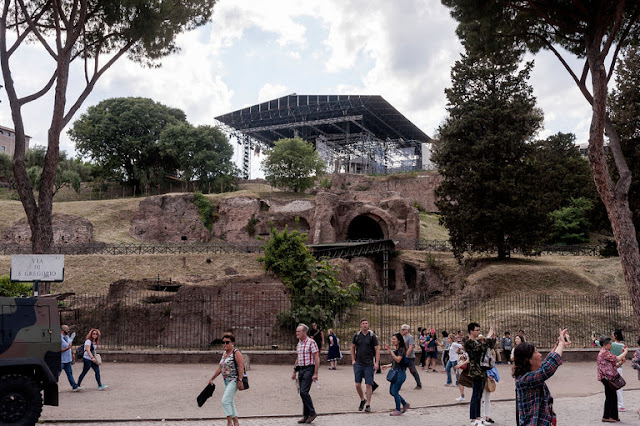 A temporary theater on the Palatine Hill in Rome is hosting the rock opera “Divo Nerone.” Credit Stefano Montesi/Corbis, via Getty Images

ROME — The emperor Nero and the city of Rome have always had a strained history. So it should come as no surprise that a recent attempt to resurrect that tyrant through a song-and-dance extravaganza titled “Divo Nerone — Opera Rock” provoked a fiery debate here after state culture officials allowed the construction of a sizable theater for it smack in the middle of Rome’s main archaeological site.

The 3,000-seat theater was erected temporarily on the Palatine Hill, which Nero incorporated into his imperial estate after the notorious fire of A.D. 64 that devastated Rome. A temple to a sun god built here in the third century A.D. during the reign of Elagabalus was poached centuries later for its marbles, and the theater was assembled over some of those ruins.
“This may not be the first grave abuse perpetuated against Rome’s monuments, but it is certainly the most serious, both for the size of the structure,” which alters the archaeological site, and because researchers will not be able to excavate for the three months of the show’s run, Adriano La Regina, the former caretaker of Rome’s antiquities, wrote in the Vatican newspaper The Osservatore Romano last month. He called the theater an “offense to the beauty of the city.”
Other archaeologists and conservationists labeled the construction an “eco-monster” out of place in one of Italy’s renowned archaeological parks.
Continue reading the main story
For some critics, too, the musical is a symbol of how commercialism has increasingly and clumsily encroached on the country’s cultural heritage, once seen as a sacred bastion for research and learning. 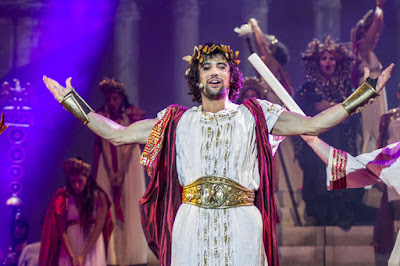 “There’s the growing idea that the only way to connect with our historical patrimony is to bring it into the contemporary world through events with mass appeal,” said Tomaso Montanari, an art historian and leading cultural critic in Italy. “The country’s cultural patrimony should be outside logics of consumerism or marketing.”

But the producers of the show, which was created by a Who’s Who of mostly Italian Oscar and Grammy winners, counter that every precaution was taken to safeguard the site. And the rent for the space — 250,000 euro (around $280,000), with an additional 3 percent of all ticket sales — will help underfunded restorations.
“It took more than two years of work” with public officials and archaeologists to overcome stumbling blocks, said Jacopo Capanna, one of the producers. The production came under scrutiny after a Roman newspaper disclosed that public funds had been allocated toward the project. Mr. Capanna said the funds were venture capital financing that would be reimbursed.
“Judge the product,” he urged critics. “We all want to increase tourism to Rome, and this is one way to do it,” he said.
The biographical musical, which opened on Wednesday, is a mishmash — think Disney meets “House of Cards” meets History Channel. It challenges the mostly negative depictions of Nero relayed by Tacitus, Suetonius and Cassius Dio — ancient fake news, as it were — with the portrait of a more nuanced antihero, who was thwarted from pursuing what his heart really desired: a life declaiming poetry and song. 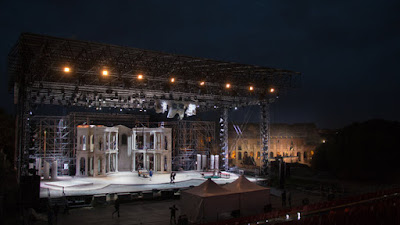 The stage is set for the rock musical about Nero. Credit Marta Coco
“He’s a bipolar Nero,” Giorgio Adamo, who plays the athletic and tuneful protagonist of the musical, explained at a news conference on Tuesday. “This Nero is very fresh, modern, he filters a pop-rock personality that anyone can understand.”
The performances are mostly sung in English, except on Saturdays, when they are sung in Italian.
Ernesto Migliacci, the production’s artistic director, suggested that Nero himself would have loved the idea of the musical on the Palatine. “In this case, pop means popular, for the people, and Nero was for the people,” he said. So the controversy over using the Palatine falls flat “when it comes to his mentality,” he added.
Despite the criticisms, Francesco Prosperetti, the superintendent of Rome’s archaeological sites, explained in the show’s program that events like the musical “enhanced the archaeological site,” and in this case drew people to an often neglected area of the Palatine, “making it attractive for visitors again.”
But the event hasn’t made life very attractive for a small group of nuns who live in the convent of Saint Sebastian at the Palatine, which abuts (and is overshadowed by) the stage, who have put up with a month’s worth of rehearsals.
“It’s impossible not to hear,” said Sister Rosalba, the mother superior here, who confessed, nonetheless, that she found some tunes catchy.
Musical considerations aside, Sister Rosalba said that she was concerned that the loud music might be having an impact on the ancient convent. “The windows certainly vibrate,” she said. “It’s not our style to fight back, but I wish there had been some dialogue,” she added, noting that she had not been informed that the musical would be staged in the Palatine. “This is a beautiful space, and we need to conserve it.”