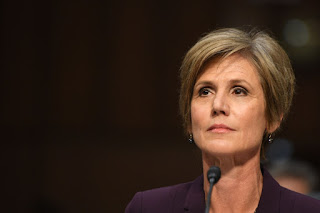 Sally Q. Yates served in the Justice Department from 1989 to 2017 as an assistant U.S. attorney, U.S. attorney, deputy attorney general and, briefly this year, as acting attorney general.
In today’s polarized world, there aren’t many issues on which Democrats and Republicans agree. So when they do, we should seize the rare opportunity to move our country forward. One such issue is criminal-justice reform, and specifically the need for sentencing reform for drug offenses.
All across the political spectrum, in red states and blue states, from Sen. John Cornyn (R-Tex.) and the Koch brothers to Sen. Patrick Leahy (D-Vt.) and the American Civil Liberties Union, there is broad consensus that the “lock them all up and throw away the key” approach embodied in mandatory minimum drug sentences is counterproductive, negatively affecting our ability to assure the safety of our communities.

But last month, Attorney General Jeff Sessions rolled back the clock to the 1980s, reinstating the harsh, indiscriminate use of mandatory minimum drug sentences imposed at the height of the crack epidemic. Sessions attempted to justify his directive in a Post op-ed last weekend, stoking fear by claiming that as a result of then-Attorney General Eric H. Holder Jr.’s Smart on Crime policy, the United States is gripped by a rising epidemic of violent crime that can only be cured by putting more drug offenders in jail for more time.