For the first time in its more than 60-year history, documenta, the world's most important contemporary art exhibition, is taking place at two locations: in Kassel and in Athens. Its slogan is: Learning from Athens!
But what can you actually learn from Athens? From a city trapped between frustration and despair, paralysis and rage? From a city that needs so much and is now getting a major exhibition from Germany? 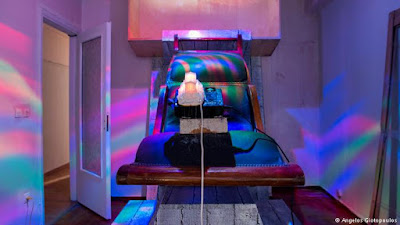 Curator Adam Szymzcyk wants to shine a light on an increasingly complex world from different angles: from Kassel in West Germany – the “rich north” - and from Athens in the crisis-ridden south, the most exciting place he knows right now.
And indeed: Nowhere else are the great challenges facing Europe clashing head-on to the extent they are in the Greek metropolis. For eight years, the inhabitants have been ground down by the economic crisis and the government’s strict austerity policies. The state is vastly overstretched. And this is the place where an art exhibition is supposed to set new energies free?
So does Athens really need documenta? And does documenta really need Athens? Our documentary immerses itself in the Greek capital, its changing history and its complicated present, asks questions about the hopes engendered by the exhibition and looks at the risks inherent in a project like this – in a place more famous for its ancient ruins than for its contemporary art. We talk to the people behind documenta, to politicians and to people from the independent art scene who are responding to the crisis with surprising creativity and even standing up for the refugees flooding the city.
For 100 days, Athens will host documenta – but art isn’t the only theme of this event. This world exhibition also wants to take on the great crises of this age – war, displacement, exploitation and colonialism.
What is the point of art in these turbulent times? Will documenta really succeed in breathing new life into the city of Athens, opening up new perspectives? What will be left when the art caravan moves on after 100 days? Each artist has his own answer. The 14th documenta will be more than just an art exhibition – it will be a seismograph of our times.