"You are only as good as the people you dress."

"This is a story of a self-made man who rose from
the amber prairies to the glittering heights of success
in Manhattan. Along the way he created a uniquely
American definition of chic that remains relevant
to this day - one of simplicity made elegant.
He was the first superstar American designer."
- Lesley Frowick,
Halston: Inventing American Fashion

The first comprehensive retrospective of the work of the American fashion designer Halston will be presented from Saturday, March 25 through Sunday, July 9, 2017. Sponsored by "H Halston exclusively at Lord & Taylor" and occupying the entire Museum, the exhibition Halston Style is organized by Guest Curator Lesley Frowick, Halston's niece and confidant. Lesley Frowick is author of the deluxe Rizzoli publication Halston: Inventing American Fashion that serves as the exhibition catalogue.
Focusing on the life and art of Roy Halston Frowick, better known as the self-crafted name of distinction, Halston, the exhibition includes many never-before-seen objects from the designer's personal archives. Halston left these original materials to Lesley Frowick's care, with the directive to use them to tell the story of the designer's career and lifestyle. 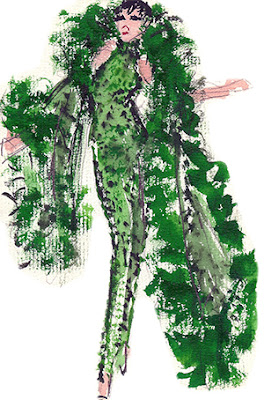 Halston Style includes more than 60 Halston fashions, juxtaposed with photographs, artwork, illustrations and accessories, as well as film and video documentation. Among the highlights of the exhibition are Halston's iconic pillbox hat design, made famous by Jacqueline Kennedy in 1961, and also his innovative Ultrasuede shirtdress garment. Masterful examples of the designer's classic gown silhouettes are abundantly on view.

Galleries within the exhibition focus on different milestones of Halston's career, such as his early work within the elegant Hat Salon at Bergdorf Goodman in New York City. Designs that used innovative fabrics - such as hand-painted silks, comfortable cashmeres and the newly-developed Ultrasuede - are complemented by working sketches drawn by Halston himself or his design assistant Steven Sprouse and the fashion illustrator Joe Eula.

Other sections within the exhibition are devoted to Halston's collaborations with artistic contemporaries. Elsa Peretti designed the classic Halston fragrance bottle and the elegant jewelry chosen by the designer to accessorize and accompany his garments. The photographer Hiro produced much of the imagery employed to market, advertise and promote the Halston brand. Halston designed numerous costumes for dances choreographed by the legendary Martha Graham. Cosmetic ads, fabric designs and other surprises emerged from the designer's close friendship and association with Pop artist Andy Warhol.
Halston designed for many celebrated American women, among them First Ladies Jacqueline Kennedy and Betty Ford. He also was a favorite of several top actresses and performers, including Elizabeth Taylor and Lauren Bacall. But most notable was his close association with Liza Minnelli. Having designed the gown she wore when accepting the Oscar for Cabaret, he went on to design her costumes for film and stage, finally becoming Minnelli's exclusive designer.

Halston's life and style became the last word in glamour. His personal appearance was captured by a generation of photographers, while his home and office surroundings conveyed discerning tastes in modern and contemporary art. Halston and his celebrity companions were regular visitors to the infamous Studio 54 during its heyday from 1977 to 1979, when it was ground zero for the disco scene's razzle-dazzle melding of music, nightlife and fashion.
With a deep affection for his country and sense of patriotism, Halston supported American institutions and businesses. He was a trailblazer in commercial licensing endeavors, designing not only an affordable line of clothing for J.C. Penny, but also uniforms for the Girl Scouts and the U.S. Olympic team.

ABOUT LORD & TAYLOR
Founded in 1826, Lord & Taylor is the oldest department store in the United States and one of the country's premier retailers. It has built its reputation on offering high-quality fashion apparel and accessories, exciting store environments, and seamless service. Lord & Taylor operates 50 full-line locations primarily in the northeastern and mid-Atlantic U.S., and lordandtaylor.com. It is part of the Hudson's Bay Company brand portfolio.