WHY SALZBURG IS A MUST-VISIT FOR CLASSICAL MUSIC 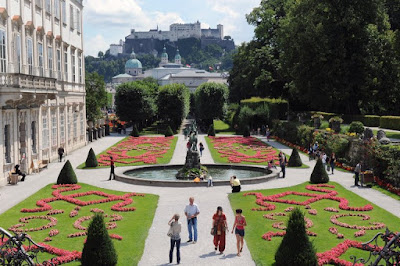 Tourists in 2011 visited Mirabell Gardens in Salzburg, Austria, the birthplace of Wolfgang Amadeus Mozart and the home of the famed Salzburg Festival of classical music. Credit Martin Schalk/Getty Images

SALZBURG, Austria — It has long been said that Austrians in general and Salzburgers specifically simply do not understand the obsession with the Oscar-winning film and Broadway musical “The Sound of Music,” which is set in Salzburg around the time of the Anschluss in 1938.
One in three Japanese tourists who come to the city have seen the film, according to Tourism Salzburg, while 75 percent of all American visitors (numbering about 230,000 in 2016) are here in part to retrace the footsteps of the novice nun who brings music to a family of motherless children.
But it was a different scene on the evening of May 1, when the tourists were outnumbered by Germans and Austrians — many of whom were dressed for May Day celebrations in traditional lederhosen and dirndl smocks — filling almost every seat here at the Landestheater for the German-translated production of the beloved musical.
By the time Captain von Trapp, played by the singing star Uwe Kröger of Germany, invited the audience to join in singing the English version of “Edelweiss” during the curtain call, many audience members were wiping away tears.
“At the beginning there were more tourists than locals,” Veronika Puttinger, the head of news media for the theater, wrote in an email. “Now it is the other way around.”
“The Sound of Music” is just one part of Salzburg’s rich music history. The city is also the birthplace of Wolfgang Amadeus Mozart and the home of the Salzburg Festival, one of the largest classical musical festivals in the world, which has taken place every summer since its founding in 1920.
Salzburg also holds a number of other musical festivals throughout the year, including the Mozart Festival in January and the weeklong Salzburg Easter Festival. The Salzburg Whitsun Festival, founded in 1973, will be held this year from June 2 to 5.
Cecilia Bartoli, the Italian mezzo-soprano, celebrates six years as the Whitsun Festival’s artistic director this year, and the programming will include a concert by the celebrated German violinist Anne-Sophie Mutter, Handel’s opera “Ariodante” and a performance of the ballet “La Sylphide.” “Cecilia Bartoli has brought new clients and people into the festival,” said Herbert Brugger, the managing director of Tourism Salzburg. “She is doing a good job.”
The city is also the birthplace of the Whitsun Festival founder Herbert von Karajan — the conductor of the Berlin Philharmonic for 35 years who is considered one of the most important conductors of the 20th century — and Joseph Mohr, who wrote the lyrics to the Christmas classic “Silent Night.”
Clive Gillinson, the executive and artistic director of Carnegie Hall, said in an email that Salzburg has become a magnet for all of the world’s greatest performers. “Not only does every great artist and ensemble want to perform there,” he wrote, “but it also offers an unrivalled experience for audiences, both in terms of the musical offerings throughout the [Salzburg] festival, but also the sheer beauty and history of the city and its extraordinary environment.”
Salzburg, once rich in both salt and gold, was run by archbishops as an ecclesiastical principality of the Holy Roman Empire until the early 19th century. According to Helga Rabl-Stadler, the president of the Salzburg Festival, the first opera performance north of the Alps — a work by Monteverdi — was held in 1617 in Salzburg on the invitation of the archbishop. 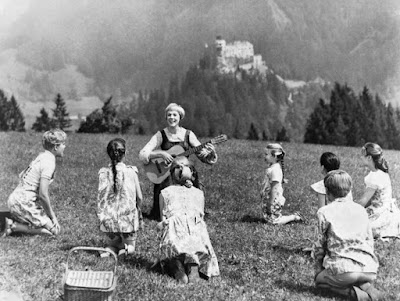 Julie Andrews sings the role of Maria von Trapp in the 1965 movie musical “The Sound of Music,” set in Salzburg, Austria, the birthplace of Wolfgang Amadeus Mozart. The film is widely popular among Japanese and American visitors to the city, according to Tourism Salzburg. Credit Bettmann, via Getty Images

Mozart was born in 1756 and lived in the city until age 25, when he left after a falling out with the reigning archbishop. Though he never returned to live in Salzburg, in 1841 the Mozarteum Orchestra Salzburg was formed with the help of his two sons, and a monument to him was erected the next year in what is now Mozart Square.
A century ago, Max Reinhardt, the Baden-born theater and film director, along with the composer Richard Strauss and Hugo von Hofmannsthal, decided to create a festival that they hoped would help bring together people from across Europe who were at war.
The Salzburg Festival was inaugurated in 1920 with a performance of Mr. von Hofmannsthal’s play “Jedermann” (“Everyman”), which has been performed annually at the festival except from 1922 to 1925 and from 1938 to 1946. In “The Sound of Music,” the festival served as a backdrop for how the von Trapps were able to escape the Nazis after winning a singing contest held in the Felsenreitschule Theater, which is still used as one of the three main festival sites.
The actual home of the von Trapps is now a bed and breakfast — Villa Trapp — run by two married former journalists. In July they will open a permanent exhibit, “The Sound of Music World,” in the center of the city that will focus on telling the true story of the von Trapps, their lives, the history of the house (it was Heinrich Himmler’s Salzburg residence during the war) and their eventual escape from the city.
The German-translated version of the musical celebrated its 100th performance in May (it opened in 2011) and is already lined up for next season. “Carl Philip von Maldeghem, the [Landestheater] artistic director, had an idea for this show and was convinced that it belongs in Salzburg,” Ms. Puttinger wrote, adding, “The idea was to create a musical with a European perspective and political authenticity.”
Though Mr. Reinhardt — who was Jewish and owned the magnificent rococo palace Schloss Leopoldskron that was also used as a backdrop in “The Sound of Music” — died in exile in New York in 1943, the Salzburg Festival continued to be a place of reconciliation.
“When we surrendered in 1945, General Mark W. Clark said that we should re-establish the festival because with the help of culture and arts, we can re-establish the democratic system,” Ms. Rabl-Stadler said, paraphrasing the general’s sentiments.
Those political connections between the arts and Salzburg still exist; the Schloss Leopoldskron, which during World War II was used by the Nazis as a summer residence, was sold by Mr. Reinhardt’s widow to three Harvard graduates in 1959. It is not only a high-end hotel but is also the headquarters for Salzburg Global Seminar, a nonprofit organization that hosts programs on a number of global topics, like geopolitics and health care.
During the summer, productions from both the Landestheater and the Salzburg Festival are often performed on the grounds of the lakeside property.
The festival stays true to its roots. This year it includes a staging of Harold Pinter’s dark comedy “The Birthday Party”; Giuseppe Verdi’s “Aida,” directed by Iranian filmmaker, photographer and video artist Shirin Neshat; and “Wozzeck,” directed by the South African artist William Kentridge with the Russian conductor Vladimir Jurowski leading the Vienna Philharmonic.
“Every single Mozart opera is about reconciliation and trying to reach across a divide of violence,” said Peter Sellars, the American theater director who is staging Mozart’s “La Clemenza di Tito” during the Salzburg Festival.
He added that his production will examine how people can live together during times of conflict. “It is in these crucial moments, Salzburg is a place where you can get people’s undivided attention for something that is going to have impact,” he said. “That is something special about Salzburg.”