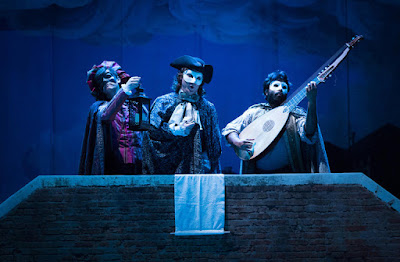 BOSTON — So how did the biennial Boston Early Music Festival, which ended on Sunday, celebrate this year’s big anniversary, the 450th birthday of Claudio Monteverdi? Having stolen a march on the field in 2015 with productions of all three of Monteverdi’s surviving operas, as well as a performance of his 1610 Vespers, it mostly ignored the occasion, featuring instead two operatic larks.
The centerpiece was André Campra’s “Le Carnaval de Venise” (1699) in a lavish staging by Gilbert Blin, the festival’s opera director, at the Cutler Majestic Theater at Emerson College here, on Friday evening in its final performance. And on Saturday there was a chamber-opera production by Mr. Blin at the New England Conservatory, an interleaving of two intermezzos by Giovanni Battista Pergolesi, the familiar “La Serva Padrona” (“The Servant Turned Mistress,” 1733) and the little-known “Livietta e Tracollo” (1734), which will be repeated as postscripts on Saturday evening and Sunday afternoon at the Mahaiwe Performing Arts Center in Great Barrington, Mass.
In Campra’s ballet-laden comédie lyrique “Le Carnaval de Venise,” a sort of opera-within-an-opera within an opera, the composer himself supplied the mayhem. In an elaborate Prologue, Minerve and her fellow divinities hurry along the preparation of a show to be presented for “a new holiday,” the Carnival in Venice. That entertainment, in three acts, traces the shifting fortunes of four would-be lovers during Carnival and culminates in the performance of yet another little opera, depicting Orpheus in the underworld. The hodgepodge ends in a ball, complete with commedia dell’arte figures.
In the Pergolesi presentation, Mr. Blin sowed mirthful confusion by combining the two operas, segment by segment, as if the score pages had been dropped and shuffled in the retrieval, as enacted onstage. The notion was not so far removed from the origins of the two works, conceived as comic intermezzos to be presented during breaks of larger serious operas. But here the works increasingly blended, with characters straying from one to the other or loitering onstage, and the two casts joined to end each of the two acts.
To a listener skeptical that anything coherent might emerge from either mélange, each proved an absolute delight. They largely shared a single creative team: in addition to Mr. Blin, Kathleen Fay, the festival’s executive director, as executive producer; Anna Watkins, costume designer; and Melinda Sullivan, dance director and movement coordinator.
They also shared many of the same hard-working performers, led by Stephen Stubbs and Paul O’Dette, lutenists, and Robert Mealy, concertmaster. Amanda Forsythe, a stalwart festival soprano, took lead roles brilliantly, as the love-struck Isabelle in “Carnaval” and the conniving servant girl Serpina in “La Serva Padrona.”
Other singers doing significant double duty were Jesse Blumberg, as Isabelle’s Léandre and, hilariously, the bumbling thief Tracollo; and Douglas Williams as Léandre’s rival, Rodolphe, and Serpina’s puffed-up master, Uberto. Mireille Lebel was an excellent Minerve, and Aaron Sheehan and Teresa Wakim were wildly entertaining as Orfeo and a Happy Shade in a sendup of the tragic tale with just the right edge of camp. 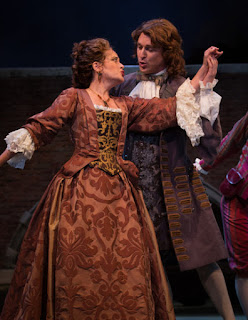 Caroline Copeland was a welcome omnipresence as choreographer and dancer in “Carnaval” and as a mute gadabout, Fulvio, in the Pergolesi, holding the stage with her antics before the performance and at intermission as well. Ms. Watkins’s costumes were wonderful, especially in the Campra’s underworld scene.
Some “Carnaval” singers also doubled in an excellent performance of Handel’s early oratorio “La Resurrezione” on Thursday evening at the New England Conservatory: Ms. Wakim as Mary Magdalene, Mr. Sheehan as St. John, Karina Gauvin as the Angel and Christian Immler (a devilish Plutone in Campra’s underworld) as Lucifer.
Mr. Mealy everywhere led the fine Boston Early Music Festival Orchestra with spirit and drive, essentially acting as conductor, though Mr. Stubbs took the lead from harpsichord and lute in “La Resurrezione.”………………………