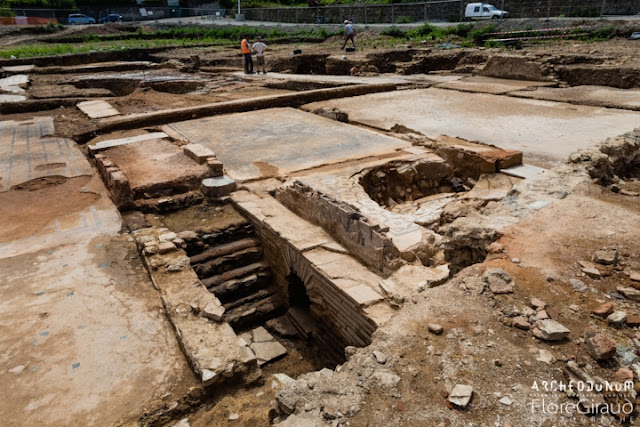 The site in Vienne, a major provincial capital of the Roman empire, covers some 75,000 square feet and includes a public square, private homes, and a school.
Benjamin Sutton
Aerial view of the Roman dig site in Vienne (photo courtesy Archeodunum)
Archaeologists in the city of Vienne in southern France have uncovered an entire ancient Roman neighborhood, including elegant private homes, a large public market square, and artisans’ workshops, some of which date back to the first century CE. The public square gave way to a large school of rhetoric or philosophy after a devastating fire ravaged the district in the early second century, leading the archaeologists to dub it “a veritable little Pompeii.” The district was largely abandoned in the fourth century, but its buildings and mosaics have remained in remarkably good condition. 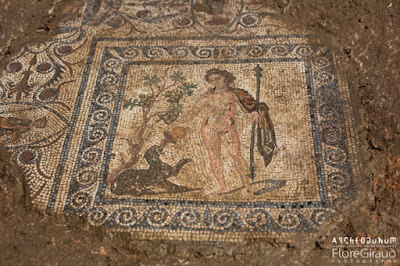 While exquisite Roman mosaics such as those discovered in Vienne are found occasionally, they are rarely set within such vast and well-preserved urban complexes. “We’re unbelievably lucky,” Benjamin Clement, the lead archaeologist at the site, told the  AFP. “This is undoubtedly the most exceptional excavation of a Roman site in 40 or 50 years.”
The site covers some 75,000 square feet. It is bordered by the Rhône river on the east and the Via Agrippa — the network of roads built by the Roman consul Marcus Vipsanius Agrippa around 10 BCE — on the west, is being excavated by Archeodunum, a preventative archaeology firm, ahead of a planned residential real estate development. The dig, begun in April and originally scheduled to wrap up in the fall, has been extended through December and classified an “exceptional discovery” by the French Ministry of Culture. 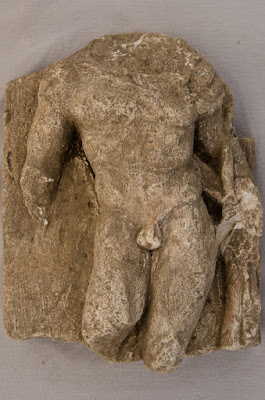 “The developers plan to integrate images and objects into the lobbies of the buildings,” Clement told Hyperallergic. “There are also discussions underway about integrating the park at the center of the site into the complex.”
According to Archeodunum, the school built at the site included some 30 rooms, including about 20 that had marble and mosaic floors, as well as a monumental fountain. One room, an office, features an elaborate mosaic whose central panel depicts the abduction of Thalia, muse of comedy, by Pan. At the northern edge of the site, an aristocratic home that collapsed in the district’s devastating fire has been remarkably well preserved. Its triclinium, or dining room, includes a first-century mosaic floor that features 15 scenes from various bacchanalia.
Vienne was an important Roman city along the route between Gaul to the north and the Roman province of Gallia Narbonensis to the south. It features a major theater, built in the 1st century CE, as well as a number of other ancient Roman ruins and monuments, as well as a Gallo-Roman Museum built on a vast archaeological site just north of the newly discovered neighborhood.