Scott Sandell
One hundred years ago, the United States entered World War I, the first Pulitzer Prizes were awarded, and Mary Pickford and Charlie Chaplin were among those who ruled the silent silver screen. 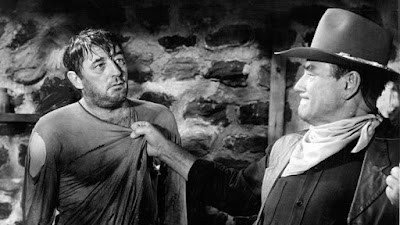 On Aug. 6, 1917, Robert Charles Duran Mitchum was born, the son of an Irish-Scottish railroad worker and a Norwegian-born mother, in Bridgeport, Conn. Or so we believe, considering that he once gave three places of birth in three interviews in the 1970s.

That was Robert Mitchum.

Welcome to the latest edition of the Classic Hollywood newsletter. I’m Scott Sandell, and this week we’re looking back at the centenary of an actor who lived on his own terms and frequently made them up as he went along. 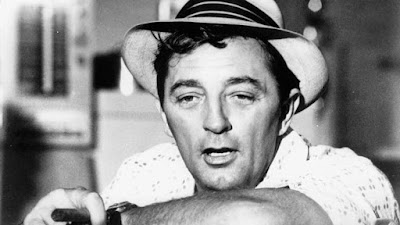 Robert Mitchum in the 1962 film "Cape Fear." (Universal Pictures)
When Mitchum died in 1997, the L.A. Times’ obituary called him “filmdom's monosyllabic, devil-may-care tough guy whose lizard-lidded eyelids seemed to be forever looking down on a world he found both amusing and profane.” And that was just from the opening paragraph of a colorfully written story that is attributed only to “a Times staff writer.”

The story went on to note: “Over the years he continued to waver between the wildness of his youth and the somnolent success of his middle years, sometimes existing on a diet of tequila and milk, other times wrapping himself in the love of his family, where he judged himself ‘a poor husband and a good father.’ ”
The married Mitchum, of course, became infamous when he was arrested in 1948 for smoking marijuana with a starlet in her Los Angeles apartment, a scandal that seemed bound to doom him. Instead, after two months behind bars, he reconciled with his wife and found that his stardom had only grown.
Given Mitchum’s propensity to ad-lib the truth and use many still-unprintable words, it made for some colorful interviews.
My colleague Kevin Crust put together some of Mitchum’s best quotes that were printed in The Times over several decades.

In 1947, he told an interviewer: “When I was a child, I didn’t want to be a cop, a fireman or railroad engineer when I grew up. I wanted to be a burglar. That’s a fact. I never quite realized my ambition, but when I first started raking in movie and radio money I thought that I was on my way. But after doing seven pictures last year I ended up with exactly $2,200. Now I’m wondering who burglarized who.”
In 1957: “Every now and then some hooligan swaggers up to me in a bar and says: ‘No so-and-so of an actor can outfight me.’ When they’re too persistent, you have to show ’em.”
And in 1970: “I don’t like calluses. … I just clock in and clock out. That’s the extent of it. I just look at the contract and see how many days off I get.”
There’s a lot more from Mitchum about acting, life and even the United States’ role in world affairs here.
Speaking of quotables, Crust also put together a look at how L.A. Times critics reviewed some of Mitchum’s best-known roles, including “The Night of the Hunter,” “Heaven Knows, Mr. Allison” and “Thunder Road.”
Of his performance in 1968’s “El Dorado,” The Times’ inimitable Kevin Thomas wrote: “Mitchum delivered one of the loveliest hangover sequences on record.”

100 YEARS MORE
Four months after Mitchum’s birth and an ocean away, Jean-Pierre Melville was born in Paris on Oct. 20, 1917.
As film critic Kenneth Turan writes, the director’s surname at birth was Grumbach, but he changed it to Melville “because he greatly admired America, its movies and the author of ‘Moby-Dick’ in particular.” Though he was thoroughly French, he often wore a Stetson hat to boot.

Melville, who was a French Resistance hero during World War II, often set his films about moral dilemmas against that backdrop. 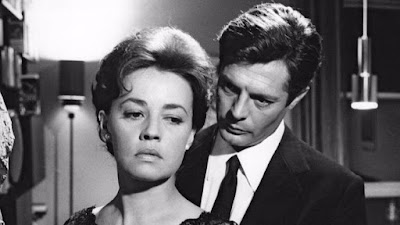 Jean-Paul Belmondo as a two-faced informer caught between the police and an old pal in Jean-Pierre Melville's "Le Doulos" ("The Fingerman") from 1962. (American Cinematheque)
The American Cinematheque's Egyptian Theatre in Hollywood begins its retrospective on Melville’s life and work Aug. 4, and his nephew, Remy Grumbach, will introduce many of the selections running through Aug. 13.

— Sam Shepard, the Pulitzer Prize-winning playwright and Oscar-nominated actor, has died at age 73. Times theater critic Charles McNulty called him America’s best dramatist since Tenessee Williams, while film critic Justin Chang remembered how Shepard turned understatement into brooding poetry on screen.
-- Jeanne Moreau, the legendary French actress and star of “Jules and Jim,” has died at age 89. Times film critic Kenneth Turan had a particularly personal tribute to Moreau, whom he used to visit in France.
-- Marty Sklar, a pioneering Imagineer who channeled Walt Disney, has died at age 83. My colleague and big-time Disney aficionado Todd Martens spent many hours conversing with Sklar and found himself being asked nearly as many questions as he posed of the master.

In August 1963, the L.A. Times got this shot of Disneyland maintenance worker Larry Kleser refueling the fleet of “atomic” submarines used on the Submarine Voyage ride, which had opened in 1959. (When Disneyland contemplated shutting down the ride in the late ’90s, Sklar threatened to lie in the street in protest.)
IN CASE YOU MISSED IT

— The Kennedy Center Honors will go to Gloria Estefan, LL Cool J, Carmen de Lavallade, Norman Lear and Lionel Richie.
— Carol Burnett will return to television with “A Little Help With Carol Burnett,” a Netflix original unscripted series that pairs Burnett with children to tackle life's dilemmas.
— Much has changed since Garth Brooks ruled the roost, but his concert at the Forum showed his attitude and energy haven’t. Pop music writer Randy Lewis was there.
— What does Steven Spielberg geek out over? Billy Wilder’s Oscar-nominated 1957 drama “Witness for the Prosecution.” And if you ever meet Spielberg, ask him about his high score playing the video game “Missile Command” while on the set of “E.T.”