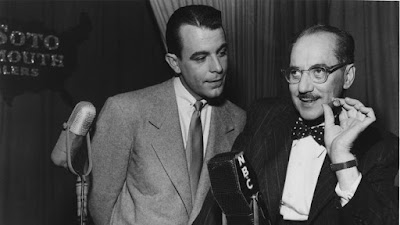 Groucho Marx, right, and George Fenneman on "You Bet Your Life." (NBC)

Groucho Marx, whose twitching eyebrows, flicking cigar and quick-witted irreverence made him one of the world’s most enduring and revered funnymen, died Friday night at Cedars-Sinai Medical Center. He was 86.

Death came at 7:25 p.m. after a two-month weakening battle with pneumonitis, a normally mild form of pneumonia, according to a hospital spokesman.

Marx, whose distinctive brand of comedy spanned more than 65 years of vaudeville, films, radio and television, last entered the hospital on June 22, the day after he had been released on recovery from corrective hip surgery in March.

The comedian’s condition had been described as “fair” until Thursday, when Marx appeared to worsen and his periods of unconsciousness became more frequent, hospital spokesman Larry Baum said.

A further deterioration of Marx’s condition was noted Friday morning when his vital signs were reported to be “unstable” and the  master showman was placed on the hospital’s “critical” list.

His son, Arthur, daughter-in-law, Lois, and grandson, Andrew, were by his side, another hospital spokesman, Robert Powell, said.

Erin Fleming, who had waged a bitter and much-publicized court battle in recent months against Arthur Marx for the conservatorship of the comedian’s estimated $2.8 million estate, also had been at Groucho’s bedside in the hours before his death.

However, Powell said Miss Fleming, 37, who had been Marx’s constant companion and personal manager during the last seven years, “had stepped outside the room a few minutes” before death came.

Earlier, Miss Fleming had told the Associated Press by telephone:

“He’s just going to have a nap and rest his eyes for the next several centuries.”

An eye-rolling, moustachioed comic with a lope, a leer and an inevitable cigar, Julius Henry Marx, his real name, was a master of the ad-lib, the squelch, the snappy comeback.

With his brothers, he made 14 films which have become comedy classics. Together, they made an art form of zaniness.

But perhaps Groucho’s greatest fame came as emcee of the radio and television quiz show You Bet Your Life in which the quiz was a kind of afterthought to the comedian’s tart and biting wit as he wisecracked with contestants and the show’ straight man-announcer, George Fenneman.

Born Oct. 2, 1890, in New York City, Marx was the third of five sons of Jewish immigrants. His father, Sam, was a poor, struggling East Side tailor who lived to be 101. His mother, Minnie, was the daughter of a wandering magician and sister of Al Shean of the famous Gallagher and Shean vaudeville team.

Minnie Marx had show business in her blood and, despite the family’s poverty, she managed to save enough to give the boys music lessons.

Groucho wrote in his memoirs that he originally wanted to be a doctor. But apparently his lack of education—he never finished grammar school—and the lure of the life of a vaudevillean changed his mind.

His first venture into show business came in 1905 when he landed a $4-a-week singing job with a trio that later left him stranded in Colorado.

His mother then organized a singing troupe which eventually came to consist entirely of her sons Chico (Leonard), Harpo (Arthur), Zeppo (Herbert) and Groucho.

But the fleeting nature of the adolescent male voice prompted a change from song to a loosely structured comedy act, which played in many tank towns before the brothers struck success.

“I always had a real fear of poverty,” Groucho said as a wealthy man in his 80s. “It came from years of living in boarding houses, bad hotels, bum clothes and cheap shoes.”

But all that began to change in 1919 when the Marx Brothers took their act to the Palace Theatre in New York, the citadel of big-time vaudeville.

They were a hit in New York and later took their act to Europe. When they returned, the brothers had three straight successes in Broadway musical comedies.

In those plays the zany characters who soon would delight movie fans were formed, with Groucho as the quick-quipping charlatan. In fact, he ad-libbed so much that playwright George S. Kaufman, who wrote one of the musicals, once scolded a fellow theatergoer to silence, saying “I think I just heard one of the original lines.”

With the coming of talkies, Hollywood turned to Broadway for comics who both looked and talked funny. 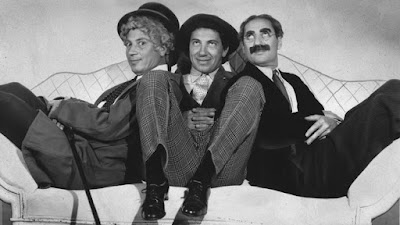 The first two of the brothers’ mad-cap films—“The Cocoanuts” (1929) and “Animal Crackers” (1930)—were adaptations of their Broadway hits.

The Marx Brothers’ movies were essentially filmed vaudeville shows but with more enduring lines, most of them emanating from Groucho. Thus, when a woman in “A Day at the Races” said she had never been so insulted in her life, Groucho would tell her: “Don’t worry, it’s early yet.”
Harpo, Chico and Groucho in "A Night at the Opera." (File photo)
Groucho, Harpo and Chico (Zeppo dropped out in 1933 and Gummo, whose real name was Milton, never was in the movies) hit their cinematic stride in 1935 with “A Night at the Opera.” Their last movie was “Love Happy” in 1949.

The films were adversary comedies with the brothers as zany outsiders intent on deflating stuffed shirts and kicking sacred cows. Virtually every institution and sentiment was playfully debunked, and perhaps for that reason, those movies have won millions of college-age devotees in recent years.

“When we made the movies, we’d get no more than 10 or 12 letters a month. And most of those were threatening,” Groucho said a few years ago. “Now I get 100 letters a week.”

Groucho himself had always said one of his favorite characters was the lecherous Professor Hackenbush, the wise-cracker with stooped walk like a tiger stalking a water buffalo.

But, whatever his role, Groucho’s appeal was enduring. Testimony to that came during a May 6, 1972 concert, “An Evening With Groucho,” at Carnegie Hall in New York.

The first night’s performance was sold out the day it was announced—and more than 3,500 youths, many dressed as the various Marx Brothers, were turned away from the theater.

Groucho was considered the most creative comedian of the brothers. But a half dozen movies he made without them—one as recent as 1968—were undistinguished.

He had also done comedy and variety work in radio in the early days and in 1947, Groucho began as host of You Bet Your Life. The show began what was to become an 11-year run on television three years later.

The program, recipient of several radio and television awards, centered on Groucho’s often brash, if not abrasive, interviews with a succession of often improbable “contestants.”

True to form, Groucho usually managed to make his guests the foils for his quick wit and sometimes suggestive remarks, the comedian normally spending most of his interview time wisecracking—and eyebrow-wiggling—at the female member of the contestant-team.

The audience loved it and some of the show’s funniest moments came when Groucho, during a chat with a buxomy contestant, would turn to the crowd or camera and say nothing.

He didn’t have to. His eyebrows, leering sideways glance and flicking cigar said it for him.

Fenneman, now 57, told The Times shortly before Marx’s death that the two had maintained “what I believe is a very special friendship over the years.”

“But, one night when I was doing the commercial, Groucho interrupted me and started poking fun. From that time on, he sort of just pulled me more and more into the show. It wasn’t planned, so help me.”

The resulting humor between the two became a mainstay of the show.

Indeed, years later Groucho would give Fenneman what the former announcer says was the “ultimate compliment.”

Said Fenneman: “At a tribute to him a couple of years ago, he introduced me as ‘the perfect straight man, the kind a comedian looks for all his life.’ I’ll never forget that night or those words.”

Fenneman said he “was in total awe of Groucho” during their beginning years together . . . and, I guess I still am in awe of him a little bit.”

Fenneman, who had known the comedian for 30 years, said Groucho’s facial expression had undergone “a transformation” in the lingering months of his illness.

“His face had softened a great deal and had become serene, almost beatific.

Fenneman said he had been at the entertainer’s home one day after Groucho’s hip surgery and was carrying Marx from his wheelchair to his bed when the comic, in a tired but still witty voice said:

“Fenneman, you always were a lousy dancer.”

Again, for the record, did Fenneman and Groucho ever rehearse the comedic charisma that was apparent between the two on the program, which was filmed before a live audience?

“No, I swear, we never did. The only thing I did to get ready for You Bet Your Life was to take a deep breath, go on stage—and pray.”

In private life, Groucho was a voracious reader and a literate and articulate man who preferred to talk of books and sports rather than show business.

He always regretted his lack of schooling but took pride in the fact that he wrote six books.

He also collaborated on movie scripts and plays and carried on correspondence with such notables as T.S. Elliot, Harry S. Truman, and James Thurber. In 1965, Groucho’s letters were given to the Library of Congress.

Marx, who lived in Trousdale Estates, had been in failing health for several years.

Rafeedie also designated that the Bank of America continue as conservator of the comedian’s business interests and his estate.

At the time, after a brief session with Marx at the entertainer’s bedside. Rafeedie said Marx was “reasonably alert . . .  although he has had trouble speaking and gave only one-word answers to my questions.”

Marx, who had been married three times, was divorced from his first wife, Ruth Garrity, in 1943 after a 22-year marriage. They had two children, Arthur and Miriam.

He and his second wife, Kay Gorcey, were divorced in 1950. They had a daughter, Melinda.

Groucho was divorced from his third wife, Eden, in 1968.

Zeppo is the only one of the Marx brothers still living.

A few years ago in an interview, Groucho predicted: “My obituary will probably say, ‘Had been a moderately funny comedian.’ “

For once, Groucho seemingly had been caught in a moment of public modesty. For the Marx Brothers comedy team is considered by critics to rank among such masters of the art of laughter as Laurel and Hardy, Will Rogers, Charlie Chaplin and W.C. Fields.

Funeral arrangements were not immediately announced.