ELVIS IN THE HEART OF AMERICA 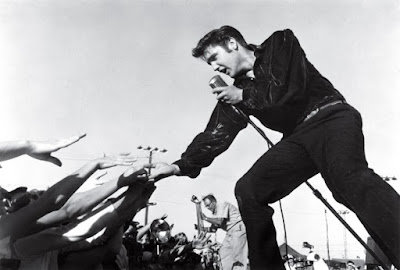 Considering the source, it was a startling claim. A longtime lieutenant of TIME and LIFE founder Henry Luce, journalist Richard Clurman found himself chatting one day in the late 1960s with Leonard Bernstein, the legendary composer and conductor of the New York Philharmonic. "Elvis Presley," Bernstein said, "is the greatest cultural force in the 20th century." Taken aback, Clurman, who recounted the exchange to the writer David Halberstam, offered an alternative.
"What about Picasso?" Clurman ventured.
"No, it's Elvis," Bernstein insisted. "He introduced the beat to everything and he changed everything--music, language, clothes, it's a whole new social revolution--the '60s come from it."
As does so much else. Forty years after Presley's August 1977 death in an upstairs bathroom at Graceland, his Memphis mansion, the revolution Bernstein identified unfolds still. With an estimated 1 billion units sold and counting, Presley is thought to be the most commercially successful solo musical artist of all time. Last year, the Recording Industry Association of America certified the Essential Elvis record platinum, and in 2016, Presley was, according to Forbes, the fourth top-earning dead celebrity in America, trailing only Michael Jackson (who, in an only-in-America twist, was once married to Presley's daughter), cartoonist Charles Schulz and golfer Arnold Palmer. Legions of fans--many of whom were born after the King was found lifeless, his body wracked by opioids--treat him as a Christ-like figure, a man born on the fringes who attracted a great following and who some still believe is not dead. The site this month of a panel discussion with Priscilla Presley, a sold-out "Ultimate Elvis Tribute Artist Contest Showcase" and a vigil on the anniversary of his death, Graceland is among the most-visited private homes in the nation along with the White House, which is fitting, since the Presley phenomenon has particular resonance in the age of Hillbilly Elegy. "What he did was earthshaking," says Tim McGraw, the country-music superstar who counts Presley as a huge influence. "He changed not only the music that we make but social norms and the way we looked at each other."
He also changed how we are able to look at, and experience, him in the 21st century. Ted Harrison, a British writer and broadcaster who's done landmark work on the Presley phenomenon, notes that investors in the "Elvis brand," thanks to the Presley family, have had unusual artistic and commercial freedom. Next up: a hologram Elvis that can carry an entire concert. "Elvis," Harrison says, "will continue to grow." Fans, it turns out, need never have a lonesome night.
The Presley legend has proved durable and intriguing not least because it mirrors much of American culture in the artist's lifetime and beyond. His fantastic rise and long, sad slide into an overweight, gun-toting, prescription-drug-abusing conspiracy theorist about communism and the counterculture (he hated the Beatles, once telling President Nixon that the British band threatened American values) tap into fundamental questions about race, mass culture, sexuality and working-class anxiety in a postwar America. A poor boy made good in the prosperous 1950s, Presley experienced tension and feared disorder in the 1960s before breaking down totally in the hectic 1970s. In his music and movies, in his private worlds at Graceland and in Las Vegas, Presley was a forerunner of the reality-TV era in which celebrities play an outsize role in the imaginative lives of their fans. Before Diana, before Michael, before Kim, before Trump, there was Elvis. 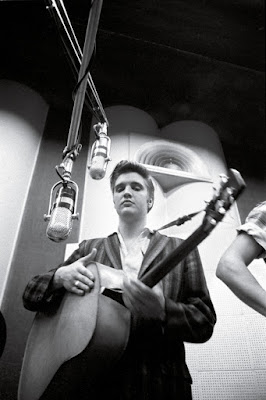 I. RISING SUN
Presley was born in Tupelo, Miss., in 1935 in the hilly upcountry region of the state that the writer Julia Reed has described as the Balkans of the South. (The other two distinct Mississippi worlds are the Delta and the Gulf Coast.) His father struggled to eke out a living, working different jobs and signing up for FDR's Works Progress Administration after doing time at Mississippi's Parchman prison for forging a check. His mother was devoted to her son, all the more so because Presley had had a twin brother who was stillborn. Presley grew up as a member of the Assembly of God, a denomination that emphasized personal religious experiences. Music and singing were essential means of creating ecstatic moments of transcendence: a vibrant, emotional, very public form of faith. The individual was the vessel of the Holy Spirit--a performer, if only for the congregation.
Eventually the family moved to Memphis, which was perfect for Presley. A longtime cotton hub, the city, like Presley himself, sat between the blues-soaked Delta and the virtually all-white country-and-western music world of Nashville. In the summer of 1954, after a brief, not-quite-successful visit the year before, Presley cut a record with the producer Sam Phillips, who ran Sun Records on Union Avenue.
A few weeks later, at an open-air performance at Overton Park Shell in Memphis, Presley played the two songs from that recording. As Joel Williamson, a scholar of Southern history, observed, Presley took "That's All Right" (written by an African-American blues musician, Arthur Crudup) and "Blue Moon of Kentucky" (written by a white bluegrass man, Bill Monroe) and made them his own. "Elvis, using his God-given rich and versatile voice, perfected by practice, gave [the songs] a different turn," Williamson wrote. "Just as 'That's All Right' was not black anymore, 'Blue Moon' was no longer hillbilly; it was joyous, country-come-to-town and damn glad to be there." The audience, led by ecstatic young women, went wild. "I was scared stiff," Presley recalled. "Everyone was hollering, and I didn't know what they were hollering at."
That much, at least, should have been clear: they were hollering at him, transported by his electric physicality and extraordinary voice, which ranged comfortably from baritone to tenor and above. He did not simply sing; he became the music, as though possessed by a spirit of joy and release back at the Assembly of God. It was sexual, yes, and thus disturbing to the more placid and puritanical observers, but it was inescapably religious too, in the sense that religion evokes realities ordinarily hidden from the human eye. Here, on a covered stage in a park in western Tennessee, a white man was drawing on the deep tradition of African-American blues. In the popular mind, a fresh genre--a different epoch--was emerging. "Before Elvis," John Lennon is said to have remarked, "there was nothing."
That was not strictly true. Presley was a vehicle--cultural critics would say he was basically a mimic, or even a thief--of the black musical and spiritual experiences of his native Mississippi. Phillips, the maestro of Sun Records who recorded artists such as B.B. King and Ike Turner in a still-segregated South, understood the underlying realities of Jim Crow America. Chuck Berry and Little Richard would be early breakout stars across the color line, but Phillips believed that would not be enough to integrate the cultural and commercial markets. "I knew that for black music to come to its rightful place in this country, we had to have some white singers come over and do black music--not copy it, not change, not sweeten it. Just do it," he said. With Presley's emergence (as well as Bill Haley's and Jerry Lee Lewis', among others), Phillips' prophecy came true, but not without resentment from the architects of the tradition Presley was drawing on. "I was making everybody rich, and I was poor," said Crudup, who originally recorded "That's All Right." "I was born poor, I live poor, and I'm going to die poor."
In the white mainstream, Presley's story was quintessentially American--a striver rising to riches from largely impoverished obscurity (his family lived in a federal housing project in Memphis after moving to Tennessee) on the strength of his talent, not on the circumstances of his birth. "I don't know what it is," Presley told the Saturday Evening Post in 1956. "I just fell into it, really. My daddy and I were laughing about it the other day. He looked at me and said, 'What happened, E? The last thing I can remember is I was working in a can factory and you were drivin' a truck' ... It just caught us up."
Presley emerged at the moment the machinery of post--World War II mass culture began to hum. The world was on the move; old barriers were under siege; new possibilities were opening up. It was the age of the GI Bill and Brown v. Board of Education, suburbs and television, interstate highways and fast food. Material prosperity in Eisenhower's America was startling. Families whose forebears had struggled on the fringes of farming and of debilitating manufacturing work suddenly had more money (and more things, ranging from TVs to washing machines) than they could have imagined two decades before, in the depths of an economic crash that seemed to go on forever. When John Maynard Keynes was asked whether there had ever been anything like the Great Depression, he had replied, "Yes. It was called the Dark Ages, and it lasted 400 years." One unexpected benefit from the postwar boom was rising disposable income. Teenagers were able to consume the product that Presley was offering.

A key element of that product: overt sexuality. This wasn't Bing Crosby up there; it wasn't even Frank Sinatra, who sang so intimately and so searchingly. Presley was something much different. Beyond his husky, unique voice, the artist, with his gyrating hips and hooded eyes, seemed to embody desire more than any other popular male performer of his time. One report in Presley's vast FBI file--created and maintained under the decades-long reign of J. Edgar Hoover--described a La Crosse, Wis., show in lurid terms. It was, the writer said, "the filthiest and most harmful production that ever came to La Crosse for exhibition to teenagers"; Presley projected nothing less than "sexual gratification on stage."
A white man singing traditionally black music; a young performer with sexual heat; a Southern kid going national: little wonder Presley struck so many as so refreshing in the mid-1950s. "Hearing him for the first time," said Bob Dylan, "was like busting out of jail." Many women, particularly young women, had a similar reaction………