THE TRICKSTER ARTIST BEHIND THE I SPY BOOKS

At the Lowe Art Museum, a retrospective dives into the mirrored mazes and optical illusions of Walter Wick, a photographer, illustrator, and children’s book author.
Monica Uszerowicz 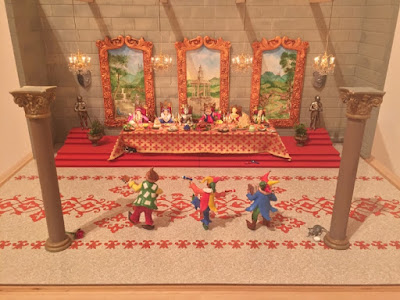 Walter Wick, model for “Entertaining the Guest” from Can You See What I See? Out of This World (2013) (all works part of the Collection of New Britain Museum of American Art, all photos by the author for Hyperallergic unless otherwise noted)

MIAMI — When I was young, I thought the famous I Spy books were designed purely for entertainment. Each book in the series, authored by Jean Marzollo and published by Scholastic Press, features photographs by Walter Wick of elaborately arranged objects, accompanied by instructions to locate specific items in the colorful morass. The images have a preternatural warmth, exquisitely lit and glowing. Every book has a theme — I Spy Christmas, I Spy School Days — and the first book (simply titled I Spy) contains several, with chapters like “Toys in the Attic” and “Make Believe.” Unaware that their purpose was ultimately educational, I treated them like contraband during classroom “reading time,” trying to find books large enough to cover them and pretend I was reading those instead. 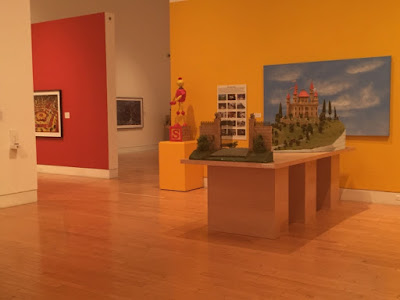 Walter Wick: Games, Gizmos, and Toys in the Attic installation view at the Lowe Art Museum

Walter Wick: Games, Gizmos, and Toys in the Attic, on view at the Lowe Art Museum (operated by the University of Miami), is a traveling retrospective of Wick’s career as a photographer, illustrator, and children’s book author. The show takes viewers from his early work as a student at the Paier College of Art and a puzzle-maker for Games Magazine, to his photos for I Spy and other books, including A Drop of Water: A Book of Science and Wonder and the Can You See What I See? series. Painted in ketchup and mustard colors, the exhibit also doubles as an educational space for kids, with placards directing young viewers to compare particular images or count the number of, say, real marbles in a mirrored maze of toys.
Wick still makes books for children, and it’s comforting to see that while he now shoots digitally (rather than on film), his approach remains largely unaltered, setting up intricate tableaux vivants of toys. Wick grew up in Connecticut, where he cultivated an early resourcefulness, repairing broken hand-me-down toys from his siblings and building skateboards for neighborhood children. He’s maintained this sense of play throughout his career — two early black-and-white photographs, “Goal Posts” and “Flooded Soccer Field” (1974), work like optical illusions, with the identical objects in the former appearing drastically different in size, and the water in the latter creating reflective images.
Wick would continue to create more tricks of the eye, at once fantastical and cerebral and totally mesmerizing. “Mirror Maze,” an image from I Spy Fun House, depicts several toy animals in a mirrored room, some emerging from archways that seemingly lead to nowhere. In “Crazy Columns,” a triumphal arch appears to have three columns, but only two actually emerge from the top. “The Amazing Mirror Maze” (sensing a theme?), which Wick submitted to Games before working for the publication full-time, features dolls in a mirrored labyrinth. It’s difficult to know which are real. 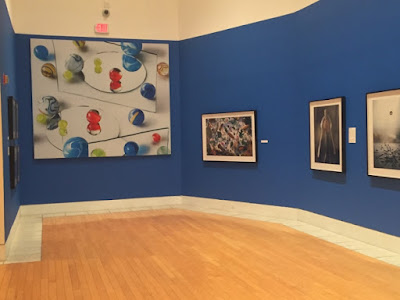 Walter Wick: Games, Gizmos, and Toys in the Attic, installation view at the Lowe Art Museum

Even when illusions aren’t part of the image, there’s a fun novelty to each photograph. In “Balancing Act,” created for the Kids Gallery of the Connecticut Science Center, Wick balanced 117 objects on a Lego block without any adhesive (stepping on a Lego is excruciating, so I’ve never doubted their strength). And the models used for his Can You See What I See? books are the exhibition’s most delightful components, with detailed dioramas of fairy-tale castles, haunted houses, and beach shacks presented alongside their accompanying photographs. Wick photographed and zoomed in on these models until everything tiny became massive, a child’s eye-view of a microcosmic world. In “Entertaining the Guest,” from Can You See What I See? Out of This World, jesters juggle and dance for seated royals. The accompanying model allows viewers to see details omitted from the photo; there’s even a button to switch on the dining hall lights.
What is it about very small versions of regular-sized objects that feels so charming? Though I was drawn to Christmas dioramas and Polly Pocket’s crumb-sized accessories as a kid, it’s not simply the whimsy of childhood that makes tiny things so attractive. Consider the Tiny Kitchen video series, this hamster eating a penny-sized burrito, or the work of miniature artists: there’s an explicable appeal, even for adults. Though it’s been attributed to creating the feeling of control — it’s easy to imagine oneself as the ruler of a pint-sized, self-contained kingdom — I don’t buy it.
While Wick’s photographs aren’t presented to scale — a plastic elephant grows to the size of a real one; a cardboard android, knee-high in reality, becomes a skyscraper in a robot city — the brain understands them as toys, diminutive pretend worlds presented up-close. To complicate them with illusion and games enables full, meditative immersion into these mini-universes. The desire for this sort of magical escape isn’t just confined to childhood. Indeed, at this exhibition, I lamented that “touching the art” was prohibited, mostly because I wished to jump inside it.
Walter Wick: Games, Gizmos and Toys in The Attic continues at University of Miami’s Lowe Art Museum (1301 Stanford Dr, Miami) through September 24.