5 MINUTES WITH... AN OIL SKETCH FOR THE DISTRIBUTION OF THE EAGLE STANDARDS BY JACQUES-LOUIS DAVID

Standing in front of an oil sketch from around 1810 depicting Napoleon I in a ceremony held on 5 December 1804, Christie’s Old Masters specialist Alan Wintermute explains that it would be tempting to call the work a missing link. ‘But if no one knew it existed,’ he adds, ‘I’m not sure it was ever missed.’

It was thought until recently that the evolution of Jacques-Louis David’s The Distribution of the Eagle Standards  was exhaustively documented. This modello, however — executed in oil on sheets of paper mounted on canvas — was only discovered in 2017. 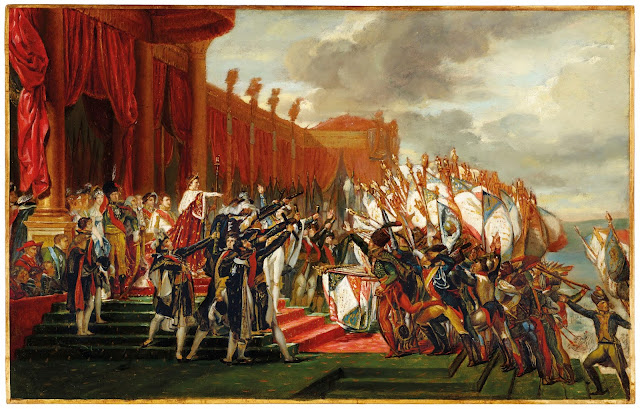 In 1801 Napoleon commissioned David, a staunch republican who had voted to guillotine Louis XVI, to paint the first of five portraits of him riding across the Alps on horseback (when in reality he had ridden a mule). Three years later, he requested four further paintings to commemorate his coronation as emperor. The Distribution of the Eagle Standards  was the second in this series following The Coronation.

‘Letters and receipts indicate that by the time David finished The Coronation  in 1808, he was ordered to start on the The Distribution of the Eagle Standards — perhaps because its militaristic tones would mobilise public support for the newly waged war for control of the Iberian Peninsula,’ explains Wintermute.

David completed the painting, which is more than 30 feet wide, in 1810. But just as he was readying it for the Salon, Napoleon’s Director-General of Museums, Dominique-Vivant Denon, visited David’s studio in Cluny to relay two significant problems.
‘The first was a winged allegory of victory dropping laurel petals from the heavens above the figures,’ says Wintermute. ‘Denon told David that Napoleon wanted these images to appear believable and to lose [the allegory].’

The second was the emperor’s wife. Napoleon had recently divorced the Empress Joséphine after she had failed to produce an heir, and had remarried. David locked himself in his studio for a month to paint her out, filling the space where she had sat by extending the leg of Eugène de Beauharnais — Joséphine’s son by her first marriage.

The presence of these two figures is well documented in other preparatory sketches, continues Wintermute, but the oil sketch offered at Christie’s on 1 May is the first piece of evidence for David’s experimentation with removing them after that visit from Denon.
When purchased at an auction in Paris in 2017, the oil sketch was covered in overpaint and dirt, and attributed to a copyist of the artist. The buyer had the picture examined by X-ray (above) and infrared reflectography, which revealed that under the top-most layer of paint both these figures were still present. ‘It confirmed that this was an original sketch by David, and that he removed the two characters and rethought his composition,’ states Wintermute.

The infrared reflectography scan (below) also revealed how many of the figures were originally painted nude, with clothes added later, as well as David’s scale grids and handwritten annotations. It is likely that this was the sketch that David showed to Denon to get approval for the changes to the final work before it was presented to the public.
‘It’s fascinating to watch the evolution of this work of art as you peel back the paint and see how the artist’s changes alter the dynamic movement of the picture,’ observes the specialist.

David worked tirelessly to make the changes, and the unveiling of the finished painting was delayed by just five days. Once the Salon closed, the painting was hung in the Tuileries Palace before being moved to Versailles, where it remains today.
As the political winds shifted in France, the third and fourth works in the series were cancelled, and David was only paid half the agreed amount for this work. ‘The picture ended up being the last ever commission he completed for the Emperor, which makes this sketch both important and collectible,’ Wintermute says. ‘It has been requested for the upcoming David exhibition at the Met in 2021, and is a highly significant piece of Napoleonica.’