INDIA: JEWELS THAT ENCHANTED THE WORLD


India: Jewels that Enchanted the World, the most comprehensive exhibition of Indian jewellery ever staged, will take place at the State Museums of Moscow Kremlin from 12 April to 27 July 2014.  The exhibition examines the legacy of five hundred years of Indian jewellery, from the 17th century to the present day.  More than 300 pieces of jewellery and jewelled objects generously loaned from over 30 museums, institutions and private collections from around the world are brought together for the first time to showcase the beauty of Indian craftsmanship, the magnificence of gemstone setting and the aesthetic refinement of Indian taste.  Many of the items have never been exhibited before.

Lenders to the exhibition include the al-Sabah Collection, the British Museum, the Doha Museum of Islamic Art, the Khalili Collection, the Musée Barbier-Mueller, and the Victoria and Albert Museum as well as the world’s greatest jewellery houses such as Cartier, Chaumet, Mauboussin and Van Cleef & Arpels.  The 21st century is represented by two of India’s leading jewellery houses – Munnu Kasliwal’s creations for The Gem Palace and Bhagat – both famous for their exquisite designs, fine craftsmanship and consummate glamour.

India: Jewels that Enchanted the World is the joint undertaking of the State Museums of Moscow Kremlin, headed by Dr Elena Gagarina, and the Indo-Russian Jewellery Foundation, founded by diamond and jewellery connoisseur Alex Popov.  The exhibition has been conceived by Dr Gagarina and Alex Popov who brought together scholars and enthusiasts from India, UK, Switzerland and the USA to realise this ambitious project.  Presented in two beautiful spaces, The Belfry and the One-Pillar Hall, the pieces are arranged thematically in sections relating to regions and periods, and according to typology and sources of inspiration.  For many centuries, the jewels and gemstones of India have stunned the world and this exhibition explores the history of this rich heritage and the continuity of design, artistic sensibility and craftsmanship.

In the first hall, visitors will encounter the jewellery tradition of South India: monumental pieces crafted from gold, worked in relief and decorated with beautiful flowers, dancing peacocks and exquisite gems showcase the distinctive forms and character of this region.  Sheet gold is worked in repoussée and transformed into magnificent jewels with a profusion of decorative designs, and gold is twisted into wires and formed into tiny granules to decorate the surface of necklaces. The jewels of the gods and goddesses are represented with splendid crowns sparkling with gems and hair jewels worked in minute detail with a profusion of imagery and floral motifs.  From head to toe, a wide variety of ornament types are represented.  Outstanding are: a hair ornament studded with cabochon rubies surmounted with the coiled body of a snake; a monumental gold marriage necklace of the Chettiar community of Tamil Nadu made up of elaborately detailed claw-like pendants; jewels for the ears; and exquisite temple pendants featuring images of gods and goddesses set with specially cut carved rubies. 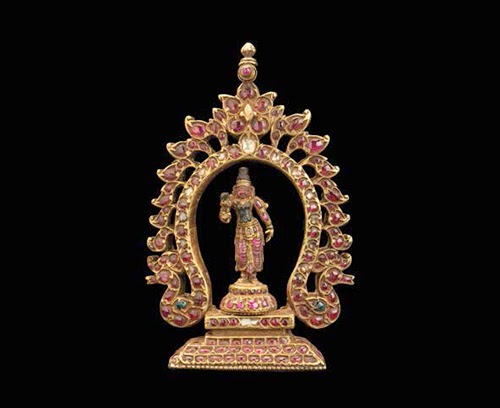 The next section is devoted to the jewelled splendour of the Mughal courts where gold, gems and enamel combine to reflect the artistic sensibilities of the Mughals who came as conquerors, ruled as emperors and, as connoisseurs, patronised art and architecture and flaunted their imperial power in the form of spectacular gems and jewels.  Turban jewels, emblems of sovereignty, sparkle with table-cut diamonds, while rigid collar-necklaces are studded with gems and cascade down the neck.  The genius of Mughal design and craftsmanship are illustrated by armbands set with diamonds, exquisitely enamelled bangles with animal-head terminals and a tiny box, set with 103 exquisitely carved emeralds.  A magnificent water pipe, made of gold and richly decorated with enamels reflects the sumptuousness of royal accoutrements.

The splendour of Indian stones is further highlighted in a special section devoted to the five great gems of Indian jewellery – diamonds, emeralds, rubies, sapphires and pearls.  The highlights are: an exceptional necklace comprising five outstandingly beautiful flat portrait diamonds; two pairs of spectacles, fitted with filters of diamonds and emeralds and which have never been exhibited before; and an exquisite baroque pearl pendant crafted in the image of the snake god. 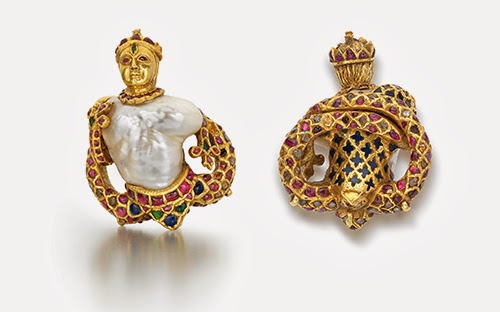 The magnificent gem-set jewels created for the Nizams of Hyderabad epitomise the opulence of the Mughal courts of the maharajas.  Elegant flower earrings, chokers studded with diamonds with exquisite enamelling and elaborate armbands provide a glimpse into the wealth and artistry of the Nizams’ court.  The concluding section in The Belfrey features the creations of Munnu Kasliwal for The Gem Palace.  Remaining faithful to the ancient heritage of India, Munnu’s jewels are grand, exotic and eclectic.  They include an entire suite of wedding jewels comprising a necklace, a headdress and a pair of earrings, all set with rose-cut diamonds and pearls.

The second hall illustrates the symbiosis between the European jewellery houses and India and the cross-cultural influences that occurred between Europe and India in the late 19th and early 20th centuries.  The grands joailliers such as Cartier, Chaumet, Mauboussin, Mellerio and Van Cleef & Arpels all turned to India for precious stones and inspiration.  The maharajas were their principal clients and for them they created an extraordinary genre of jewels combining Indian colour, motifs and forms with European elegance and techniques.  Cartier’s creations for their most esteemed client, Maharaja Bhupinder Singh of Patiala, consisted of an entire range of jewels and, featured in the exhibition, is a selection of original drawings on public view for the first time.   Cartier often incorporated carved Mughal emeralds into their jewellery and the beautiful necklace with three important Mughal emeralds, diamonds and sapphires embodies the idiom of the 1920s. 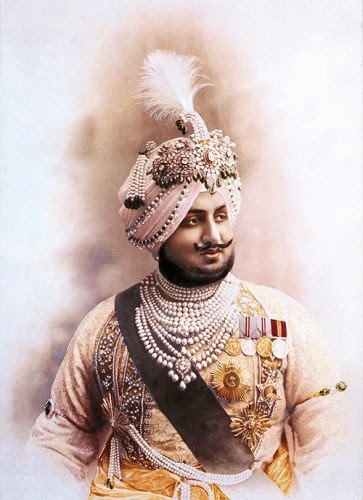 Chaumet’s drawings for the Indore Pear diamonds for Maharaja Yashwant Rao Holkar of Indore and their elegant pearl tassel creations illustrate the Indian influence on their designers.  A stunning clip set with diamonds, rubies, sapphires and emeralds by Van Cleef & Arpels transforms an Indian arm jewel into a turban ornament and Mellerio’s exquisite peacock aigrette set with diamonds and enamelled in blue and green once adorned the turban of the dashingly handsome Maharaja Jagatjit Singh of Kapurthala. 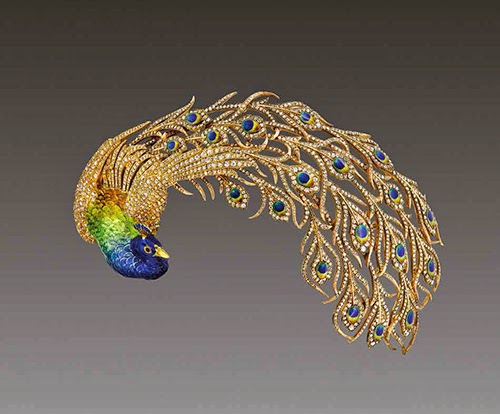 This section concludes with the sophisticated creations of Bhagat that are Mughal-inspired, minutely detailed and exceptionally chic.  Bhagat, the premier haute-joaillier of India designs jewels that have a personality of their own: classical yet contemporary and ancient gems in modern settings.  A stunning ‘Swag’ necklace centres on a magnificent pear-shaped Golconda diamond on six rows of lustrous, perfectly matched natural pearls.   The piece de résistance of the Bhagat âtelier is a ‘Kalgi’ brooch – a modern interpretation of a classical Mughal turban jewel.  At the centre is an exquisite antique heart-shaped emerald carved with a lily flower in full bloom surmounted with diamond lotus flower buds and a tapering stem set with baguette diamonds.

India: Jewels that Enchanted the World celebrates five hundred years of superb design and outstanding craftsmanship: a tapestry of fairy tales, stories of royal rivalries and intrigues, all told against a background of the colourful fabrics, and the smells and sounds of India’s bazaars.   Through the display of exquisite jewels and jewelled objects, it conjures up the beauty and refinement of Indian taste that has enchanted the world for thousands of years.