RADIANT LIGHT STAINED GLASS FROM CANTERBURY CATHEDRAL AT THE CLOISTERS

This exhibition of stained glass from England's historic Canterbury Cathedral features six Romanesque-period windows that have never left the cathedral precincts since their creation in 1178–80. 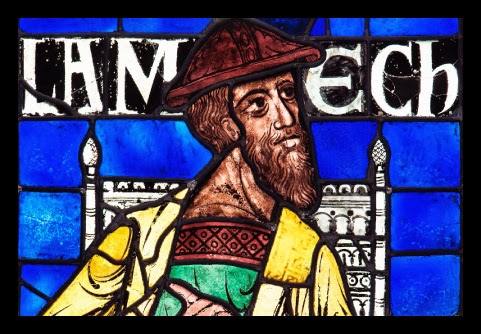 
Founded in 597, Canterbury Cathedral is one of the oldest Christian structures in England. It was an important pilgrimage site in the Middle Ages—as witnessed by Geoffrey Chaucer's Canterbury Tales, a literary masterpiece from the fourteenth century—and is also the cathedral of the Archbishop of Canterbury, the leader of the Church of England and the Anglican Communion worldwide. Recent repairs to the stonework of the magnificent historic structure necessitated the removal of several delicate stained-glass windows of unparalleled beauty. While the restoration of the walls has been undertaken, the stained glass has also been conserved.

The windows shown at The Cloisters are from the clerestory of the cathedral's choir, east transepts, and Trinity Chapel. The six figures—Jared, Lamech, Thara, Abraham, Noah, and Phalec—were part of an original cycle of eighty-six ancestors of Christ, the most comprehensive stained-glass cycle known in art history. One complete window (Thara and Abraham), rising nearly twelve feet high, is shown with its associated rich foliate border.
Masterpieces of Romanesque art, these imposing figures exude an aura of dignified power. The angular limbs, the form-defining drapery, and the encompassing folds of the mantles all add a sculptural quality to the majestic figures. The glass painting, which is attributed to the Methuselah Master, is striking for its fluid lines, clear forms, and brilliant use of color.