A DICTIONARY TAKES US THROUGH THE FASCINATING HISTORY OF SYMBOLS

Juan Eduardo Cirlot’s A Dictionary of Symbols has been an invaluable resource for decoding symbols since it was first published in 1958. 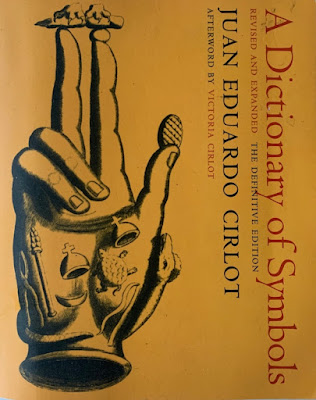 The 20th century gave us works that defied traditions across the arts: for instance, Igor Stravinsky’s 1913 The Rite of Spring, a ballet whose setting, in a pagan world, and enactment of human sacrifice caused a riot at the time; T. S. Eliot’s 1922 poem The Wasteland, which used the legend of the Holy Grail as a metaphor for the decay of modern society; Hilma af Klint’s large-scale paintings expressing her own vision of cosmogony and cosmography; and the Surrealists’ exploration of the unconscious.

Yet, none of these artists fully broke from the past, as symbols anchored all of their works in a millennia-long tradition. Juan Eduardo Cirlot’s A Dictionary of Symbols has been an invaluable resource for decoding these since it was first published in 1958, and translated into English in 1962. Regularly updated over the following decades, the entries that comprise A Dictionary of Symbols range from mundane to esoteric. In September 2020, New York Review Books issued a new English-language edition of the book, which is billed as being in its “original, significantly enlarged form,” never before published in English. The previous English editions are based on Jack Sage’s 1962 translation, while Cirlot himself kept adding new symbols in his monumental analysis until his death in 1971. In this new edition, translator Valerie Miles integrates Jack Sage’s version.

Born in Barcelona in 1916, Cirlot was a composer, a musicologist, an art critic, a translator, and a collector of antique swords. In the 1940s he became well-acquainted with, and translated the poetry of, avant-garde writers such as Paul Éluard, André Breton, and Antonin Artaud.

It was during this period that he became familiar with Surrealism and Dadaism. By their very nature, both movements reflected an affinity with eclectic spiritualism so it’s unsurprising that he was drawn to these elements. In 1949 he traveled to Paris, where he met Breton. His first treatise on Stravinsky was published that same year, followed by several works of art criticism: The Art of Gaudí (1950), Abstract Painting (1951), 20th Century Style (1952), and Introduction to Surrealism (1953). An eager learner, he was introduced to the science of symbology in the early 1950s by German ethnologist and musicologist Marius Schneider; however, his connection with Dada and Surrealism had already primed him for a profound interest in symbology — in 1954, he published The Eye in Mythology, the precursor to A Dictionary of Symbols.

A Dictionary of Symbols mirrors Cirlot’s manifold interests, sometimes making the reader feel overstimulated. The hundreds of symbols encompass Western and Eastern mythology and religion, as well as astrology, alchemy, mysticism, and popular divination tools such as the tarot. Among the more modern sources, Freud and Jung are often cited, alongside Surrealist painters and writers.

In the entry “The Eye” (which Cirlot had already discussed in The Eye in Mythology), he starts off by citing the late-antiquity philosopher Plotinus before exploring associations between the eye and the sun and light; these relationships indicate the intelligence of the spirit, which manifests across various religions and mythologies in the idea of the “divine eye.” He goes on to note perceptions of eyes by Ancient Egyptians as celestial vessels — a motif reprised, he explains, by René Magritte — as well as the anatomical movement, multiplication, or subtraction of eyes in gods, monsters, and demons.

This encyclopedic description is characteristic of the book’s longer entries, which double as delightful short essays. However, as critic Catherine D. Rau wrote in a 1962 review, “it is only by reading through the volume steadily that one can become aware of the intricate interrelations of symbolic meanings.” The reader can develop such awareness by starting off with any random entry.

I began by looking into the Caduceus, the staff carried by the god Hermes, which has two serpents entwined around it and is surmounted by a pair of small wings or a winged helmet. According to Greek mythology, God intervened with his wand in a fight between the two reptiles, which caused them to coil around the staff. Traditionally, it has come to represent power resulting from the balance of opposite elements (the serpents and the wings) and the four elements themselves — earth, fire, water, and air. The staff symbolizes the axis mundi, the axis of the earth’s rotation as the center of the cosmos, which is a recurring motif across religions and mythologies worldwide.

From Caduceus, I gravitated toward the Dragon, which can have a snake-like appearance, and embodies a primordial enemy tamed by heroes and saints associated with the sun. So what differentiates the Dragon from the Serpent? The Snake is symbolic of energy itself, and was indicative of Chthonic female deities that pre-dated celestial ones. The Dragon is connected with the Serpent as well, as both are associated with the axis mundi.

From the fantastical Dragon, Cirlot makes his way to the symbolism of worldly creatures. Turtles, for example, represent the physical cosmos in the Far East and the massa confusa (state of chaos) in alchemy. Its slow pace symbolizes the value of temperance and the natural course of evolution, over which we have no control.

Other entries are frustratingly brief. For the Staff — which, in symbology and art, is as prominent as the sword — Cirlot barely sketches a mythological and historical background. Yet we do learn that Dalí incorporated it as a crutch in paintings such as “Sleep” (1937). In general, however, the author favors mythology, religion, and psychoanalysis over the visual arts as sources. With the exception of the Surrealists (particularly Magritte and Dalí), Hieronymus Bosch, and a few others, he seldom refers to paintings and sculptures, which is a pity because they provide an accessible way to explain many symbols.

This new edition could not come at a better time. With COVID-19 bringing life to a halt for many people, the simple act of sifting through this sprawling book is a reminder of the underlying continuities between world cultures, despite upheavals, wars, and catastrophes. A Dictionary of Symbols guides us through what unites us across nations, religions, and literary and artistic traditions.

In the wake of the COVID pandemic, the world has witnessed a massive resurgence in religious and spiritual faith. When churches, mosques, and temples across the world were closed to the public, people resorted to praying more, reports JWT Intelligence. While the phenomenon is billed as “religious coping” in face of adversity, it does indeed trace a continuity with tradition, and it’s not an overstatement to say that all religions make large use of symbols — Christianity, Islam, Judaism, Hinduism, and even neo-paganism, for example, contain references to the axis mundi. Yet interest in symbols and archetypes is not just a response to COVID-19, but also a broader sign of our times, in which spirituality, symbols, and a fascination with the occult, have assumed renewed significance. (See, for instance, the book Strange Rites, which, on top of studying the spiritualism-renaissance of the 21st century, seeks to single out the ritualistic component of even the most mundane lifestyle phenomena.)

As our freedom of roaming have become more and more limited, and the world’s problems increasingly seem out of our individual control, Cirlot’s fascinating book can take us on an allegorical and esoteric journey.