ALL CREATURES GREAT AND SMALL .THEME FROM THE BBC TV SERIES (JOHNNY PEARSON) 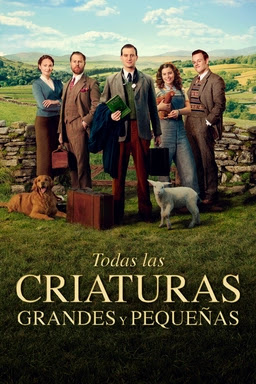 All Creatures Great and Small is a 2020 television series based upon the books about a Yorkshire vet, written by Alf Wight under the pen name of James Herriot. The series, which also consists of a special Christmas episode, has been filmed in conjunction with the 50th anniversary of the publication of the first book in the James Herriot series.[1]

The show revolves around a trio of veterinary surgeons working in the Yorkshire Dales. Siegfried Farnon (described as an "eccentric"), hires James Herriot into his veterinary practice at Skeldale House. Besides Siegfried and James, there is Siegfried's younger brother, Tristan, and Mrs Hall, the housekeeper at Skeldale House

The series, which was shot in the Yorkshire Dales, is produced by Playground Entertainment for Channel 5 in the United Kingdom, and PBS in the United States.[7] The BBC series which was broadcast between 1978 and 1990, was filmed largely in the northern part of the Dales (Wensleydale and Swaledale), whereas the new series has been filmed further south in the national park (around Nidderdale).[8][9] Grassington in Wharfedale has been used as the setting for the fictional town of Darrowby (Askrigg was used in the BBC series).[10]

A six-episode series and a Christmas special were filmed in 2019 and also in early 2020.[11] All Creatures Great and Small has been renewed for a second series.[12]

The first episode was watched by 3.3 million viewers overnight and earned an audience share of 20.4%, making All Creatures Great and Small Channel 5's highest rated show since February 2016.[12] On the other hand, by using BARB's consolidated ratings for programmes watched live and on catch-up services (within 28 days), then All Creatures Great and Small becomes their most popular show ever with the episode on 1 September 2020 now getting 5.4 million viewers (up from 5.01m over a 7-day period) with a further 1.2 million watching the repeat on the Sunday night.[16]

The Daily Telegraph's Michael Hogan gave the show four out of five stars, and commented "Revisiting the world of All Creatures Great and Small felt like meeting old friends. Any viewers missing the classic triumvirate of Robert Hardy, Christopher Timothy and Peter Davison were surely converted by this well-crafted opener, confidently directed by Downton Abbey alumnus Brian Percival."[17] Hogan went on to call the show "family-friendly comfort-viewing. A soothing balm in febrile times."[17]